Ouch. We are looking in to it.
Principal Software Engineer at Raspberry Pi (Trading) Ltd.
Working in the Applications Team.

Please post a full sudo lsusb -v listing for your SSD. On 0137a8 with a Sabrent USB-SATA adapter, I get 350MB/s in the same test.
Rockets are loud.
https://astro-pi.org

It seems to vary wildly with the drive!

Are there any errors in dmesg after the drive's been accessed in a slow fashion?
Rockets are loud.
https://astro-pi.org

If you have a usb3.0 hub available, what happens when you plug the SSD with poor performance into a hub port instead of the Pi4 USB3.0 port?
Rockets are loud.
https://astro-pi.org

I'm not sure if it's relevant, but in case it is : I've had some very strange things going on with USB3 & SSD / HDD on a Stock firmware Pi 4.

I'm seeing the same performance issues here but with an AirSpy SDR. No problems with the old firmware and downgrading fixes it. Nothing in dmesg or logs.

The reboot after firmware change doesn't seem reliable. It can hang and you need to pull the plug to restart it.

The issue you are experiencing is unrelated to the new VLI firmware. Also, I am unable to reproduce it.
Rockets are loud.
https://astro-pi.org

The issue you are experiencing is unrelated to the new VLI firmware. Also, I am unable to reproduce it.

That's curious you can't reproduce it - apart from the Pi4 and the PSU (Official Pi one), I've swapped everything else out and it still happens. I've found a way around it (gparted) but its just weird.

Anyway, if it's unrelated to the firmware issue, I'll shut up now.

Can you try this:

And see if that changes any of the SSD speeds?
Rockets are loud.
https://astro-pi.org

And see if that changes any of the SSD speeds?

Seeing your post earlier today with the new firmware. I decided to give it a try to see if my power usage dropped. As I was at work at the time I connected over my VPN to run an SSH session. I followed the instructions to install the updated firmware and rebooted.

The Pi didn't come back online. Upon returning home I found the console showing the successful end of the shutdown sequence:

See: Photo of the console

Power usage with the new firmware: 3.3W from 3.6W without 4k enabled and 3.9W to 3.6W with 4k enabled. Sadly when in the Pi enclosure heat build-up seems pretty much the same, though may just take longer.
Last edited by martinrowan on Tue Jul 02, 2019 8:22 pm, edited 2 times in total.

Ding Ding Ding! We have a winner. Yes, this is what the command does. There's some weird interaction between timers/latency entering L1 on the VLI chip's PCIe interface and the xHCI controller not being able to wake up the link. On USB2.0 ports, I've observed significant slowdowns when transferring data to an SSD but no hangs and on the USB3.0 ports we've been able to replicate the bus resets that other people are seeing.
Rockets are loud.
https://astro-pi.org

Someone on Reddit alerted me to the existence of this new firmware, but in addition to telling them my experiences, I've decided I may as well write them here in case they are at all helpful.

The temperature reduction is certainly noticeable, and I am very pleased with it! USB throughput I have not tested.

After flashing the firmware and rebooting, my Pi failed to turn on again. The lights were out. However, unplugging it from the power source and plugging it back in again fixed that. If that's a one-off issue, no big deal.

However, the next issue was more troublesome. I left my Pi idling in Discord with Chromium for about an hour an a half. The screen was locked with /usr/bin/dm-tool lock. When I returned, I found some graphical issue with Chromium - interface stuff missing. Resizing the window seemed to fix it.

But there was another issue, which was that the networking had stopped working. Chromium was returning ERR_NAME_RESOLUTION_FAILED, even for my router's page, and ping was returning nothing. I did sudo service networking reload to see if that would fix it, and it didn't.

At this point, the logical thing to do was to reboot the Pi. Turns out it didn't like that very much and it had a bit of a panic. I'm not going to go typing the whole thing out, but I took a photo, which you should be able to read in case it contains anything helpful. 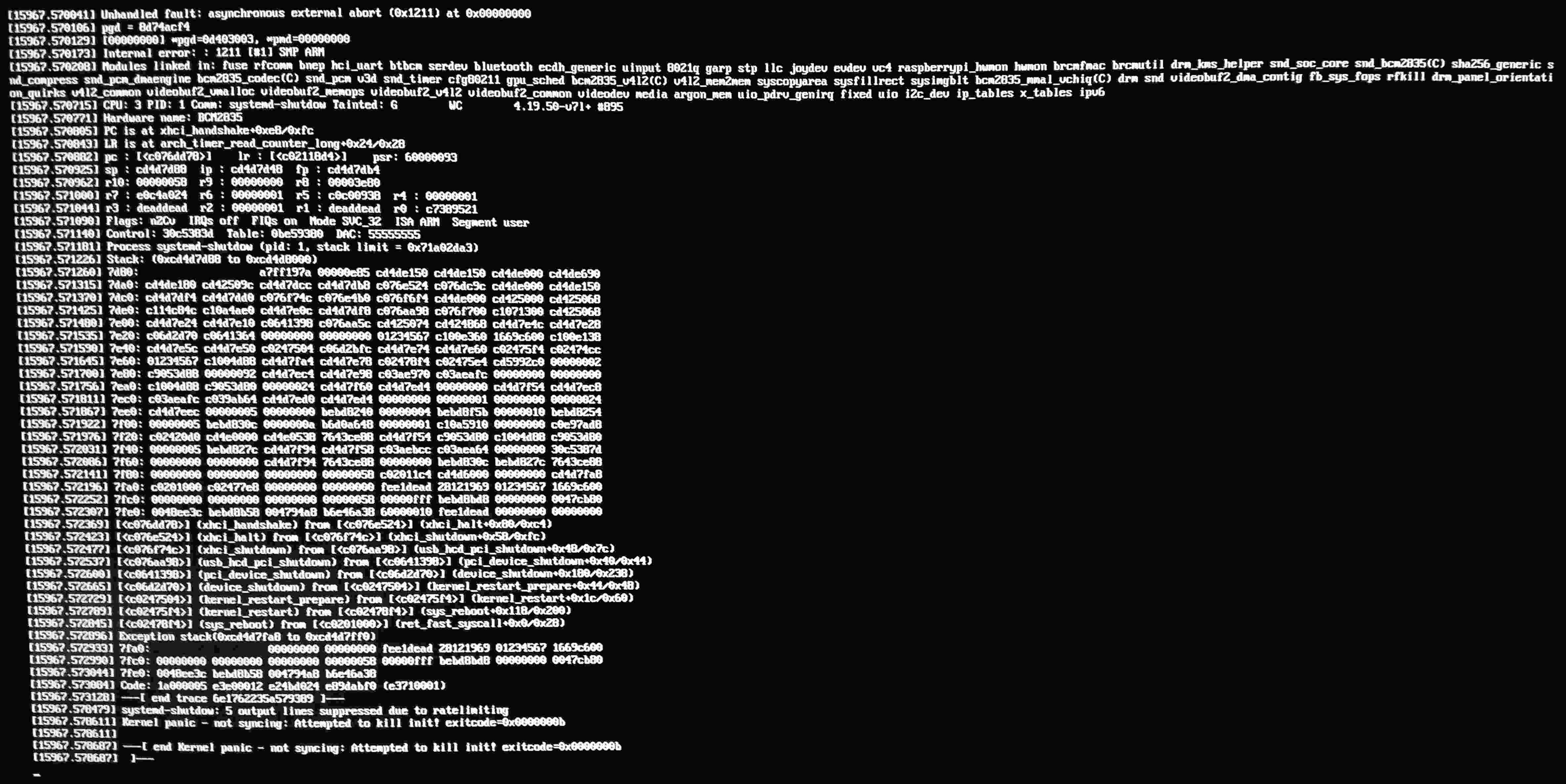 I have now reverted to the older firmware and hope the issues were caused by this new firmware (as it could just be coincidence).

Had a bit fluctuating results in iozone with old AND new firmware on SD-card, USB HD and USB flash drive, running sequential test.


BTW After reflashing old firmware, Pi did not reboot, I had to unplug and plug power-plug.

I tried the new firmware, and it went badly wrong for me.

Flashing the firmware to version 0137a8 returned the error "* Data mismatch". I retried, got the same error.

I rebooted, and saw errors on the screen at boot. Once booted, the USB keyboard and mouse weren't working.

SSH into the Pi, freshly downloaded the firmware, and flashed back to the original. No errors this time. Rebooted, mouse and keyboard now working!

Once bitten.. well, poke it with a stick and see what happens. I tried it again with my fresh download of the new firmware- perhaps the original was corrupted? I got the "* Data mismatch" error again. I tried to flash back to the original, still got the error. Reboot, and no keyboard and mouse once more.

SSH in again, flash with the new firmware, same copy as before - this time it works. Reboot, and I can use keyboard and mouse again!

Can also confirm that USB access speeds to an external HDD dropped from 87.26MB/sec to 33.27 kb/sec.

After the setpci command this increased very slightly to 134.52 kb/sec - still way slower than original.

Reverting back to the original firmware (got another "* Data mismatch" along the way and keyboard/mouse stopped again - reboot, reflash via ssh) and I've now got original speeds back.

Okay. I've done some more testing. I'm still seeing a problem with the new firmware even with the setpci tweak that turns off ASPM L1. Throughput is okay when ASPM L1 disabled but something in the new firmware is messing up timing or latency even with ASPM disabled.

I have this Airspy setup to be an ADS-B receiver which is linked to other receivers nearby for multilateration of aircraft that don't transmit coordinates. You need accurate timestamps of each sample for this to work and the new firmware does something with timing/latency that causes it to fail to synchronise with the other receivers.

I had a quick play with the new firmware last night.

I saw a small reduction in throughput with a SSD in a USB 3 caddy, possibly 10Mb/Sec, 240 down to 230, I cant be too certain on this though.

Like the post above though I have seen odd behavior, I have a wireless keyboard mouse plugged into one of the USB 2 ports, if I plug my USB 3 HDD enclosure into a USB 3 port the mouse and keyboard start to become intermittent, I cant type anything reliably and the mouse movement is jerky.

I didn't get time to try the SetPCi command.

I will see if I can do something a bit more scientific tonight..

My wireless mouse and keyboard from Logitech are conected by USB key and also work fine.

My system is on official Raspberry Pi 4 case, with passive heat sinks installed on the CPU, Wifi/Bluetooth chip, RAM, Motherboard Chipset & video controller. The difference of temperature is significant, currently @ 68/70° C versus 75° C with the old firmware on IDLE mode.

Thank you for this update functional at my home

I hope we will have soon a Raspbian OS in 64 Bits and Optimized frimware and/or OS to get a 4K display.

Thank you for the feedback. We're going to hold back on a wider rollout until we understand (and have a fix for) the poor throughput others have seen, but I'm happy the update is working as intended for your use cases.

We are continuing to work on other performance and power improvements, but a 64-bit kernel for Pi 4 is likely to be released eventually.
Locked
70 posts