Just got a fresh image of Raspbian Jessie for my Raspberry Pi 3 B. Updated everything (apt-get update, apt-get upgrade and rpi-update). I'm trying to stream audio from my iPad to the Raspberry.
Run apt-get install pulseaudio pulseaudio-module-bluetooth (did not use pavucontrol or bluez-firmware).
apt-get install bluez (for pairing visually).
I can connect with my phone and stream, but the sound is too fast, pops, clicks and stops. Seems like a buffer underrun and strange resampling. When turning the Pi3's Wifi off with

The sound becomes good, no glitches, and then it resumes when I reactivate the WiFi with

Has anyone the a2dp streaming working on the RPI 3 with WLAN enabled, and is there anybody with a solution?

Do you think this is a hardware or software issue? You have to consider that previously with a Raspberry Pi2 + a dongle for WiFi and + one for Bluetooth, with the same software installed (pulseaudio 5.0 and Bluez 5.35) I did not have this issue.
Do you think that I should try to install Bluez 5.35, instead of default 5.23?

Pretty sure it is hardware/firmware - if you check the post I linked by emw (s)he can avoid problems by using a bluetooth dongle on their Pi3. I have a bluetooth dongle and when I get the time plan t try it on my Pi3.
Daily driver: Pi3B, 64GB Samsung Evo+ @100MHz, DVB-T, onboard WiFi for internet, BT/USB dongle for KB/mouse, 250GB HDD via USB for media, Raspbian Jessie Lite with Openbox desktop.
Museum: Pi B

Note: bluetooth LE will continue to attempt the connection even after hcitool returns with a timeout error.

Looking at the data on wireshark I see the occasional packet is making it through... but very few.

My current guess is a lot of the logic for wifi is being turned off while BLE is access the radio, but there is a small buffer (which overflows very quickly) so some of the pings make it through. A full data set never makes it through for udp, so it is reported as 0 throughput)

Could any one shed some more light on this, or suggest a work around?

Until no change in firmware (if anyhow possible to solve this from HW pov) workaround is simple.
For now either WiFi or BT dongle is needed to work these two services together reliably.
BTW: I also could not get the built-in WiFi-N to create a fast Wifi hotspot - thus I would try to expermient with external Wifi-N USB dongle. Pi's bluetooth LE - seems to be energy efficient and worth to use.

Personally I have impression that USB bus is the most reliable part of Pi3.

Do you know any WiFi dongle recommended ?

There seem to be some improvement to the wifi operation (at the expense of the bluetooth) in last weeks release of raspbian. You may want to try this for your application.

I can confirm this, and posted this chart of my simple experiment in another thread. 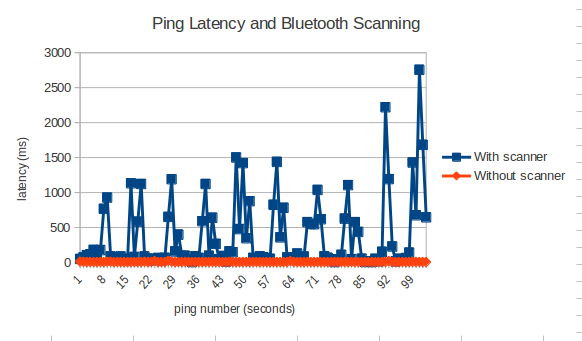