dom wrote:It looks like an X issue (possibly coupled with framebuffer driver) rather than a firmware issue.
Are you sure this is caused by newer firmware? I'm guessing it's always been there.

Older disk images cause this too, so you're probably right, not a firmware issue. Posting a topic to the raspbian sub-forum now.

dom wrote: There is a new hello_pi example, that does video encode (thanks to kulve, who's code this was based on).

Just an observation that currently the owner of the hello_encode directory and files in the hello_pi directory is set to root:root rather than root:users

I have been running with the latest firmware for a couple of days. I still experience kernel oops after playing music for a while, the crash looks similar to the one posted previous in this thread, but below is a shot of the most recent. I am still unable to retrieve the last part of the dump so if anybody has an idea of how to get that I would be grateful. 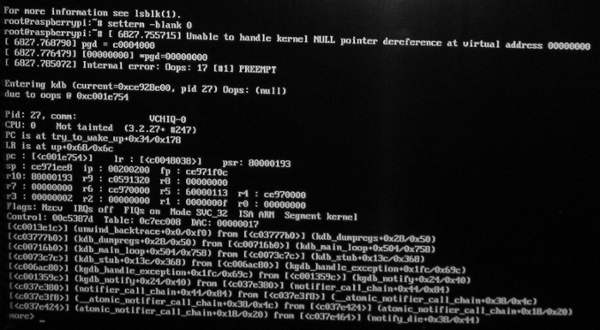 AMOTE - a LIRC client for Android. Build your own Android-based universal remote.

I guess it could be related to this github issue and reported in this forum post.

Hopefully the new vchiq code will fix this? Any estimate on when this will be available again for testing?
AMOTE - a LIRC client for Android. Build your own Android-based universal remote.

There's been some fixes to vchiq. We've also moved to a newer GPU firmware (LKG62) and newer kernel (3.6.6).
There is one issue that the load is reported as 1 until the first vchiq message. You can solve this by entering

Although I believe it is harmess (no cpu is being consumed, it just seems to be due to a kernel task that has been created but not started).

You can upgrade to it with:

Please test and report any problems.

I'm testing a webcam, but now the V4L interface seems to be missing

I noticed we had some differences in kernel modules from 3.2.27, so I've added the missing ones. Any better?

Okay, if you really want to experiment with bleeding edge. Update to latest:

So, ARM has 96M always. GPU has 20M always. The rest is CMA, which
starts on GPU, but is given to arm during boot.

We can also set hwm=lwm so there is a fixed split, if we decide certain use cases run better that way.
However the split can be changed at runtime (note this is currently in bytes, but I'll probably change that):

So, what does that mean?

Good - lots of memory on ARM side (on 512M part). But I can now launch xbmc without rebooting...

Note - this is very experimental. No doubt there will be issues, but let me know what works and what doesn't.
The dynamic changing of the memory split does provoke lots of shuffling of memory pages and may cause a stutter for a second or so.

So basicly we got dynamic memory betwen GPU and CPU (something like intel has with its GMAs) ?
That actually sounds awsome

Have to test this when i'll have the time.

Also i see kernel 3.6.x is mentioned in this thread.. Does this mean its now "fully" working on Pi like the 3.2 or does it lack features ?

hojnikb wrote:Also i see kernel 3.6.x is mentioned in this thread.. Does this mean its now "fully" working on Pi like the 3.2 or does it lack features ?

The "next" kernel tree is on 3.6.7. It's fully working in terms of me not knowing about any problems.
It hasn't had much testing, although I believe OpenELEC and Raspbmc have both produced builds with it that appear to work.

In the 3.6.7 kernel the lirc_rpi module is missing or it was replaced by gpio_ir_recv?

It was missing. I've added to source tree. Will rebuild later. I will need someone to test it still works.

Thanks, I will build it, test and then report if it still works.

Tested now. The lirc_rpi driver works like a charm, thank you.

I upgraded to the latest version
uname -a
Linux rpicam 3.6.7+ #273 PREEMPT Mon Nov 19 19:36:47 GMT 2012 armv6l GNU/Linux
This time there is a problem reporting the GPU firmware version
vcgencmd version
VCHI initialization failed
Is this because I did not change my config.txt or is it a new bug?
The result is the same even if I repeat the vcgencmd version commad.

sudo modprobe uvcvideo
FATAL: Module uvcvideo not found.
So the uvcvideo module seems to be missing for some reason.

Ah yes, some of the config group names have changed in newer kernel, and so large sections of modules we're disabled.
I've added back in various groups and we now have uvcvideo.ko amongst others. Can you try again:

Would this pick up any fixes to uvcvideo.ko in comparison to 3.2? That might fix an issue I am seeing.

arcanon wrote:Would this pick up any fixes to uvcvideo.ko in comparison to 3.2? That might fix an issue I am seeing.

If your problem was in the upstream kernel driver code and it has been fixed upstream, then yes. It seems worth a try.

So the firmware works so far for me and my web cam works. Not 100%, I had to restart a few times, but I don't claim this was super stable on the previous kernel anyhow. The issue is still there HD resolution just hangs in a call to uvc_v4l2_ioctl(VIDIOC_DQBUF).

dom wrote:Ah yes, some of the config group names have changed in newer kernel, and so large sections of modules we're disabled.
I've added back in various groups and we now have uvcvideo.ko amongst others. Can you try again:

Unfortunately even with this very fresh kernel and firmware I still have the problem that mjpg_streamer
works very differently with two rather similar webcams. With a Logitech Notebook Pro it can stream
960x720 15 f/s with a CPU load of 7-8 %. When using a Logitech Quickam Vision then the streaming does not work at all. I only get one frame updated everey few seconds or so. I have not seen any error messages in the logs, that could give a hint of what is causing this problem. Both cameras use the uvcvideo driver. The Logitech Quickam Vision has significantly better image quality so it would be much better to use.

The hdparm program reports the speed of "cached reads" with the flag -T. According to the manual page: "This displays the speed of reading directly from the Linux buffer cache without disk access. This measurement is essentially an indication of the throughput of the processor, cache, and memory of the system under test." Have you noticed that this number tends to vary quite a lot between the different firmware/kernel versions? Do you know why?

dom wrote:Ah yes, some of the config group names have changed in newer kernel, and so large sections of modules we're disabled.
I've added back in various groups and we now have uvcvideo.ko amongst others. Can you try again:

Hi,
I'm having problems with this new firmware.
I have updated with the latest as indicated above. I have also modified cmdline.txt and config.txt as shown below.

I then try a reboot, but this completely fails, terminating at a kdb> prompt, with no activity at all, see image.
I suspect it's my setup; as you can see from the cmdline.txt, I have an external USB drive (self-powered) as sda2, so all of /boot is on the SD card and everything else is on the hard disk.
If I go back to the latest release install by restoring everything on /boot, everything returns to normal operation.
Any suggestions as to what I'm doing wrong?
Regards, Kevin 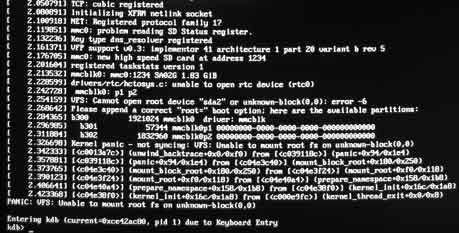 Seems your "rootwait" parameter is being ignored, as with that enabled it is supposed to wait an eternity for the device to appear, instead of 2 seconds.
Try if it works better if you move it before your other parameters, to make sure there is not some kind of character limit truncating the cmdline.txt parameters.

I have installed next firmware and kernle on Arch, but weird things happen in X.
If I enable dyanamic allocation with parameters Dom posted, when X starts all I see is colorful snow.
Without dyanmic allocation, XBMC is shrunk to few centimeters on the left side.

Vulpes wrote:I have installed next firmware and kernle on Arch, but weird things happen in X.
If I enable dyanamic allocation with parameters Dom posted, when X starts all I see is colorful snow.
Without dyanmic allocation, XBMC is shrunk to few centimeters on the left side.

there was a problem with the automatic "mem=" command line parameter in previous version.
Locked
309 posts