Not according to what I see here it isn't! This is what it says in the install-rpi.txt file:

(I didn't know when I wrote the file that you could include multiple packages in the same line).

Yes, but after installing just those, the user will see:

The libSDL2_net library is definitely required:

‘Remember the Golden Rule of Selling: “Do not resort to violence.”’ — McGlashan.
Pronouns: he/him

Well, I've never installed it and BBC BASIC works here (RPi 3 and RPi 4). My system doesn't even recognise the underscore variety of the library, only the hyphen one that my install file specifies:

Are you running regular 32-bit Raspbian Buster or something different?

Anyway I don't like to be that prescriptive. Whilst I would personally choose to install it in a new folder, not everybody might and there's no actual necessity to do so: if you install it in your home directory it will work fine. So I'd rather leave the instructions as they are and let the user choose how and where they want to install it.

Yup. On a system that had never had BBC BASIC on it, so there were no lurking libraries. I'd just pasted in your apt-get lines, put of course couldn't paste them back from history as they start with a space and hence disappear. (bash assumes any entry that starts with a space is something you want forgotten and won't commit it to history.)

I wouldn't have reported it if it weren't a real problem under Raspberry Pi OS.
‘Remember the Golden Rule of Selling: “Do not resort to violence.”’ — McGlashan.
Pronouns: he/him

To work one needs be
in the same directory
as ( I don't know which )
files from the .bbc . zip
It clutters the home directory
to have all those files .
Vs .
1 folder .......
PLUS !
It is easy for a newb ( like me )
to get confused when terminal
commands stop working ......
http://www.hitswares.com/

So you say, but you still haven't told me what you want me to change! My existing install-rpi.txt file does install libsdl2-net, as it always has, so I neither understand what the problem is nor how I am supposed to fix it. I did install BBC BASIC from scratch on a brand new RPi 4 using only the instructions in that file (although I would have typed them in, not copied-and-pasted), and it worked correctly here. Nobody else has reported a similar problem.

If you want me to remove the leading spaces (I had no idea they were significant in bash) or even put the multiple libraries in a single command I can consider that, but neither explains why the existing file is not working for you.

I'm afraid it's the nature of Linux that the installation process requires you to be more knowledgeable and experienced than when installing on the other OSes supported by BBCSDL. The instructions in install-rpi.txt aren't visible until you've figured out how to unzip the downloaded file, and by then you've already committed yourself to what directory they are in! I really don't think it would be helpful to add something like "if you've just unzipped the files into your home directory, delete them and start again"!

The only foolproof solution to your problem would be for me to supply BBC BASIC in a more 'automated' format such as a .deb file that can be installed using apt. I could do that for the Raspberry Pi edition, probably, but not for the generic Linux editions, which I don't want to be specific to any particular 'flavour' of Linux.

The problem easily arises if one ( as I often do )
extract into the downloads folder .

> "if you've just unzipped the files into your home directory,
> delete them and start again" !

The .deb ( especially if in the RPi repository ) would
certainly gain some usage of BBCBasic ....
http://www.hitswares.com/

With the portfolio of 'my' versions of BBC BASIC now being quite large I have created this grid showing which version has which capabilities. The boxes marked ? indicate features of which the version is theoretically capable, but I haven't yet attempted an implementation: 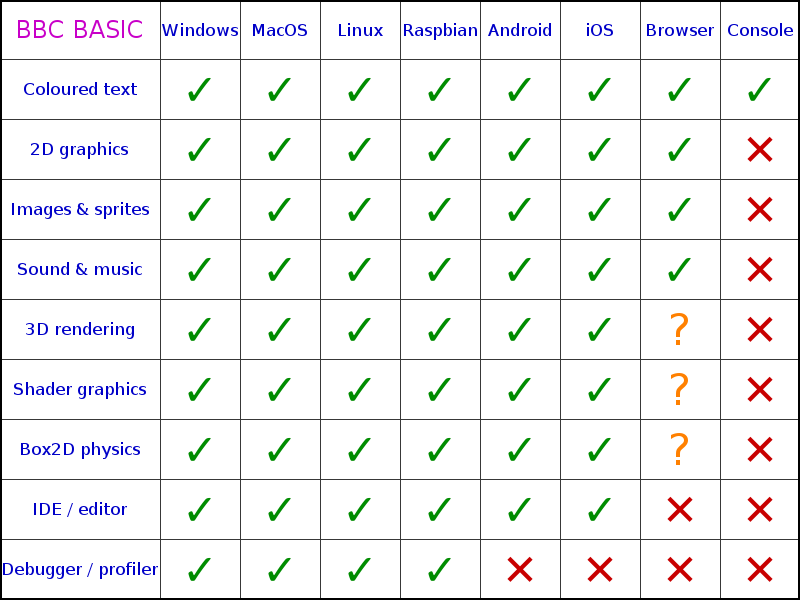 I've released version 1.16a of BBC BASIC for SDL 2.0 - the cross-platform programming language for Windows, MacOS, Linux, Raspbian, Android, iOS and in-browser. This is an interim release to fix a bug and a regression, it affects the 64-bit, ARM and Browser editions only, the 32-bit x86 editions have not been updated:

This new version may be downloaded from the usual location. The GitHub repository has been updated.

I have updated the Console Mode editions of BBC BASIC to version 0.28, to fix a couple of bugs:

Version 0.28 may be downloaded as follows:

The webgllib.bbc library has been written primarily to support 3D graphics on the in-browser (Emscripten / Web Assembly) edition of BBC BASIC for SDL 2.0. Here are some of its features:


I would be interested in your experiences of using this library.

I've released version 1.17a of BBC BASIC for SDL 2.0 - the cross-platform programming language for Windows, MacOS, Linux, Raspbian, Android, iOS and in-browser. The changes in this version are as follows:

This new version may be downloaded, for all the supported platforms, from the usual location. The GitHub repository has been updated (used to build the MacOS, Raspbian, Android, iOS, 64-bit Linux and in-browser editions, currently).

Please remember that if you use the BBC2APK Android Application Generator you should download a new APK template to ensure that any updates to the run-time engine are incorporated in your own apps.

I'm sorry if this is something that can easily be discovered from the manual, but I'm wondering if matrices can be passed as arguments to functions and procedures in current versions of BBC Basic. If so, when was this capability added? In particular, any historical information about which versions support passing matrices as arguments would be appreciated.

Again sorry to bother with such an obvious question, but the historical timeline seems difficult to discover just from web searching.

ejolson wrote: ↑
Fri Oct 23, 2020 4:58 pm
I'm wondering if matrices can be passed as arguments to functions and procedures in current versions of BBC Basic. If so, when was this capability added?

Yes, it was added (along with array arithmetic) in BBC BASIC 5, so quite some time ago (1986 or thereabouts was it?). Since then you've been able to pass arrays/matrices as parameters, make them LOCAL and so on. My 'recent' versions (post 2000) have added the capability of passing an 'undimensioned' array as a parameter and DIMming it in the function or procedure, which can be useful (I don't know why that doesn't work in BBC BASIC 5, but it doesn't).

Nobody reported that regression, I noticed it myself, so evidently the profiler is not widely used. I would commend it (Run... Profile in SDLIDE) for identifying code bottlenecks, especially on a relatively slow machine like the Pi.

Of course identifying a bottleneck doesn't necessarily mean a solution will present itself, but it may; and if there isn't a solution in BASIC you have the option of dropping into assembler code or shader code for that time-critical segment. Incorporating assembler code will inevitably make your program platform-specific, but shader code (which is very much like C but runs on the GPU) is cross-platform.

Judicious use of inline assembler or shader code can result in a program which outperforms most other languages, even if (say) only 1% of the code is converted and the rest remains in interpreted BASIC. It's one of the things that makes BBC BASIC 'noteworthy'.

RichardRussell wrote: ↑
Fri Oct 23, 2020 1:45 pm
Added webgllib.bbc which is substantially compatible with ogllib and gleslib but uses shaders rather than the Fixed Function 3D Pipeline.

I've noted this elsewhere, but just to clarify: the webgllib library (although written to support 3D graphics in the in-browser edition, hence the name) is compatible with all editions of BBCSDL, including the Raspberry Pi. If you want to benefit from the per-pixel specular reflection or spotlight calculations simply change library references from ogllib to webgllib. For example if you change teapot.bbc as below it will significantly improve the rendering quality:

RichardRussell wrote: ↑
Sat Oct 24, 2020 11:54 am
For example if you change teapot.bbc as below it will significantly improve the rendering quality

RichardRussell wrote: ↑
Sat Oct 24, 2020 11:54 am
For example if you change teapot.bbc as below it will significantly improve the rendering quality

Did you record the video animation on the Raspberry Pi or using a separate HDMI recording device?

ejolson wrote: ↑
Mon Oct 26, 2020 5:17 pm
Did you record the video animation on the Raspberry Pi or using a separate HDMI recording device?

The YouTube video? It was recorded off-screen with a camcorder (the moiré patterning from the different sampling grids is visible).

RichardRussell wrote: ↑
Mon Oct 26, 2020 6:05 pm
The YouTube video? It was recorded off-screen with a camcorder (the moiré patterning from the different sampling grids is visible).

Funnily enough I had not even thought about recording the HDMI output of the RPi, so thanks for the suggestion. For comparison purposes, here's a video recorded that way: https://www.youtube.com/watch?v=3WWOWUjZYDE

When the proposal to extend the functionality of the PTR() pseudo-variable was first made I was persuaded - admittedly somewhat reluctantly - to go further by supporting not only specifying a structure parameter but also an array. So currently, in BBCSDL and the Console editions, we have:

It has recently occurred to me that it's somewhat inconsistent to support these options without also being able to do the same with a function or procedure:

I don't suggest that this usage would be particularly valuable, but then nor are some of the other extended uses for PTR(), but it would be difficult to justify arbitrarily omitting it. So I propose to add this extension-to-the-extension in a future release, unless anybody has an objection.

This rather contrived test program shows one way in which it could be used:

Return to “Other programming languages”