I'm very happy to tell you that SqueezePlug for Raspberry Pi version 6 is now ready for download. I've changed a lot of details in the scripts, addressing both, usability and functions.

Why different versions?
There are two versions of SqueezePlug 6: One Hard-Float (the standard version) and one Soft-Float. Hard-Float will give you an extra kick of performance, Soft-Float the compatibility to things not supported for Hard-Float, like Spotify and others. You can't switch between these versions, you have to decide in the beginning. If you don't like to use graphical x-stuff, which is unnecessary for SqueezePlug the performance of the Soft-Float version is absolutely o.k. So choose the Soft-Float version only if you like to use Spotify or some other Hard-Float incompatible software. It will be also possible to "upgrade" from the foundation images to Squeezeplug in near future.

And SqueezePlug is a platform for different Media-clients or players:
- SqueezeSlave
- SqueezeLite
- SqueezePlay (experimental)
- Shairport
- Omxplayer

All these servers and players are ready to install by just a click.

All official Raspbian / Wheezy features like X-Server are available, nothing is purged by default. X-Server stuff can be deleted automatically if you like.

How to install SqueezePlug?
The Image comes as 3 GB! So it fits on 4 GB SD-Cards, not on 2 GB. 3 GB is chosen for compatibility with different sizes of 4 GB SD-Cards. You should expand the SD-Card to it's full size during the initial setup.

1. Download, unzip and burn the sd-card
2. Start the Pi and find out the IP-Address (e.g. from an attached monitor, from your router or a tools like Advanced IP Scanner v2).
3. login with user: root and pw: nosoup4u
4. Follow the initial steps
a. Update SqueezePlug
b. Expand the Root-Filesystem to the maximum SD-Card size
5. type "setup" and choose the options you need and the scripts will do the rest for you.

I'll update my Wiki and videos later to regarding Raspberry Pi version 6.

There will be no more new images for SheevaPlug, DockStar and GoFlex Net!

Thx a lot for working so hard! Can hardly wait to unpack but testing will start in 2013.

(By the way, what's driving you, to work so hard on this?)
So far all that remains is to wish you "einen guten Rutsch"

Yeah I understand but do i need Spotify PREMIUM???

I will install and test this out later today. Hopefully this fixes my issue with my USB DAC. Thanks, Thomas!

Very exciting! Many thanks for all your hard work Thomas - donation it's way very soon.
Now I'm just waiting for the download link for the softfloat version to appear on your blog

Win32diskimager gave me the following error:

Another Not Enough Space error on 4gb ...

I don't want the SF version!

So i need a 8 GB SD Card for this image?

The Soft-Float version is also uploaded.

What about the non fitting SD-Cards? Do all of you have this issue? Maybe I have to investigate it. For me 4 GB cards work fine. did you also try this tool?

Please report back, we will find a solution!
truehl
http://www.squeezeplug.de

I'll make a new image on another SD-Card type also 4 GB and I'll upload it when finished! It will last some more hours!
truehl
http://www.squeezeplug.de

Now about to put it in the RPi.

Did you set this option in the USB-Image Tool? 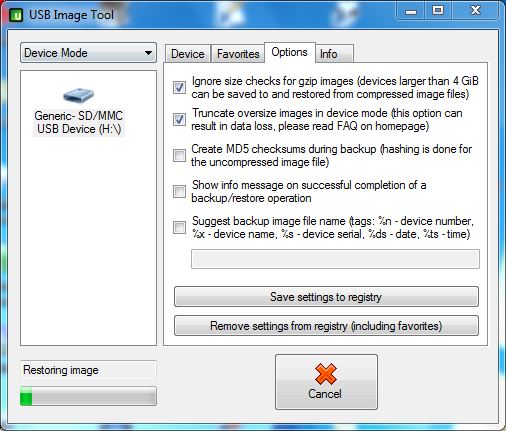 o.k. then we leave it for this year! More next year!

We should take a look at this issue next year! Which DAC do you use and which player?
truehl
http://www.squeezeplug.de

I'm using a Fiio E10 and SqueezeLite. My plan is to get an objectiveDAC and make a homebuilt Logitech Transporter with the raspberry pi and the ODAC. I'm testing it with the Fiio first before investing in the ODAC

onefatsurfer wrote:I'm using a Fiio E10 and SqueezeLite. My plan is to get an objectiveDAC and make a homebuilt Logitech Transporter with the raspberry pi and the ODAC. I'm testing it with the Fiio first before investing in the ODAC

Please paste the output of

o.k. then we leave it for this year! More next year!

Truehl,
Thank you for all your hard work! Squeezeplug is exactly what I've been looking for! Sorry to bother you, but I am trying to use a Creative xmod usb dac to improve the sound of my raspi but the audio that I am able to get out is very scratchy and low quality. Any ideas? Also, squeeze lite doesn't seem to be starting upon boot.
Thanks again!
Locked
542 posts