If you're looking for a real one button start/stop with power shutoff, you need to go here instead.viewtopic.php?f=91&t=129357

I have not seen any simple ones that combine the two. One button to put the Pi in a halt state, and the same button to re-start it again.
Here is such a solution. 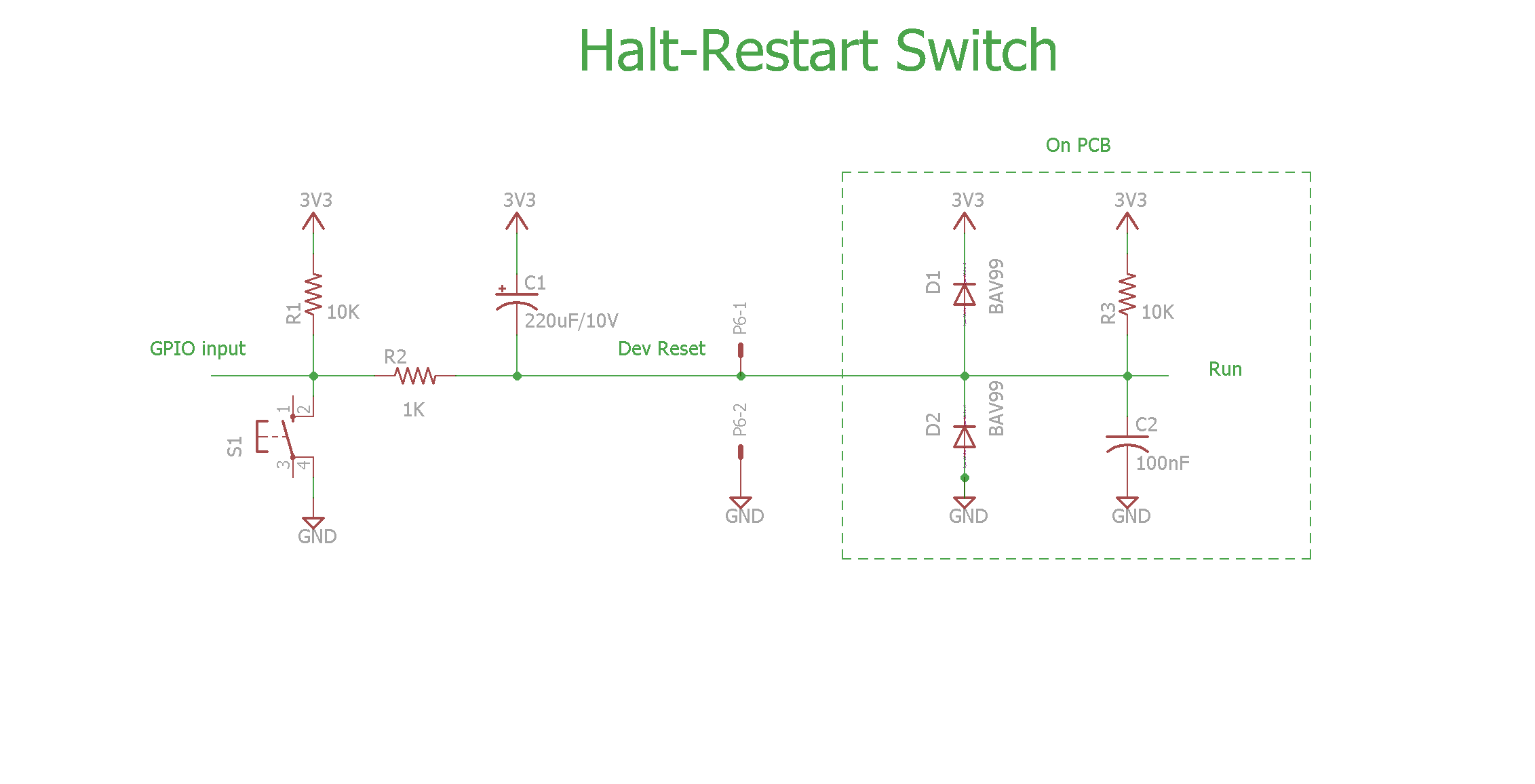 The schematic is simple. The P6 connector is used to wake the Pi up, and a small Python script is used to put it to sleep. The Python script listens to a GPIO input pin to start the shutdown to halt sequence.

The trick is to use one button to do both. This is where R2 and C1 come into play. The P6-1 pin needs to be high for the Pi to run. Bringing it low (<0.5V) without any precautions will send the Pi to sleep - immediately. Warning! Without a proper shutdown! The circuit will prevent that from happening accidentally.

When you power-up the Pi, it will start to boot normally and at the end of the boot sequence, the Python script is activated by cron. To install the script, do the following:

Go to the end of the file and add the following:

After a reboot, the python script is now active and is waiting for an interrupt that will be coming from the input pin.
A quick pulse from the button (< 0.5 second) is already enough to trigger the halt sequence, but not enough to drain C1 to get the run pin below .5V. The script shuts the Pi down and puts it in the Halt state. It still consumes power though. My Model(1) B still pulls about 70mA.
You can now safely remove the power from the Pi.

If you want to restart it from the halt state instead, a press of about 2 Sec. duration or more is enough to drain C2 and to re-start the Pi as soon as you release the button. The Pi will now go through an abbreviated power-up sequence.

The following Python script can be used to execute the halt state request and properly "Halt" the RPi so it can be restarted again with a next button press.

Copy and paste this into the open editor:

You'll notice that I used a rather unusual GPIO pin, namely GPIO-28 which is pin-3 from the "unstuffed" P5 connector. The reason is that I still use several Model (1) B's and I can keep P1 free.

It should be fairly simple to mount a push button to the housing of a Pi box.
Adding the two resistors, and the capacitor should not be too difficult as well. The required connections to 3V3(P5-2), GND(P5-7) and the GPIO pin(P5-3) can all be made to the P5 connector. The only other connection must be made to J6-1, which is the pin (or rather the hole) closest to the edge of the PCB.

You now have a permanent way to halt and restart the Pi, especially handy when it is running headless.

Rather than installing the daemon the now old-fashioned way through cron, here is the now modern version using systemd.

Copy and past the following into the open editor:

Note that like with the init.d scripts and cron before, you should always use the full path to the executable's and the target files.
Because there is no "before" or "after" specified, systemd will pick the time and place in the boot process. In this case, we don't care.
You now need to enable the service at boot:

The text after Description= gets displayed on the console and as an entry in the /var/log/syslog file :

The status can be queried by:

Although the simple start through cron is easier and quicker to setup, it does not allow any control or status reporting.

My vote goes to systemd!

Is this still valid for the pi3?

I have not tried it recently with the latest OS version, but there is no reason why not.
Give it a try!

Sorry for adding a question to a rather old post.
I'd like to know if it's possible to use "classic" P1 connector and another GPIO for the purpose. I mean I prefer to get 3v3, GND and GPIO from there instead of soldering something on P5. I already have P6 (reset) soldered but I'd like to avoid to add another connector due to my fairly imprecise soldering skills.
Are there any drawbacks for it ?

Hi Ben, you can use just about any free GPIO pin, although I recommend to stay away from the special ones.
Just give it a try, you won't cause any problems, as long as you don't short pins together while soldering.
Locked
6 posts • Page 1 of 1