Here is my solution for racking Raspberry Pis, using a block of plyboard
and the audio and video jacks as mounts. This allows simple plugging in and out. 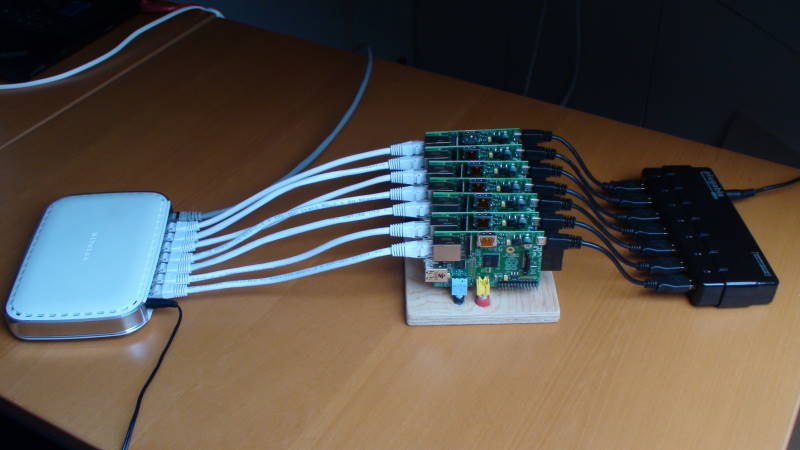 I used a Netgear 8 port switch, and a Plugable USB 3.0 7-Port Hub for power
(which works as long as you don't intent to add further USB devices). 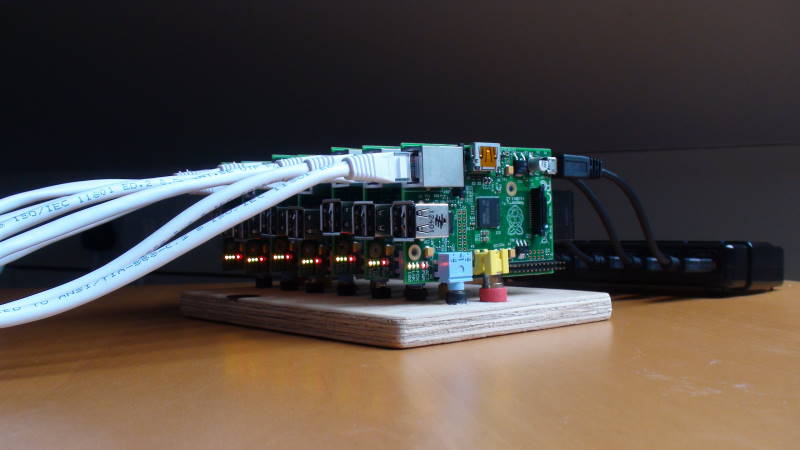 NIce and neat. Any chance of a pic without the Pi's plugged in.

wow, Set them up to do distebuted computing, and youve got yourself the most amazing pi computer ever

tidy.
note: I may or may not know what I'm talking about...

It appeals to my sense of tidiness and completeness. Well done.

Pictures of the board without the Pis, particularly for Jb2cool. 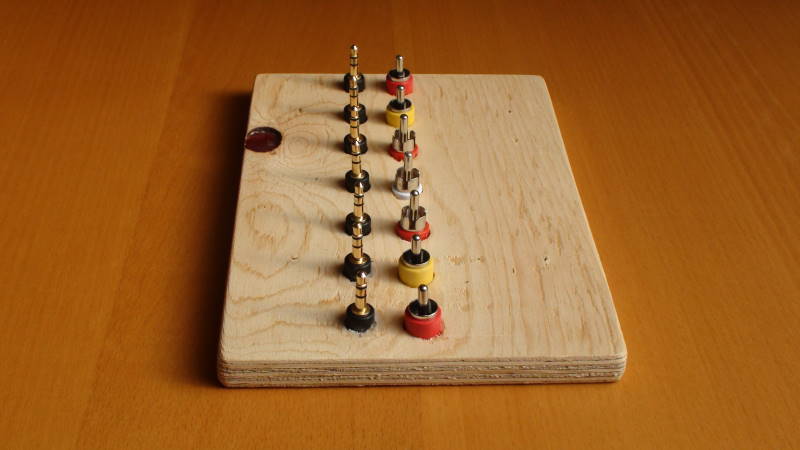 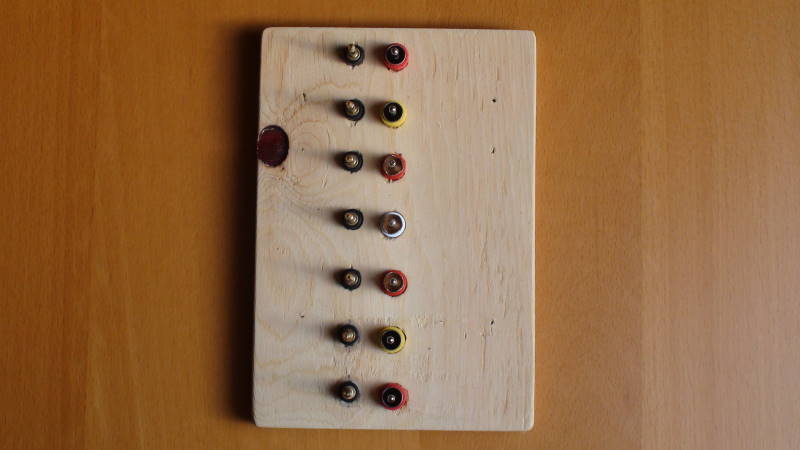 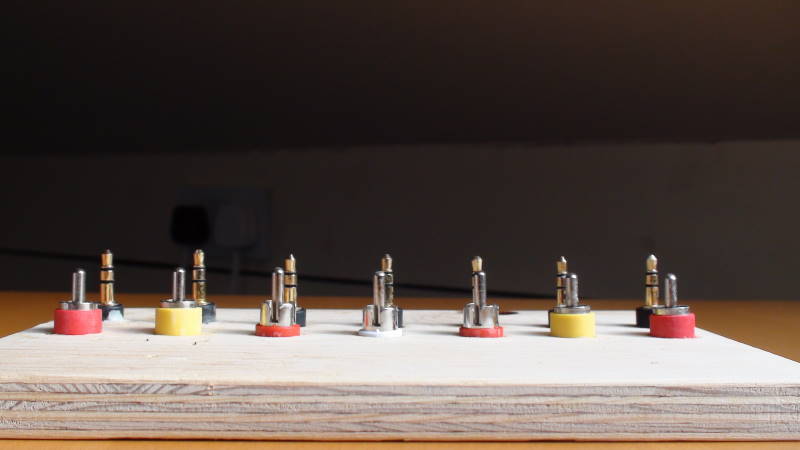 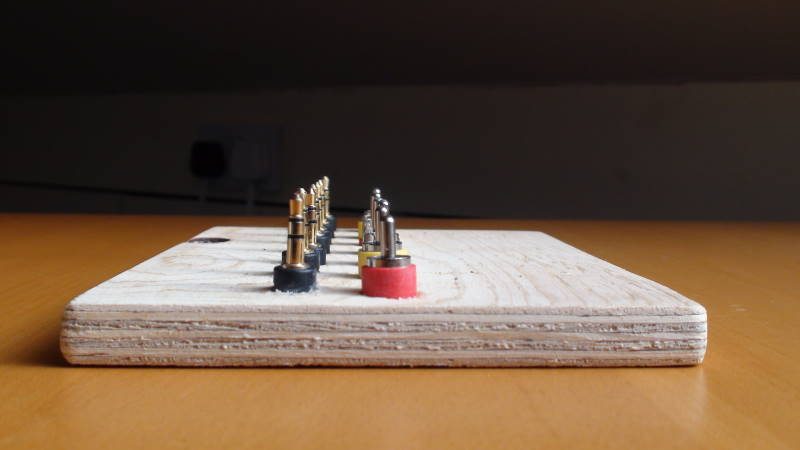 The back is not so neat - but, no one will see that: 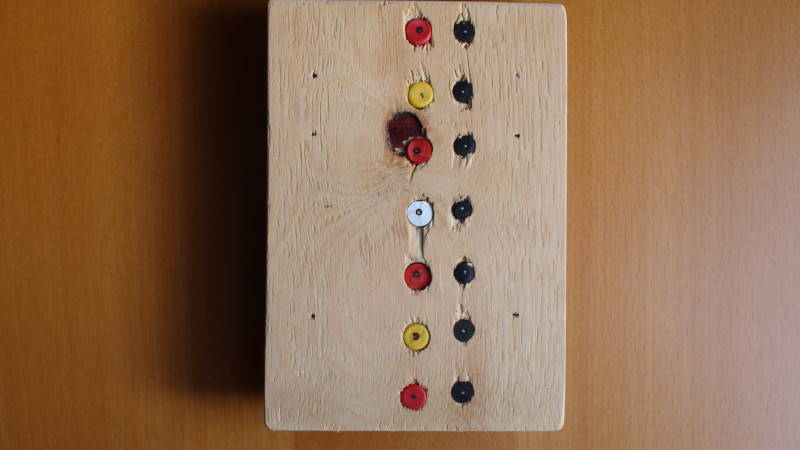 Tools used, and a little PVA glue, the drill bits are 9mm and 11mm for audio and video, respectively. 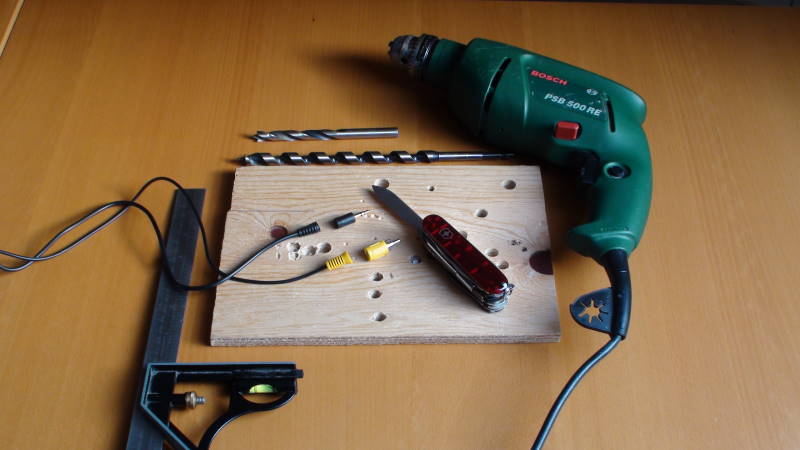 A vertical bench drill, would have helped keep the holes true, but I could only use what was at my
disposal.

The biggest problem overall, was obtaining 7 UTP and USB cables all the same length, I ordered
20cm, but didn't always get it.

Thanks, that is such a nice idea.

Niceley done. So clean compared to some of the other multi-pi holders.

Probably a dumb question, but what is the advantage of having so many Raspberry Pi's? I've seen lots of pictures of people that have hooked up one (or more) pi to another, but I haven't been able to find a reason to it.

Could be anything from clustered computing to hosting a different service (website, FTP, etc.) on each one. Even something like a classroom environment where each student SSHes to a different Pi.

Nannerman wrote:Niceley done. So clean compared to some of the other multi-pi holders.

Probably a dumb question, but what is the advantage of having so many Raspberry Pi's? I've seen lots of pictures of people that have hooked up one (or more) pi to another, but I haven't been able to find a reason to it.

I have three Pi's all neatly stacked (in identical, but different coloured cases).

One is an HTTP/IMAP/SMTP/FTP/SSH/stuff server, one is an IRC server, and one is my 'development' unit where I test Baked Raspberry Pi Mod and other things (that one gets re-imaged every few days while I'm testing modules and installing/uninstalling packages and things.

One dedicated to being an IP PBX (Asterisk), one being an XBMC media center, and maybe another one or two for various things.

The low power use of these things is incredible, as is the small size, the fact they are totally silent, and because they are so cheap, it is very viable to have one per task (or set of tasks).

Previously I ran a Sempron 3000+ laptop as my 'server' doing everything, and it had fan noise, and used more power than 10x Raspberry Pi's, and if I borked the system, it took down EVERYTHING. (It wasn't able to run virtualisation to suit my needs).

Okay, that makes sense. I was overthinking it.
Thanks for explaining it.

Personally, the Pis are allowing me to experiment with integrating and configurating
a stack of Open Source Application Lifecycle Management (ALM) tools, one instance per
server, in much the same way as done in large industrial scale installations, using
much the same operating systems and toolsets, but at a minute fraction of the costs
in terms of hardware, power, space and other overheads. And, I'm completely at liberty
to pursue the avenues of my choice, without any of the influences I might normally need
to consider.

The Pi is indeed a great learning tool!

I don't have much space, so one of the first challenges was how to neatly group them, after
a number of failed attempts I struct on this one, which neatly fits on half a shelf of my Billy
bookcase, and thought it might just save others some agony.

This is perfect! Been looking for a solution to power 3 raspberry pi's (using http://www.amazon.com/gp/product/B00BGUE4W8).

The Simple Pi Rack has been redesigned, the network switch and USB powered hub are now underneath, and the Pis are mounted on the HDMI connector. It all now fits neatly on a desk beside other kit, and into a shoe-box (along with PSUs and cables), for easy transporation, without any need for dismantling. See the Simple Pi Rack Mk II at:

You mentioned that you used audio and video jack as mount. But I still did not understand how you did fastness to Pi. Could you show more details? Thanks in advance.

Apologies for taking so long to reply. I think you probably mean fasten, so perhaps the following picture will help: 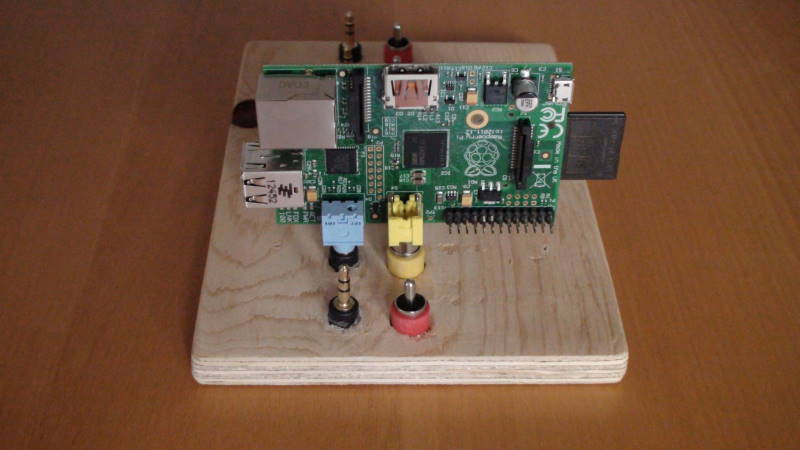 However, I now find it simpler and sturdier to use the HDMI connector. It helps reduce the height, makes it easier to get access to the SD card and USB sockets without cables getting in the way, and the edge of the card now rests snugly on the wooden plate: 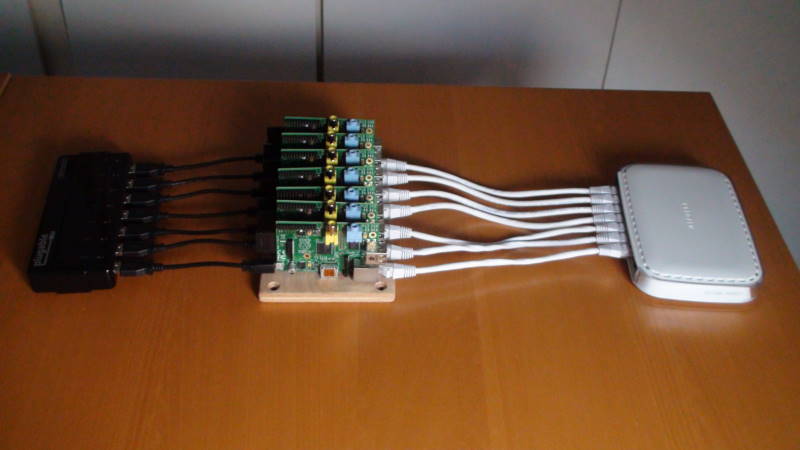 Isn't it a bad idea to let solder points support the weight of the entire device? Granted, they're not moving around, and there's not much weight there, it just doesn't seem like a good idea to me.

This post went up last year, have there been any problems since?

The solder points seem remarkably robust, and with the expected insertion and removal of
cables, must have been designed to take a fair amount of strain. In this arrangement, and
under normal usage, we can expect only the occassional removal of the ethernet, usb, power or
SD card, and as long as you hold the Pi steady while doing that, I would expect very little
strain on the solder points.

Most of the time the rack of Pis will sit neatly doing what they are asked, and there have
been no problems.

Another powering option is using a PSU with a standard 2.1mm DC connector.
We do adaptor cables and splitter:

Just to let readers of this forum topic know that the Simple Pi Rack has now been substantially redesigned and incorporates a PSU and relay switch as suggested by BMS Doug (discussed in the topic Simple Pi Rack Mk II), an enclosing case and a number of others features. A new forum topic has been added at: Simple Pi Rack 3.

I was always interested in doing something like this. I would have to start small and then eventually move into a heated sea-can. But, I am curious about this set up you have here. I am wondering how much you can earn in a 24 hour period with that set up you have in this thread alone. I hope you don't mind me asking, I just want to se if it will be worth it for me. Thanks.
Nelson
CryptoKing
Locked
25 posts • Page 1 of 1