You can try and update the entire display in one transfer.
Make a buffer that holds a start byte and the entire video memory, and send it in one go.
This will give you at least a 30% boost for a full display update.
If this is fast enough, you can let all your pixel functions write to this buffer, and then do a update when needed.
It is also possible to just do a partial update of the display, if a full update is not needed.

This is how a Linux framebuffer works: The application writes to a buffer and the driver scans this out to the display at regular intervals or in the case of FBTFT; when the memory is altered.

I still getting my head into the code to support a frame buffer on the RPi, I have installed the fbtft driver and see the response to the various SPI commands. I was just wondering if anyone has used the https://github.com/notro/fbtft_test on the hy28a display, I tried to use it but it did not like the driver /dev/spidev0.0 and then could not see how to confirm it for the hy28a display.

I was just wondering if anyone has used the https://github.com/notro/fbtft_test on the hy28a display

That is where I keep the scripts I use for testing my displays with FBTFT.
It started with test_fb.py which writes some patterns directly to the Linux framebuffer. In the case of FBTFT, it will be run like this:

It does not contain scripts that talk directly with the displays through SPI.

The hy28a_test script matches a setup I have, and is used to test the fb_ili9320 kernel driver when I have made changes.

Talking about drivers can be a bit confusing without context. There are two main categories of drivers: kernel drivers and userspace drivers (ordinary applications).
A kernel driver can talk directly to the Linux SPI subsystem (spi_write()).
A userspace driver has to go through the spidev module (/dev/spidev0.0)
A third option is also available on the Pi: writing directly to the hardware registers from userspace, as the bcm2835 library does.

So when it comes to these SPI displays there are two ways to get something displayed:
* Use a Linux kernel framebuffer driver that sets up videomemory at /dev/fbX and takes care of keeping the display in sync with this video memory (framebuffer).
* Use an application (or library) that talks directly to the display through /dev/spidevX.X. Such a library can also be modelled like the Linux kernel framebuffer subsystem fbdev. But the usual way is to write each pixel directly to the display.

https://github.com/topogigio/HY28A-LCDB-Drivers for instance, writes one pixel at a time using the bcm2835 library, which talks directly to the hardware registers on the Pi. Completly bypassing the Linux SPI subsystem

Notro, I cannot thank you enough for the reply and the information it's big help. May I should add want I am trying to do, we have a demo with a local school with the RPi and the idea is the children clap and the screen will change a different colour, so it's nothing complex and felt driving the display directly via SPI would be the easiest & quickest way.

Using your demo code and a few tweets to my code, I have the display up and running. My only problem is the time to update the display, it's still slightly on the slow side, the last 20% of the display can be seen to be updated and I really want it to be instanstances response. The display will change colour on the clap immediately and no lag on the updates.

Therefore, not sure if this is just a general issue with the RPi running the display update via SPI, I should work out the maths but I would have thought it would be possible to get immediate display update using the direct SPI interface. There is a couple of posts on the max SPI bus speed for the RPI, running at a max of 1Mhz so this could be quick enough. I did read there are some built in delay into the BCM driver which could cause addition delays, but I have used another method and seeing the same results.

The only other item was the SD card performance, I am not using a very quick SD card at the moment and wondering if using a faster access SD card would improve the performance.

Once again many thanks for all the support and amazing work on the display, I am very impressed with all the work you have put into this and support you provide.,

i have inanbo t2-9320-v11 datasheet in :www.inanbo.com/downfile/tft/28/INANBO-T ... 20-V11.pdf
and i am going to config it by raspberry .but i have some problem. this display is parallel an i decide to use spi to parallel converter(circuit is attached) and the controller is ili9320 .
can u help me about a driver of this display ??? 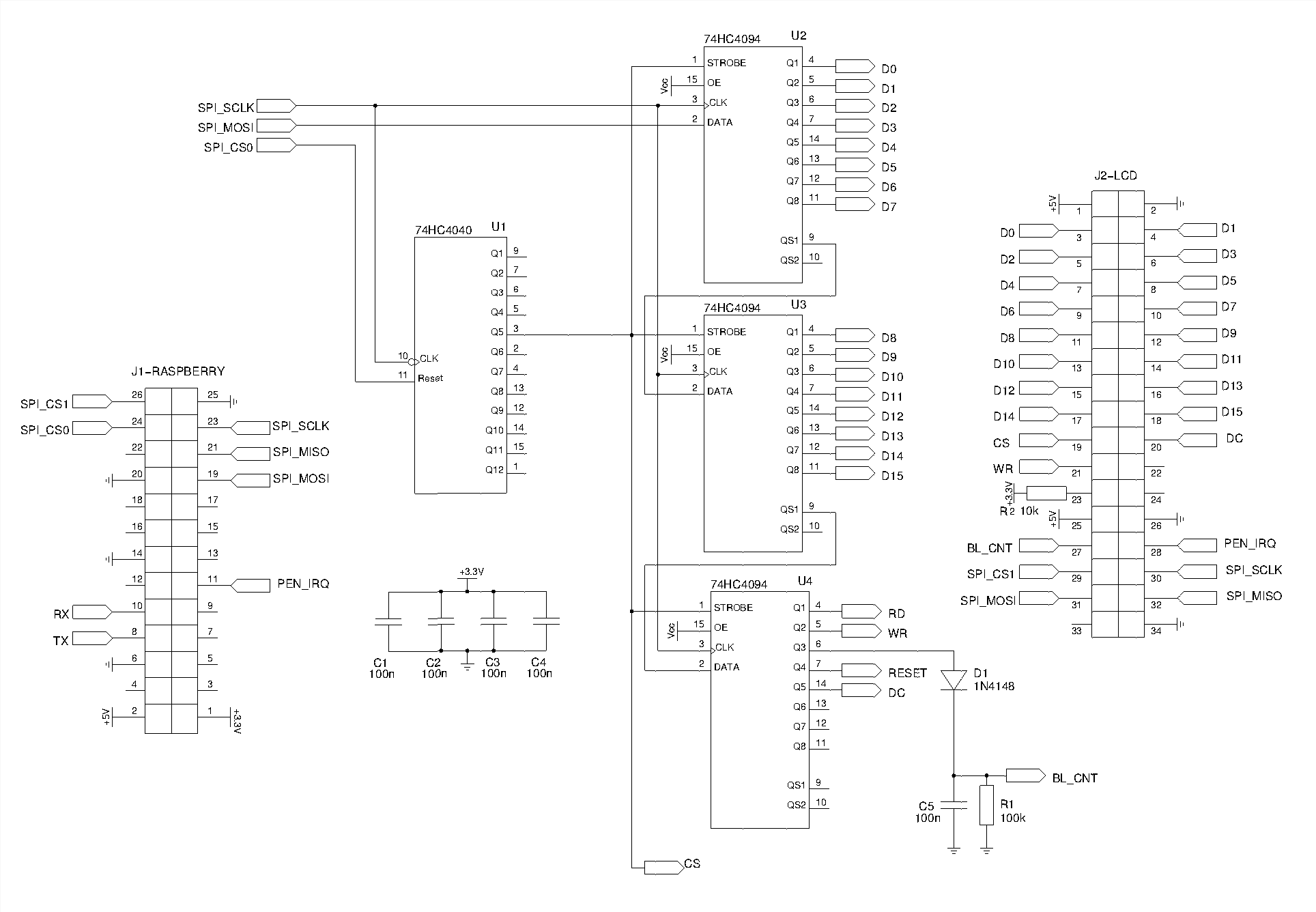