I want to make my Pi be 100% solar powered. I'm no electrician so bear with me on this.

I know solar needs to be ideally placed and doesn't account for cloudy days, but I'm looking for the ideal minimum to run a solar powered Pi. From there I can make adjustments, but a baseline minimum will help me understand things better. The Pi I plan to run will only be running my personal web server, so there is nothing else attached, save for the Ethernet cable.

lazarus78 wrote:I want to make my Pi be 100% solar powered. I'm no electrician so bear with me on this.

I know solar needs to be ideally placed and doesn't account for cloudy days, but I'm looking for the ideal minimum to run a solar powered Pi. From there I can make adjustments, but a baseline minimum will help me understand things better. The Pi I plan to run will only be running my personal web server, so there is nothing else attached, save for the Ethernet cable.

here is my guess:
12W solar panel charging a 12V battery.
the panel has sunshine 8 hours each day
on average, the power output is 1/3 of the nominal 12W, which is an optimistic guess in California were we seem to have blue sky every day.
12W/3*8h/24h=1.3W average power over 24h
it seems to me that you need at least twice as big panel to run the Pi under the assumed conditions.

regarding the size of the battery I think that you need to figure out how many cloudy days you can expect in a row and how many watt hours will have to be drawn from the battery during those cloudy days. this gives you a number for the watt hours of battery energy you need. (if you want to calculate in Ampere hours you divide those watt hours by the battery nominal voltage 12V. batteries are usually sold by the ampere hour).

then you have to consider that if you want any life time from a lead acid battery you should not remove more than 20-30% of the charge before recharging. so your battery will have to be quite large if you want to run your Pi on a solar panel continuously.

a suitable battery could be a 12V deep discharge battery. not an ordinary car battery, they will not last. you will need some kind of charge controller between the panel and the battery.

I found this graph on the web, it shows the hours of sunshine in Fresno, California each month of the year. in December you would need a 40W panel to avoid sucking your battery down, on average.
There is some information on the web on amount of sunshine (assuming no clouds) http://www1.solmetric.com/cgi/insolatio ... 0INTL%20AP
where I live, near San Jose, the annual incoming sunshine is 2066kWh/m2. assuming that the panel is fixed and mounted with 32 degree tilt and towards South. this means 235W per m2. assume panel efficiency is 14% and there is never any cloudcover or dirt on the panel, or shade, you would need about 2 square meter panel area to deliver 2.5W continuously. that would be a 300W panel? perhaps someone knows how to calculate this??
I found another map of kWh/year that appears to take cloud cover into account. it shows 1800kWh/year for my area which makes sense. http://www.solar-estimate.org/images/kwh_kwyear_map.gif
it still seems like the panel size would need to be 340W to power a tiny Pi. that seems like a large panel for a small load. where did I go wrong?
using online calculators for domestic solar panel dimensioning I come to the conclusion that a 32W panel is needed during the month of February at my location, to run the Pi - if a very large battery is used to handle cloudy days. 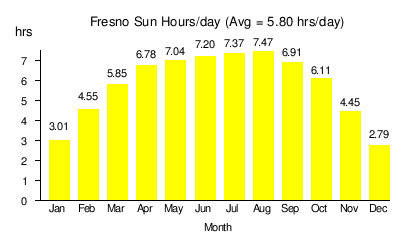 That's great calculations, but wouldn't it be easier to set up expandable system instead? Set up some solar charging system to battery that powers the Pi. Keep adding panels until the battery lasts all winter.

I agree that some trial and error is necessary. But it is always good to try to calculate the panel size and battery before investing money.
I have an interest in this myself as I am trying to set up a surveillance system for my motorhome. Ideally, the motorhome should call me if somebody tries to break in or if there is something that needs my attention. And send pictures of anyone roaming around the vehicle.
The system has to be solar powered as the motorhome is parked a couple of miles from my home. I have right now 60W panel size which is enough to keep the large batteries from discharging if I disconnect all loads. Large batteries can have a relatively large self discharge rate so it is necessary to run the generator occasionally, or to have a solar panel.

My gut feeling is that if I run the Pi as the only load and use a separate panel and battery I need at least 30W panel and about 40Ah battery. That is the minimum size for battery and it may not last more than a few years. A larger deep discharge battery would last longer.

With this power supply you should be able to go to sleep mode and the Raspberry Pi does not need to run continuously. That should save some money in the investment to the solar panel and battery. The daemon running on the Raspberry is reading the battery voltage and if the voltage is too low the system is shutdown and power supply is switched off after some time delay. The PIC processor can then wake-up the system after a set time delay. The PSU can be switched on by pressing the red button. When the system is running the same button can be used to initiate a shut down and power down after some time delay (or there seems to be still some issue with this feature).

i have a solar charger with inbuilt battery, 5v 1a, works great, but without battery your pi would probably shut down with the first cloud.

Thats all grate information Tage, but the battery I linked isnt a 12v lead acid batter, but a Li-Ion battery. I am looking at those particular kits because they are straight forward and little input. The batteru uses a micro-USB in for charging and has a 5v USB out designed for cellphone type charging needs, which is what the Pi was designed to run from, a cellphone charger.

I am looking for the easiest solar solution that I can work with as a starting point before i mess with voltage regulation whatnot. As i said, im no electrician, and i have a very limited understanding of how electricity works.

I'm also looking at powering a Raspberry Pi via Solar. The site has a 55W Solar Panel & 2x 12V 30AH Gel-Cell batteries in place (in parallel). So far it's running a PCMCIA router and an AirCam, however I do want a Pi on site.
The Router & camera run off a timer as there's no point wasting power at night time when it's too dark to see the image (landscape type view).
Have you considered what may happen to the unit over time if power is constantly cut?
(Deleted & retyped due to finding the answer but)..
Something like this may also be handy for you:
http://www.piups.net/

If you're going to be using car batteries then you're going to need to go from 12v to 5. You might want to take a look at my Pi Power board... I'm discussing it in the topic just above this one.

Check out my store! http://store.geppettoelectronics.com/
Locked
9 posts • Page 1 of 1