For v1 camera clone global external shutter work I built a 20$ 5000lm diy highspeed flash. I was able to capture (multiple) exposures with 4µs, mostly with 9µs flash durations (was good enough to capture airgun pellet inflight with 109m/s, clearly). I did a comparison to 940£ Vela One flash (1,000,000lm, but only 50Hz maximal strobe frequency instead of 20KHz with diy flash). One advantage of Vela One was that it allowed for 0.5µs flash duration:
https://github.com/Hermann-SW/Raspberry ... ed-flashes 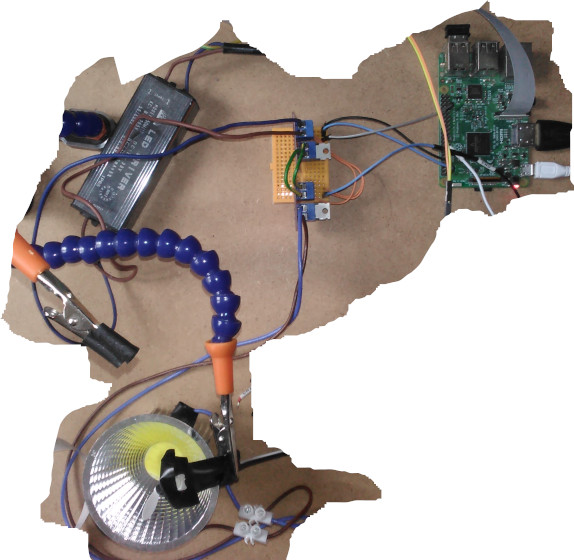 Yesterday I wanted to know how low pulse duration is still capturable with 5000lm led directed into 35mm C mount lens HQ camera. This should only be done with very short pulse durations in order to not damage HQ camera sensor.

This was how I did it: 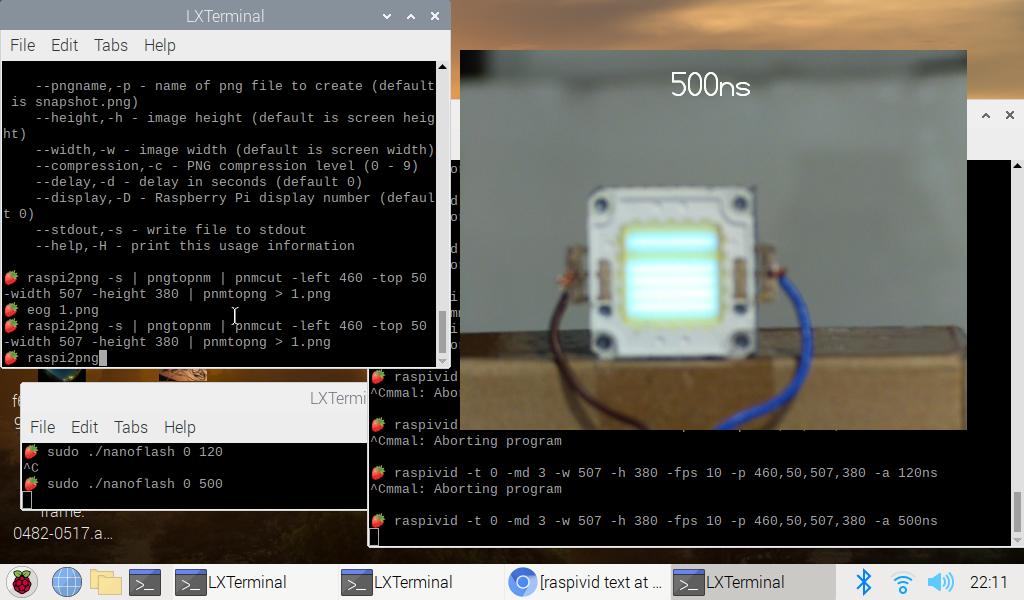 After this screenshot, I turned off light for dark room.

P.S:
Light travels 33m in 110ns, so this type of led is not good enough for very short light pulses. I tried green laser as well, and lowest visible duration was 500ns, with green laser directed into camera.
https://hermann-sw.github.io/planar_graph_playground
https://stamm-wilbrandt.de/en#raspcatbt
https://github.com/Hermann-SW/memrun
https://github.com/Hermann-SW/Raspberry_v1_camera_global_external_shutter
https://stamm-wilbrandt.de/en/Raspberry_camera.html 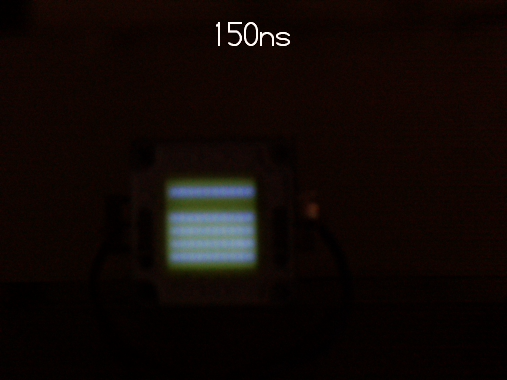 
P. S:
150ns exposure image is similar to what I see through welding helmet safety glass at home, with continuous lighting led. 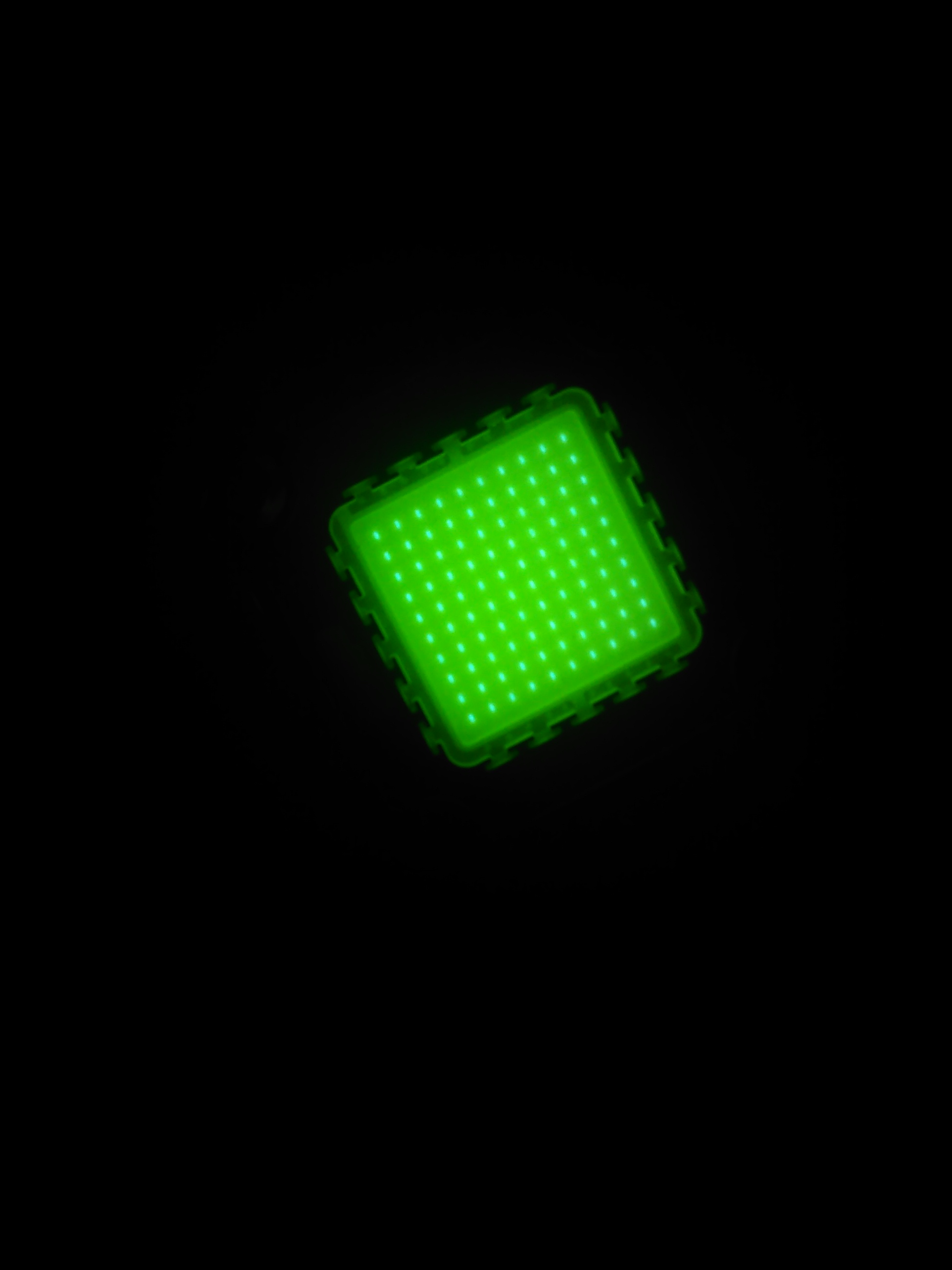 Wow, I did multiple exposure v1 camera global external shutter capturing of closing mouse trap bar, and because of calculation mistake the 9 flashes had 2µs duration and not 20µs -- and exposures are well visible.
In one terminal I executed this command:


That command captures mode7 at 90fps:


Frame 1123 from captured video contained what I was after, with logc analyzer verification of 2µs flash duration (and 1KHz frequency) -- nice, and it looks like 0.5µs flash duration would give visible image as well. Complete mouse trap closing takes 10ms only: 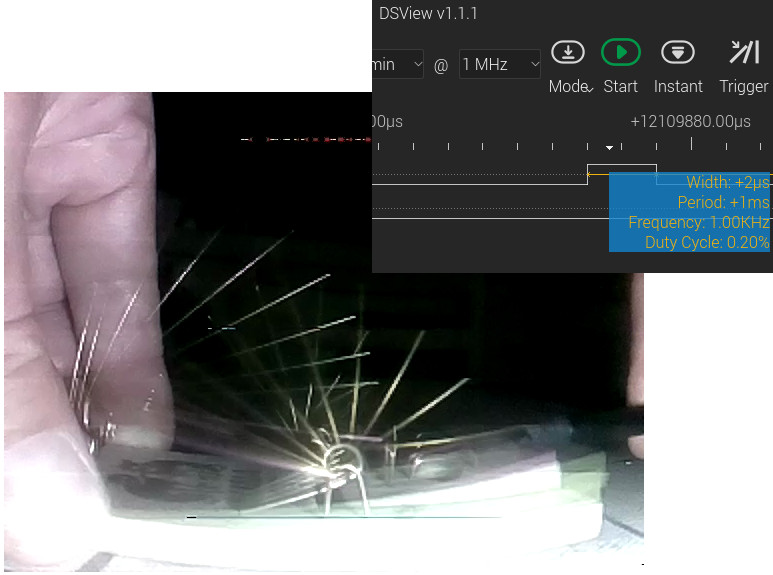 I developed my 5000lm diy highspeed flash for my v1 camera clone "global external shutter" work back in 2019:
https://github.com/Hermann-SW/Raspberry ... troduction

In the end I was able to even capture very fast rotating mini drone propeller at daylight:
https://github.com/Hermann-SW/Raspberry ... r#daylight

Two myths remained for me until today: So lets remove the myths first, I did capture 12MP photo with raspistill and HQ camera without any dark background today at daylight, corollary:

This is center part of 12MP photo captured, scaled to 50% for forum attachment: 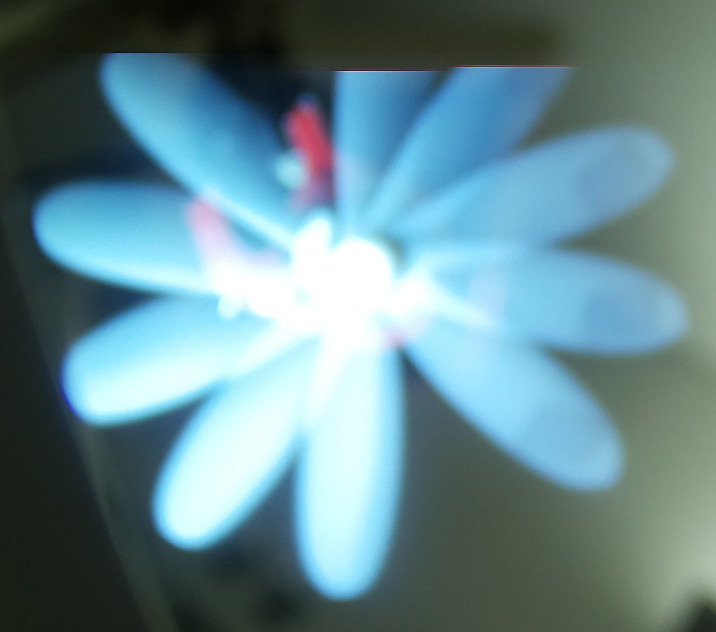 This was today's setup: 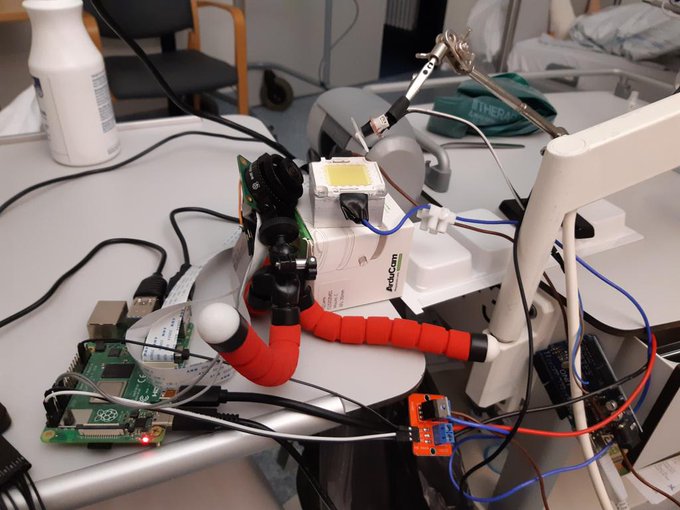 
Since HQ camera XVS is connected to GPIO17, the flashes are created in each camera frame:
viewtopic.php?f=43&t=281913 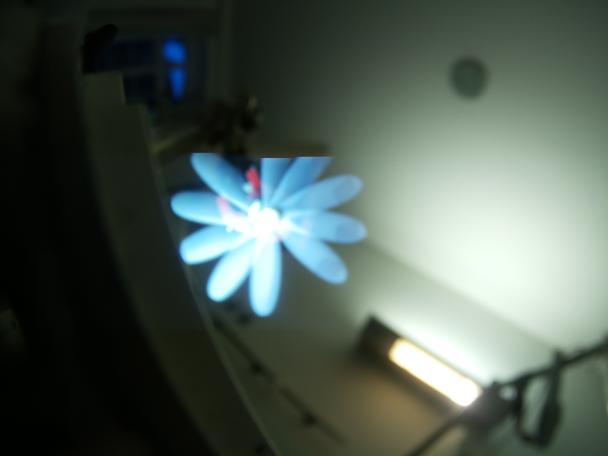 
This multi exposure also reveals rotational speed of the propeller!
The 1st and 5th exposure of propeller are 4/4000Hz=1ms apart.
And the area covered between them is roughly 1/3rd of full circle.
So one full rotation takes 3ms, and motor runs at 333rps or 20,000rpm;
Propeler diameter is 34mm, so propeller speed at blade tip is 35.6m/s or 128km/h.
Blade tip moves 19µs*35.6m/s=0.68mm during a single flash.


I am impressed of the two myths removed.
Plan for next week is that I willl be home few days before moving to rehab hospital.
I am pretty sure that I will use airgun of friend (not used for a year) for capturing >100m/s inflight pellets passing just above 5000lm led with HQ camera.

Unlike 2019 where I did capture pellet 10 times in multiple exposure photo
https://github.com/Hermann-SW/Raspberry ... nt-9000eps
with camera distant to 5000lm led, this time I will try to capture pellet inflight for very near to HQ camera lens as propeller today -- I will have to be careful to not hit the M12 lens

P.S (10/14):
I never had problems with the 38V/1.5A 5000lm flash for more than a year, until last week accidentially 38V got in contact with GPIO and killed my 4GB Pi4B. So be careful with the 38V cables. More:
viewtopic.php?f=29&p=1741647#p1741644
https://hermann-sw.github.io/planar_graph_playground
https://stamm-wilbrandt.de/en#raspcatbt
https://github.com/Hermann-SW/memrun
https://github.com/Hermann-SW/Raspberry_v1_camera_global_external_shutter
https://stamm-wilbrandt.de/en/Raspberry_camera.html But the 1012x760 frame shows that using a single 5000lm flash lights the bullet from one side only.
I searched for all 5000lm and 10000lm leds I had.
And it turned out that the three 5000lm leds I have are all broken, with at least 1 of the 5 rows with 10 led dots each not working.
This includes the led used to capture above frame, with 4 rows working it was a 4000lm flash only.

Luckily I have five(!) fully woking 10000lm leds.
In the past I preferred using the 5000lm leds, because they could be used with 40x40x20mm passive heatsinks for longer time.
The 10000lm leds did need big active heatsinks, without they become disfunctional within few seconds.
This is one of two I tried:
https://www.aliexpress.com/item/32808714316.html 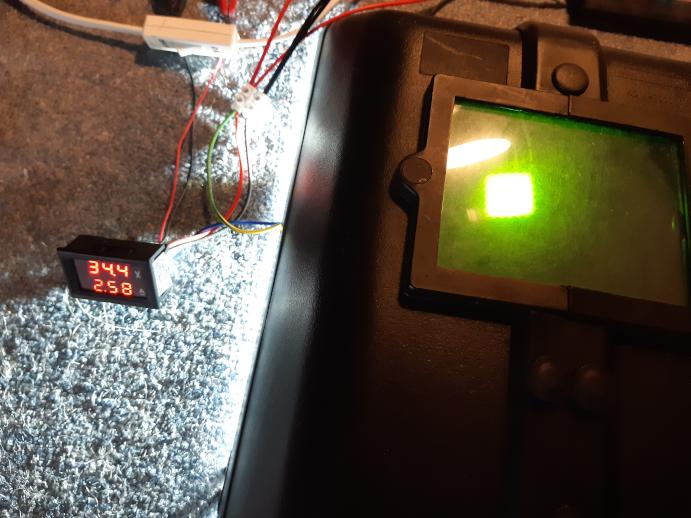 
Next I took a photo focussing on two 10000lm leds both connected, powered with single 50W led driver only.
Even that is very bright, so I took the photo through welding helmet safety glass.
As can be seen the 10x10 led dots in each 10000lm led work fine: 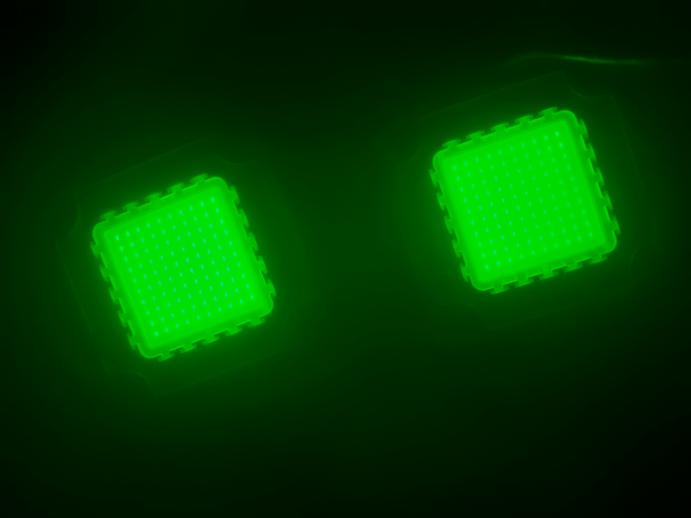 
Because of the difference in amperage of both pairs I decided to power both 10000lm leds from parallel four led drivers I have.
I measured 35.8V/5.44A which is 194.8W, pretty close to 200W needed:
(after powering on all four driver switches leds became hot, and the 35.8V reduced to 34.9V already) 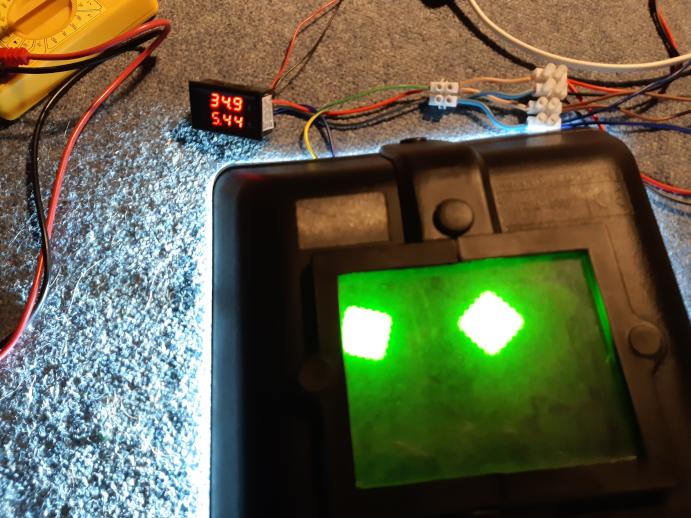 
I did the captures of airgun bullet inflight with led lighted for 4 seconds, but the led was "on" with 8.33µs long flashes at 9KHz, that is only 75ms per second. Should not be a heat problem with the two 10000lm leds.

For controlling the 5000lm led up to now I used 100V IRF520 mosfet -- luckily that can deal with 9A, more than enough for letting Pi control the two 10000lm leds.
https://hermann-sw.github.io/planar_graph_playground
https://stamm-wilbrandt.de/en#raspcatbt
https://github.com/Hermann-SW/memrun
https://github.com/Hermann-SW/Raspberry_v1_camera_global_external_shutter
https://stamm-wilbrandt.de/en/Raspberry_camera.html

Last night I did power a single 10000lm led with two led drivers (100W in total) and wanted to see how low 10000lm led would be visible. To my surprise there was a hard lower bound of 500ns, below that nothing could be seen, neither for camera nor for my eye. Reason seems to be, that below 500ns time is too short to build >2A for the two led drivers.

Today at daylight I did another capture showing what I captured at 500ns exposure time with the same method described in detail in previous posting. 12MP photo:
https://stamm-wilbrandt.de/en/forum/10Klm.500ns.day.jpg
Scaled to 15%: 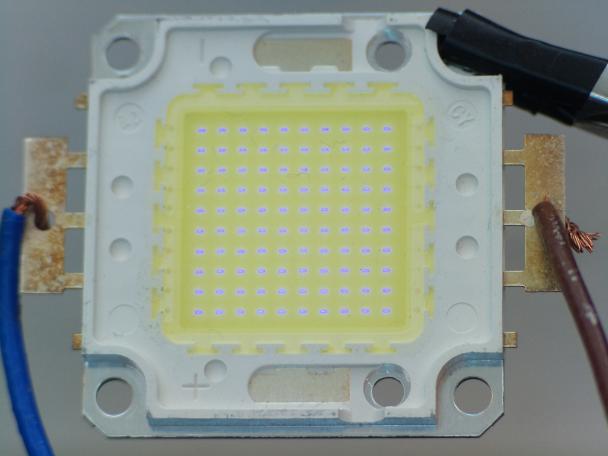 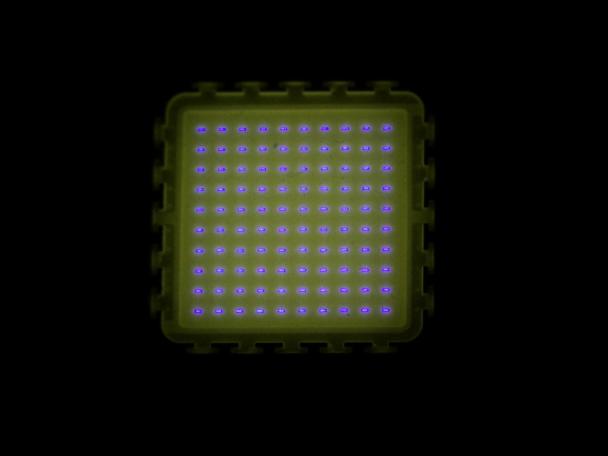 
A 1:1 copy out of top left corner shows interesting details about 15 of the 100 led dots: 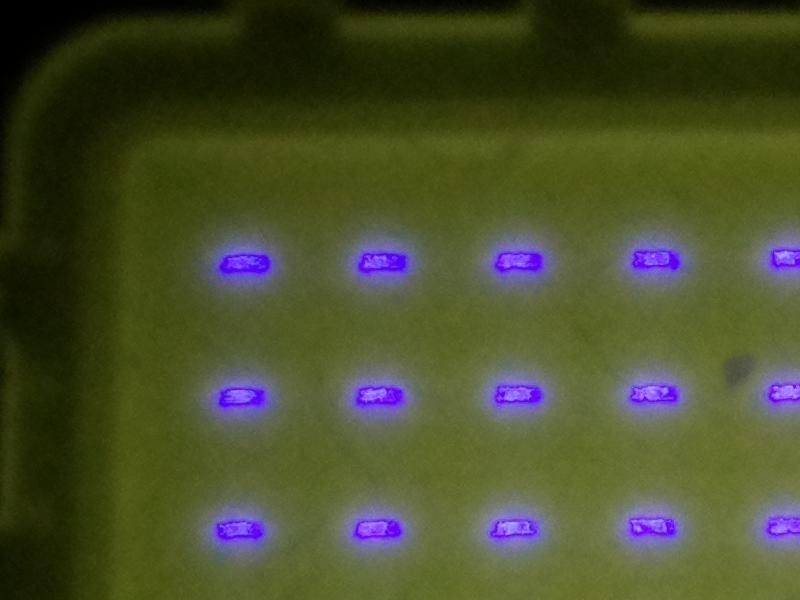