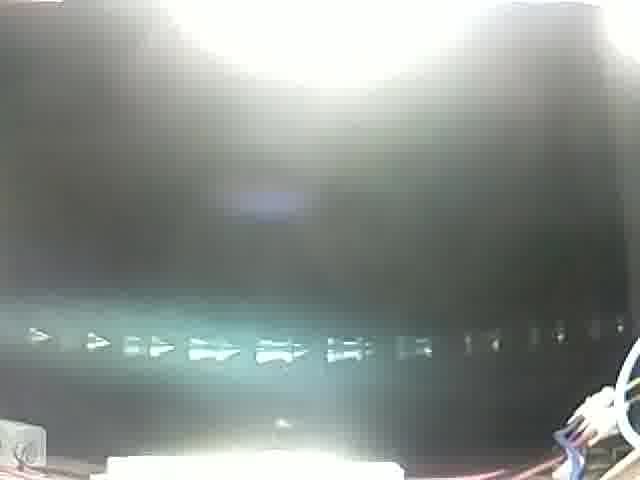 Today I started to capture airgun bullet inflight with the same method -- obviously global shutter is not needed for short duration flashes capturing fast motion. At the wall is a small cardboard box, filled densly with lots of folded newspapers as bullet catcher. I did shoot several times into it and no bullet has left the catcher on the other side. Just before is HQ camera lying flat and looking up with CStoM12 adapter, a CStoC adapter and M12 20° lense. On the right side is 5000lm led, its 38V/1.5A controlled via Mosfet from Pi4B GPIO13 connected to Mosfet module SIG pin. 9" HDMI display allows to see stuff and control everything when using the airgun. I am shooting above the M12 lense, into the bullet catcher. The depth of view is only a few millimeters, so I placed a small piece of paper with 5 digits (used in this previous posting before) above the lense in distance (hold by soldering 3rd hand), that just below it capture is sharp. That way I can just shoot below the paper to capture bullet sharply: 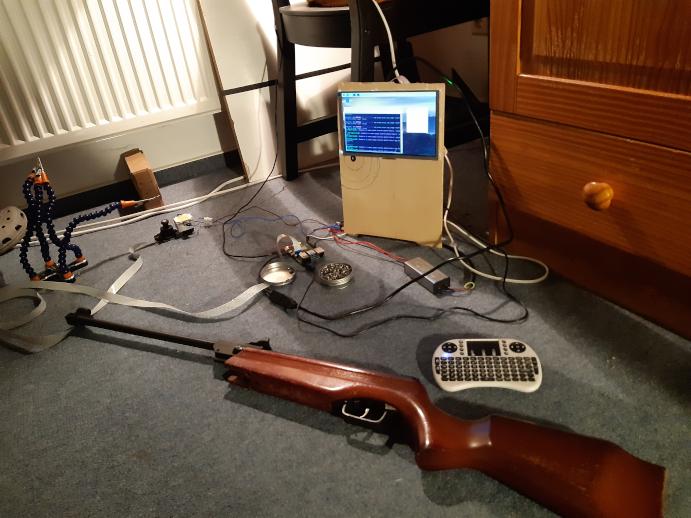 
The camera is having its top directed to the 5000lm led. Therefore the small paper is displayed vertically. If capturing bullet, it will enter from right and leave on the left. The 20° FoV is too small for me to hit with the airgun -- I will change to 50° tomorrow morning. This is 5fps animation created from 80fps video captured. It shows that the bullet missed camera view, but that the passing bullet created air draft that did hit the white paper. It also shows that there seems to be some electrical problem in the setup (partial frames with wrong colors), maybe the 38V/1.5A DC led is too close to HQ camera:

This is the script I use currently:

It starts raspivid in background capturing mode 4 video at 80fps framerate.
After 2 seconds of delay, pwm_ges tool generates 9KHz PWM signal on GPIO13 with 1/9000*75000=8.33µs duration of pulses, for the time passed to doit80.
Finally script waits until raspivid has ended.

raspivid overcomes the issue not knowing when bullet flies -- using a sound trigger is another option.

When capturing with v1 camera high PWM frequency was a problem (9KHz/90fps=100 flashes per frame, too bright photo).
With HQ camera this is unlikely to be a problem because of capturing at daylight and lux quadratically decreases with distance.

I did rearrange the cabling a bit, made sure that flex ribbon cable is not anywhere near to AC or 38V DC cables, and mostly the electrical problems were gone. Then on first shot captured with "$ doit80 4" not all is fine. Instead of 20° M12 lense today I used 50° M12 lense to make sure that bullet passes camera FoV. 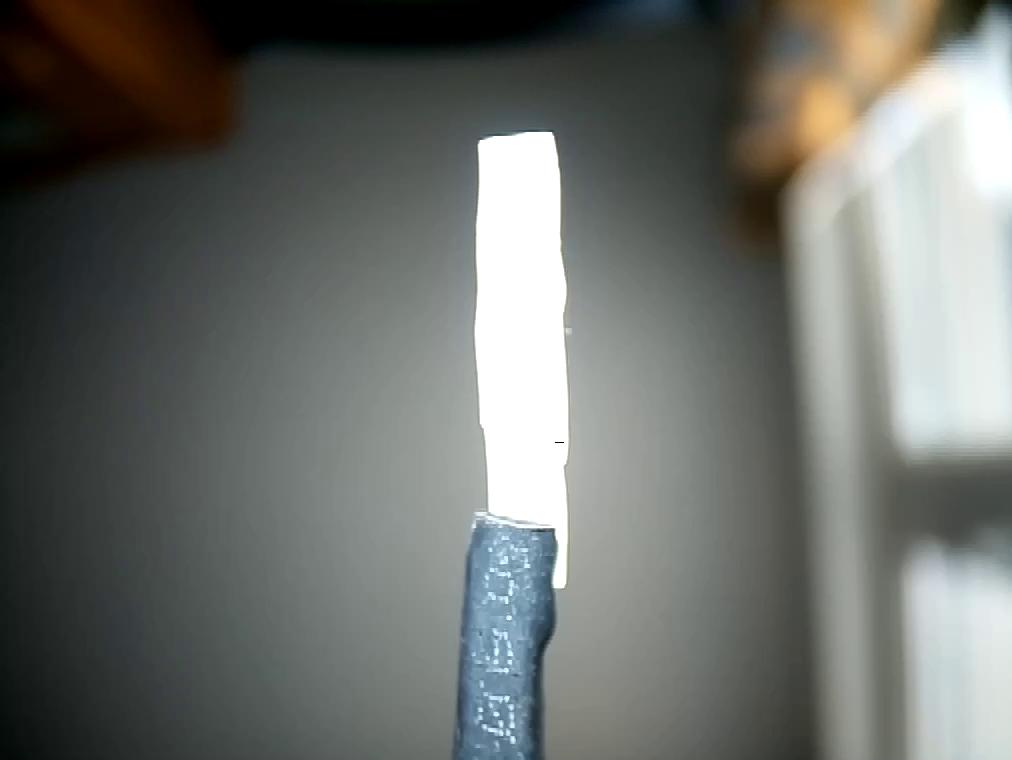 This is the frame after bullet has passed FoV, paper is moving heavily du to bullet air draft: 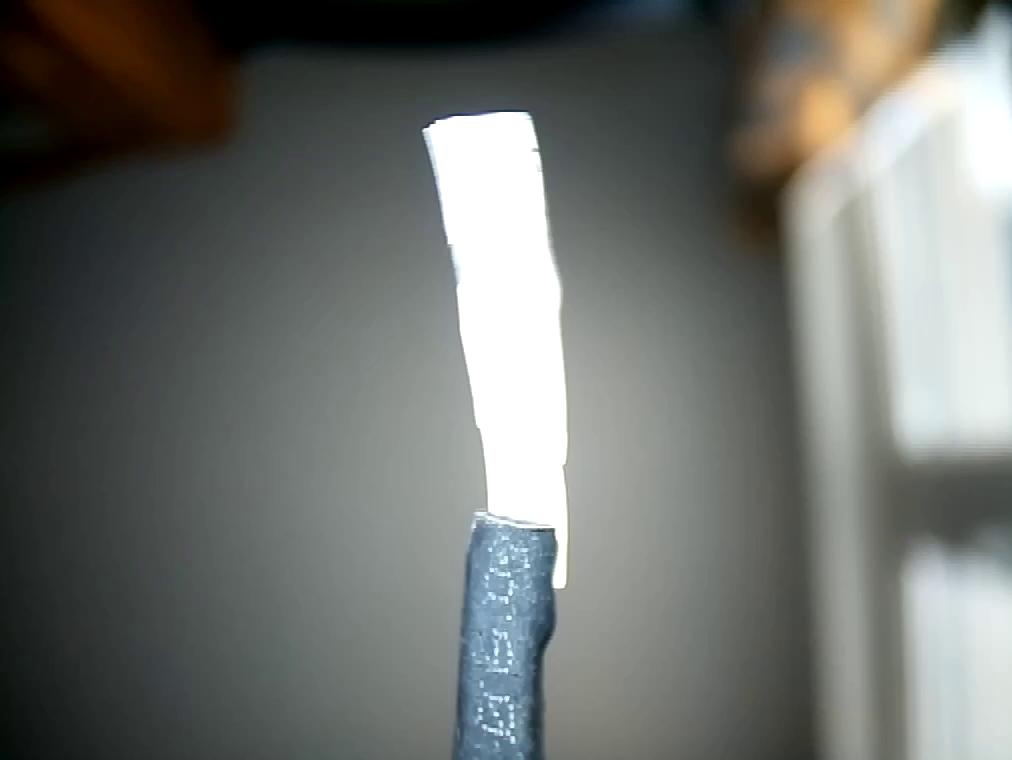 And this is first frame with multiple exposure of bullet captured with HQ camera: 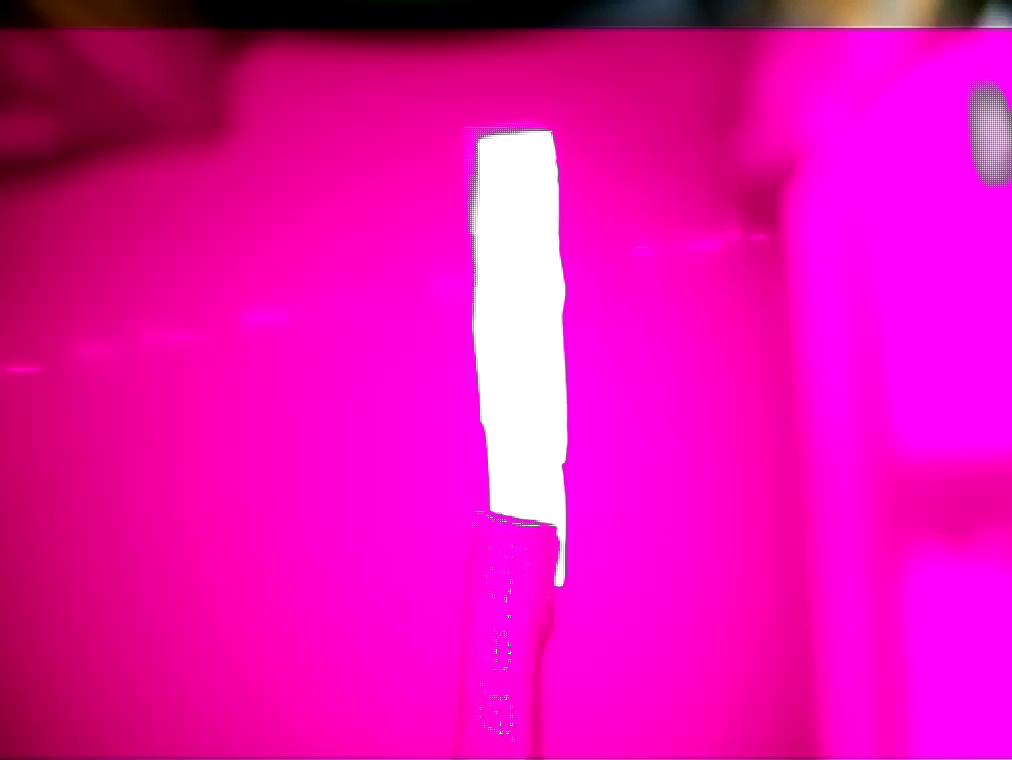 I brought the 5000lm led much closer to the paper (and more away from HQ camera): 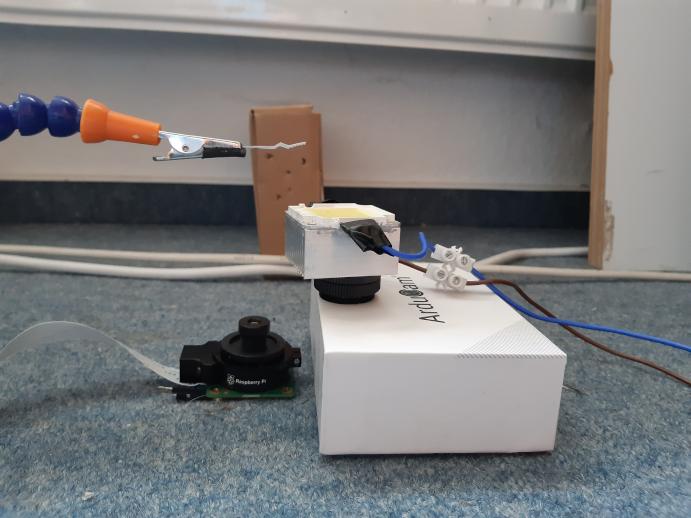 And got first real multiple exposure capture of inflight bullet with HQ camera: 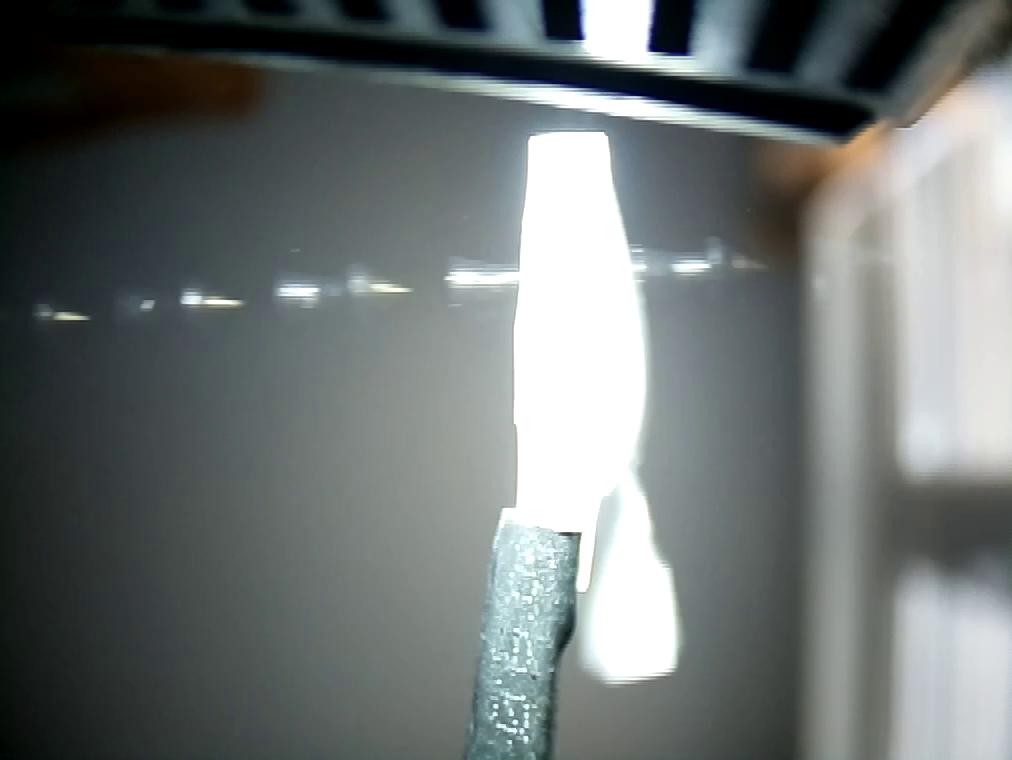 This is the airgun pointed bullet shot, 8mm long: 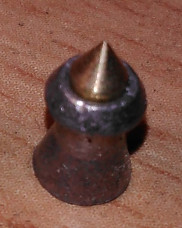 You are right, while the frame I showed was fine, many of the other frames captured have wrong colors.
So I will replace long flex ribbon cable with original 20cm HQ camera cable.

For speed determination I measured length of bullet as well as distance between bullet fronts: 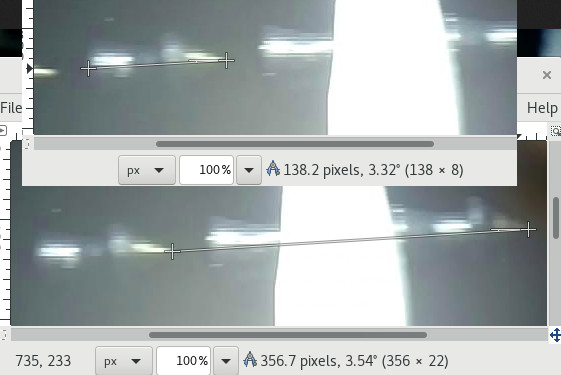 You are right, while the frame I showed was fine, many of the other frames captured have wrong colors.
So I will replace long flex ribbon cable with original 20cm HQ camera cable. 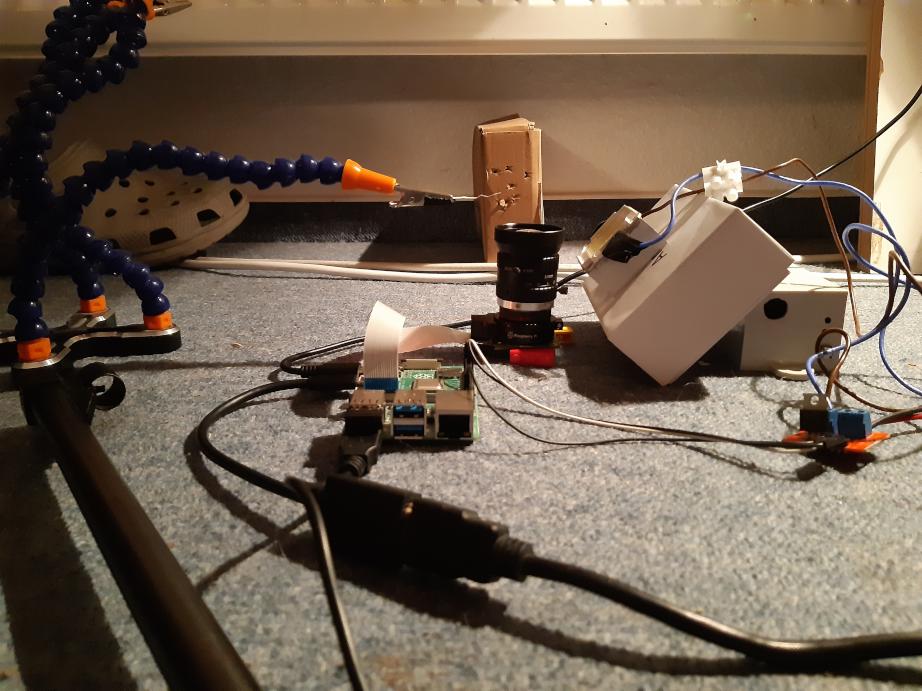 I wanted to go below 15cm distance, and so I screwed out the whole lens a bit from CStoC adapter ring, increasing backfocal length. That allowed me to get 1cm sharp view just below the white paper only 2cm above foremost lens. Not sure whether that is expected, but I did some bullet shots with that setup. Finally I moved the white paper just outside camera view, so that it did not reflect so much light into the camera. This is the 1012x760 frame captured: 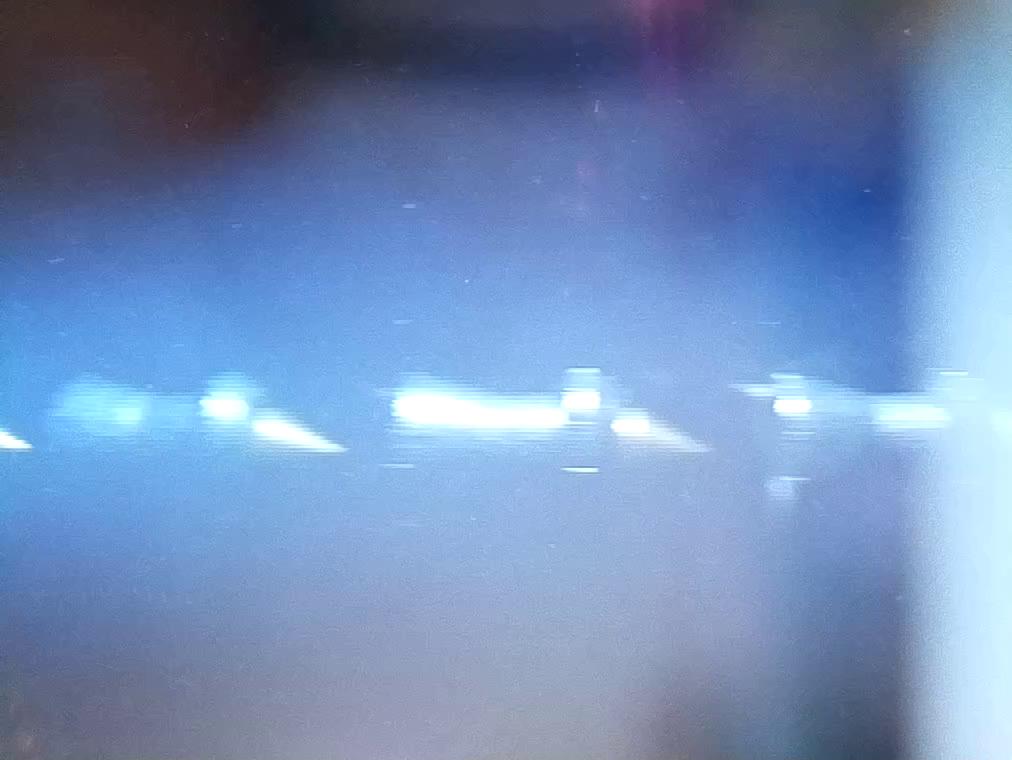 The last frame was captured with window shutter closed and few light besides the 9KHz flashes.

Today I did capture at daylight, although evrything further away is out of focus, daylight seems to have a positive effect on the frames captured. Here I nearly missed camera FoV: 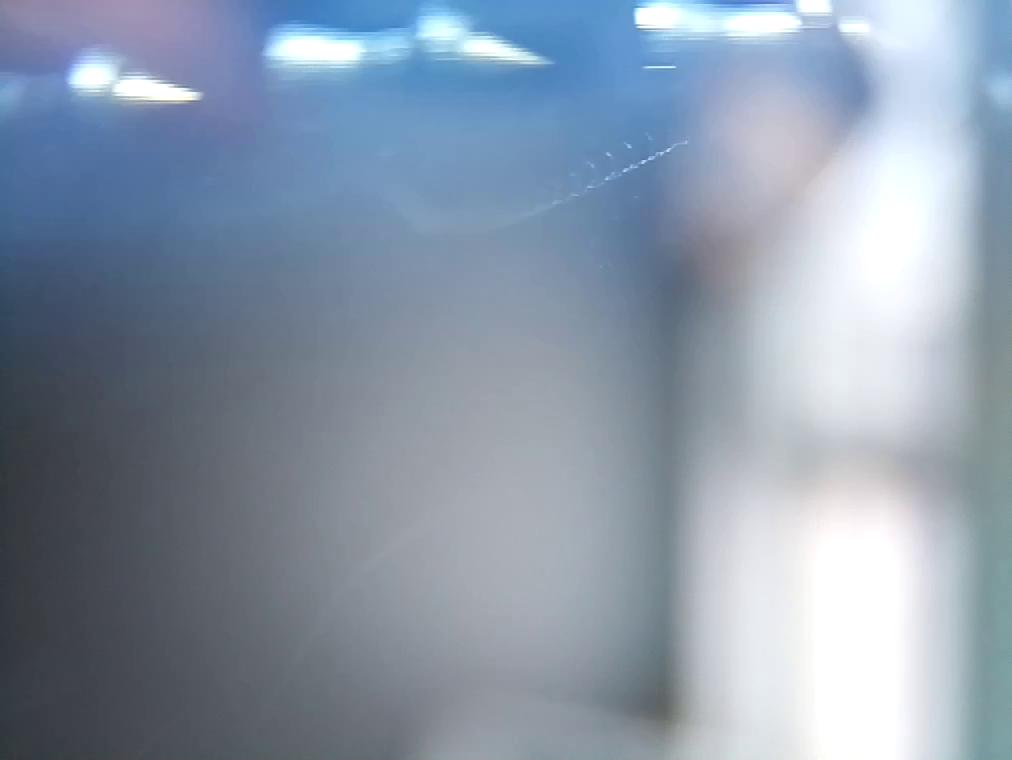 
Next I tested Fov and which distance to lens is captured clearly. It turned out that shooting just above the middle of the lens is what is needed. In addition the clearly exposed area is just above the lens up to 1cm height. So I completely moved away soldering 3rd hand with paper since now I know where and at which height to shoot above the lens. Just need to be careful to not shoot the lens by accident: 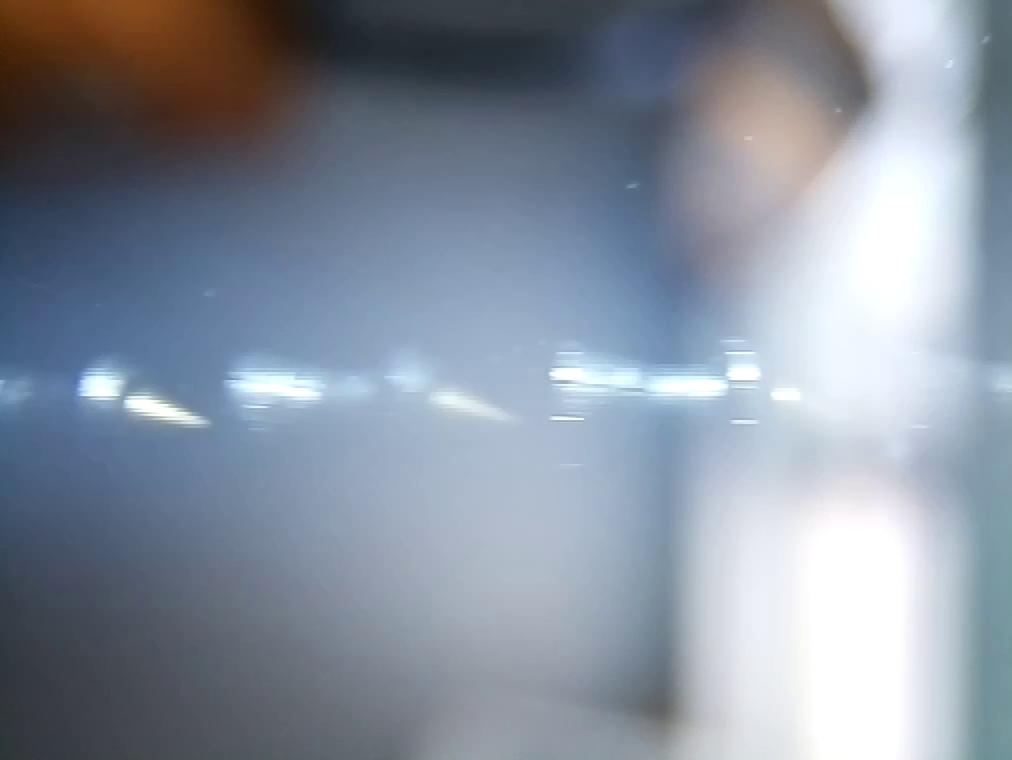 
The procedure is always same, run raspivid with mode4 and "-t 0" for preview. If all is fine, stop, do a test run ("doit80 4"), then bring airgun into correct position for shoot, start doit80 again and shoot when led lights up.
Next use "ptsanalyze tst.pts" to confirm that video was captured at 80fps without frameskips.
Then do "ffmpeg -i tst.h264 frame.%04d.png".
Finally do "eog.???.png" and use cursor right key to step through the frames quickly until having noticed frame with bullet, then use cursor left key to go back to the frame with bullet.
Very seldom bullet capture might be split onto two frames, this only happend to me once for >10 shots. Today I did setup airgun bullet capture environment with the two 20000lm leds.
I placed HQ camera on a small construction of Lego pieces for vertical direction capturing.
The 4 parallel 50W led drivers with 100V/10A voltmeter/amperemeter are connected to 100V/9A IFR520 mosfet module.
I use the small paper with some text for lense adjustment -- now 1cm just above 5mm C-mount lense foremost lense has sharp focus:
https://stamm-wilbrandt.de/en/forum/20201024_121855.jpg 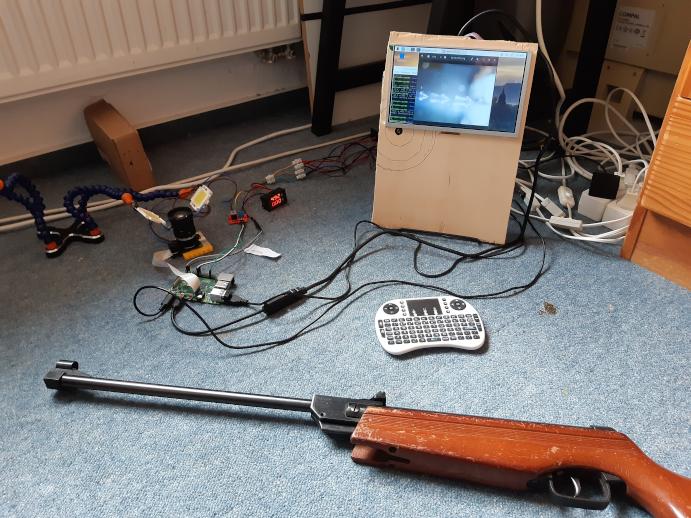 
First shot was done with lense out of focus.
Second shot showed that there was dirt on the lense -- I cleaned the lense then.
3rd shot looks quite nice, lighted from two sides with 10000lm (8.33µs duration) flashes per exposure:
[with 9KHz 8.33µs duration flashes, leds are "on" for 75ms of a 1 second only, amperemeter shows 0.41A only (48.6V)]: 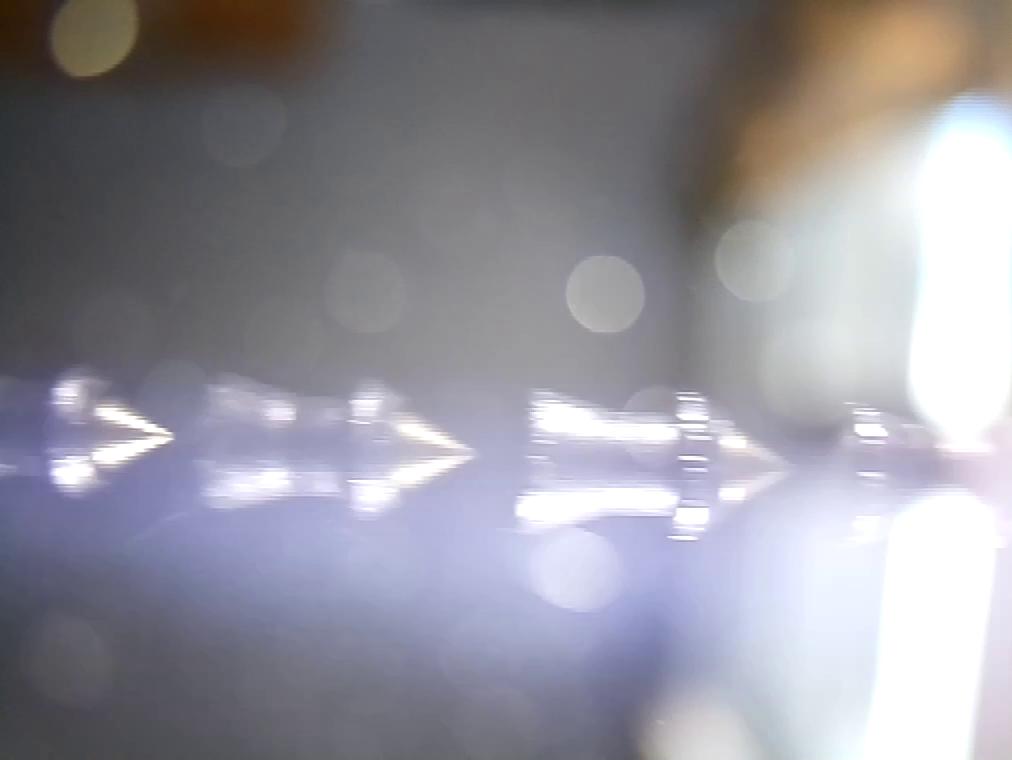 So I played with mode2 and raspividyuv.
Result file gets huge quickly, so I stored under /dev/shm.
Because I run on 2GB Pi4B currently, that size is limited, and allows for 20fps only.
But I did 6 shots an never capture bullet, there is too much time between frames compared to mode4 80fps capturing.

I learned that conversion from yuv420p to .png is not lossles, used this ffmpeg command to convert recorded tst.yuv to frames:


This is the 2048x1520 frame (next multiple of 32 after 2028) after bullet passed camera FoV, where you can see trajectories of some dust particles, pushed by bullet air draft: 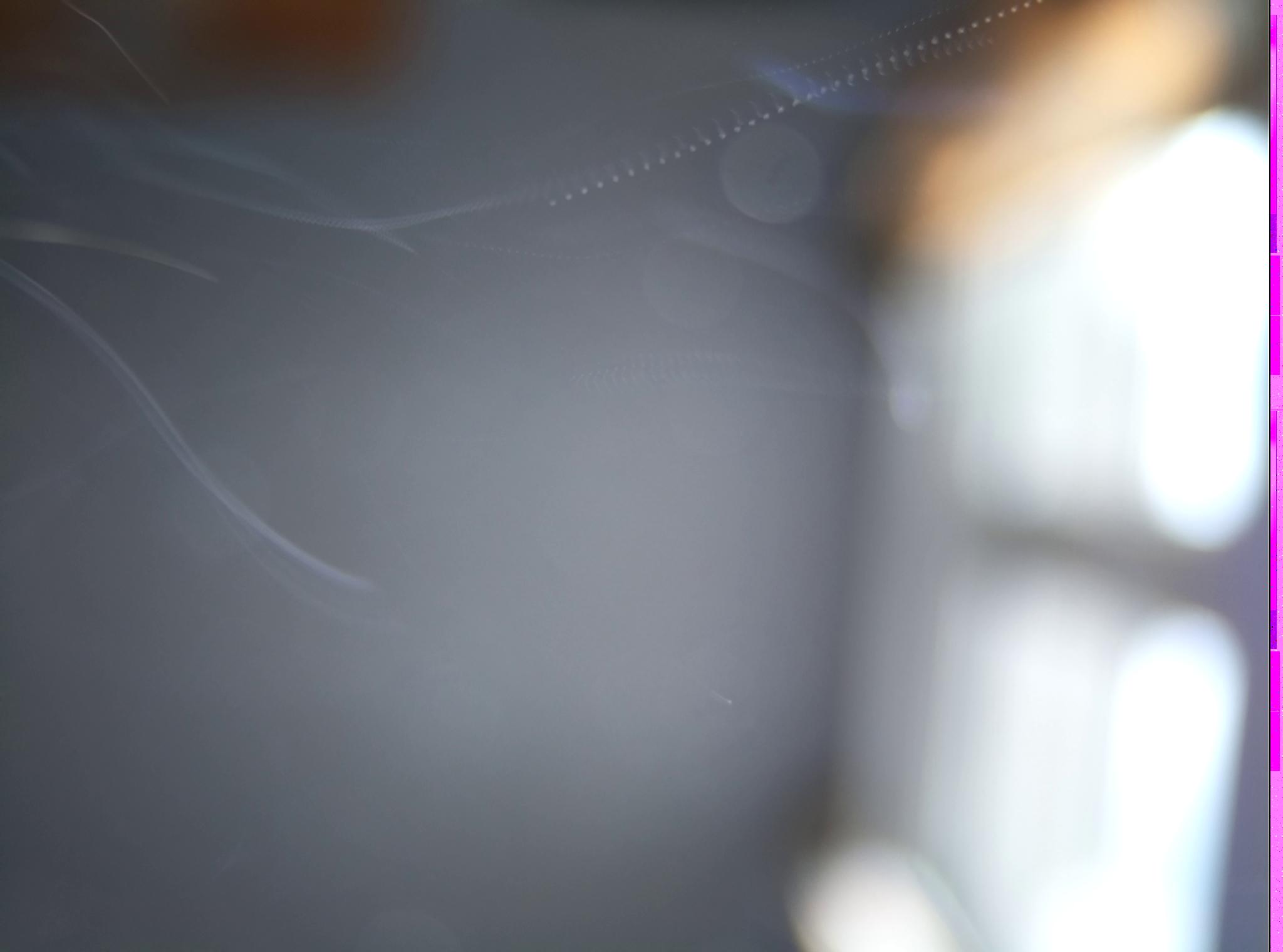 frame.0137.png.jpg with the new lighting is amazing!!!
Simply awesome stuff.

I am about to switch some cameras to HDMI cables for distance runs and to keep my fat fingers from breaking CSI connectors. Not sure if you have used those in your images. I got mine from Arducam & they have a small headphone jack I was thinking of using to send the sync signal for sync'ing future HQ cameras as I only have 1 right now.
Rich Shumaker
http://www.instructables.com/id/Pi-Zero-W-NoIR-8MP-Camera-Build-Overview-Introduct/
Locked
9 posts • Page 1 of 1