How to setup Full Minecraft 1.14.4 (with Optifine) on Raspberry or Pi4 (using Gentoo 64bit)

Please note :
Do this at your own risk.
If you have any doubts use a spare SD card.
Pi4: I'm using the official 5.1V 3.0A power supply, with the Pi4 in an open sided case with small fan.

1 Download and run setupMC1_14_4 script
This will take a few minutes, including installing Oracle java 8.

Login with Minecraft email and password
Click 'edit profile' and select use release - 'release 1.14.4', then 'save profile'
Click Play to install game
You will then receive an error
Close launcher

Select the OptiFine profile and click play. The launcher will crash.

Change options in Minecraft to reduce render chunks to 3.

Sorry, I left a link in to my last run script.

Worked great for me.

The issues I had were being impatient or not reading the guide fully. My first attempt was in Raspbian when it clearly states Gentoo Linux. The other issues I had was closing terminal too soon after the Minecraft launcher crashes or quits out. If you wait 1-3 minutes terminal becomes useable again after the launcher crashes. You need to wait for terminal to finish what it’s doing.

I made a video

sorry I hadn't read that it only worked for gentoo64.
but now I tried to install it on gentoo and I have a different problem:

ok i found the problem, i write how i solved it in case it happened to someone else.
when I installed gentoo64, I created a new user and I deleted the demouser, but in the "runMC1_14_4_OptifineF3.sh" file the demouser is used in the various paths. so to solve the problem simply change all the demousers with the personal username with mousepad 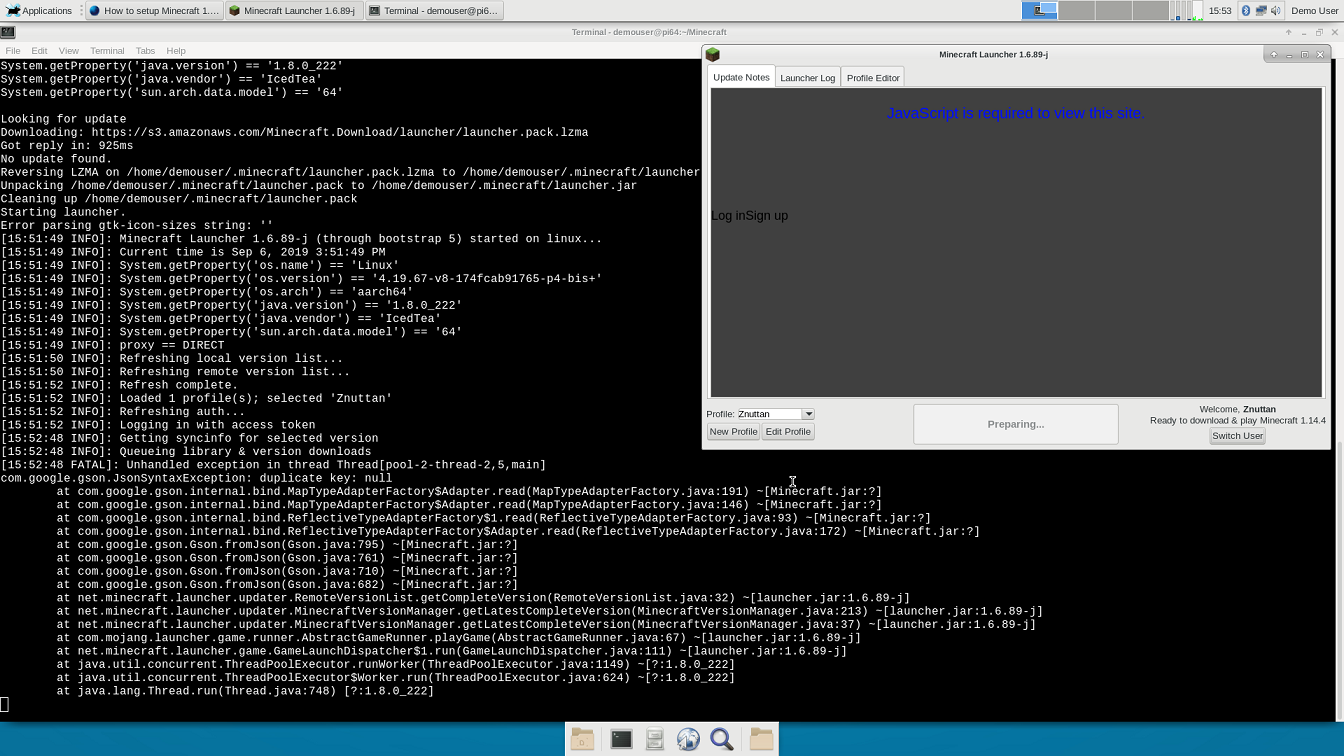 Grateful if anyone can tell me what's wrong?

Apparently something regressed in the launcher metadata manifest 48 hours ago: https://www.minecraftforum.net/forums/s ... -preparing

Users have reported the problem with multiple launchers on multiple operating systems. Supposedly the error happens when launching 1.14.4 but not 1.14.3 and earlier.

This is the kind of problem to hope gets fixed on the server end soon. If not, would need to modify the old launchers or spoof the JSON metadata so that it doesn't contain these null values.

Would it be possible to download an older version of the launcher to install Minecraft and avoid the "Preparing" bug?

I tried this today and ran into the duplicate null error. Looks like they don't plan on fixing this on the backend after all, thereby breaking all unofficial launchers.

bullen suggested using the new launcher at http://move.rupy.se/file/launcher.jar and that was sufficient to get everything running. I was in a Debian arm64 chroot on Raspbian but I expect this to be the same for Gentoo. Just download this newer launcher and change the two Minecraft.jar references to launcher.jar

Reminder: anyone not on Gentoo or is using a different username, in runMC1_14_4_OptifineF3.sh change all instances of /home/demouser to $HOME

jdonald wrote: ↑
Mon Sep 16, 2019 3:00 am
I tried this today and ran into the duplicate null error. Looks like they don't plan on fixing this on the backend after all, thereby breaking all unofficial launchers.

bullen suggested using the new launcher at http://move.rupy.se/file/launcher.jar and that was sufficient to get everything running. I was in a Debian arm64 chroot on Raspbian but I expect this to be the same for Gentoo. Just download this newer launcher and change the two Minecraft.jar references to launcher.jar

Reminder: anyone not on Gentoo or is using a different username, in runMC1_14_4_OptifineF3.sh change all instances of /home/demouser to $HOME

Hi,
Is there anyone who can write a clear guide for beginners like me? Very grateful for your time.

Hey mike ! I followed all the instructions but when I downloaded minecraft and open it I log in. But when I click play to download the files it stuck on preparing I’ve tried everything even resetting the SD card.

Try using http://move.rupy.se/file/launcher.jar. Download it and rename it to Minecraft.jar. Then go to the /home/*username*/Minecraft folder, delete Minecraft.jar, and replace it with the new one. It should work!

I started off with increasing GPU memory from defaul 64 to 256MB in settings, and rebooted.
I then think I ran step 1 and 2 in this tutorial.
I then did this either after step 2 or in step 4: As said in the other post, I then had to download the old launcher from from http://move.rupy.se/file/launcher.jar and I then ran java -jar launcher.jar instead of java -jar Minecraft.jar
I installed Optifine like in step 3
In step 4, remember to use launcher.jar instead of Minecraft.jar
In step 5, use nano or emacs instead of mousepad if you don't have it (It wasn't included by default in my raspberrian)
As the other post said, you must here also do a search and replace to replace all occurences of "/home/demouser" with "$HOME"
In step 6, you will now probably get a java Exec format error. That seems to be because the installer installed a gentoo 64-bit version of java instead of a 32-bit version for raspberrian. I fixed it by doing the following:
sudo apt install openjdk-8-jdk openjdk-8-jre
The correct java then seemed to be installed on /usr/lib/jvm/java-8-openjdk-armhf/bin/java
Now, you must open runMC1_14_4_OptifineF3.sh in your favourite editor again.
Enter /usr/lib/jvm/java-8-openjdk-armhf/bin/java just before the old java path before "-Xmx2G"
So that's it then. NOOO you said?? No you get an error message complaining about "Failed to locate library: liblwjgl.so"?
After a lot of googling, it seems that the arm64-version of liblwjgl3 that was downloaded is not compatible with 32-bit raspberrian. Finally I fount out from viewtopic.php?t=218742 that I could download compatible files from https://www.dropbox.com/s/y6gaickl7daob ... ar.xz?dl=0
Download these files, and place them in a new directory /home/pi/lwjgl3arm32/
Then, again open runMC1_14_4_OptifineF3.sh yet again. This time, you must do a search and replace, replacing all occurences of $HOME/lwjgl3arm64/ with $HOME/lwjgl3arm32/
So now finally the game is up and running. Wait, it is not?
Oh, the lwjgl-files we downloaded seems to just include the system-specific so-files, and not the jar-files. We can then just do the following:
cp $HOME/lwjgl3arm64/*.jar $HOME/lwjgl3arm32/
And finally, the game actually starts up, and is even playable (I reduced render chunks etc in options)
Hopefully you got this far too

I tried your method but could not get it to work... kept getting an error that it couldn't find the launcher...

There is now a 64-bit version of Rasbian (aarch64). would this work also instead of Gentoo 64-bit?

thank you for your wonderful work. Could you please update the launcer to the actual version in your installation packet?

How do you do the run the

Ok, so I just installed Gentoo 64bit and tried to to step one but this is what is showed:

What does this mean and how do I fix it?

What does this mean

Will there be an updated version of this for later versions of Minecraft (eg 1.15)?