Last night saw the 3rd Oxford Raspberry Jam meetup, and I was able to demonstrate my Pi running Windows 95. 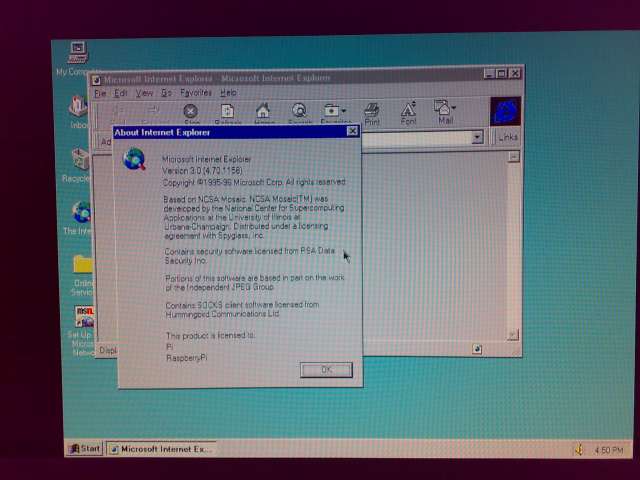 This was at the same time a joke and a serious demonstration of the Pi's capability. My apologies to the mods if this is not entirely on-topic for this particular forum, I ran Windows 95 in a Bochs virtual x86 machine over Debian rather than as a Pi operating system in its own right.

It was just about usable, despite no effort having gone in to tuning the Bochs setup. I can think of no practical application for Windows 95 on a Pi, but it is not impossible that perhaps someone might have to run a piece of legacy DOS software somewhere and might find Bochs a useful means to do it.

Anyway, a few tech details. Bochs is in the Debian repository, so a simple apt-get installed it. I installed Windows 95 from the CD that came with a laptop in the '90s to a 100Mb Bochs hard disk image on my desktop PC and transferred it to the Pi on a USB disk. The Pi has no CD-ROM drive and I didn't fancy trying to extract the ISO file to do the task. I used the X-windows Bochs display library, so the Debian desktop was always present in the background of the Windows 95 session. A much faster result could probably have been achieved had I compiled the SVGAlib package and run it without X, but this was more a demonstration for the laughs than practicality. As I said, "You've seen an open OS on your Pi, now here's a wide-open one!".
I make and sell radio kits for the Raspberry Pi and more.
http://shop.languagespy.com/

Awesome! I think you should still try compiling it for the people who don't get Linux but do get older computers with windows. I would love it and it would be better for my grandparents.

A tempting idea, but this is something of a curiosity and a joke, and will always remain so.

Firstly, you need to own a Windows 95 licence to do it. This is not a redistributable piece of software.

Secondly, it's in a 1990s PC emulated on a Pi. That means it's never going to be quick in any sense of the word.

And thirdly, Windows 95 is now not far off twenty years old. Would you buy your relatives a 486DX2-66 with 16Mb of memory now, in 2012? Of course not. So you probably wouldn't give them the OS it came with. It's slow, buggy, insecure and incapable of running many things we now take for granted. USB? Forget it, Windows 95 barely supports it.

If you have a relative who would benefit from a Pi but is used to the Windows interface then I would suggest finding a Windows-like skin for the Linux desktop, the result will be far more useful.
I make and sell radio kits for the Raspberry Pi and more.
http://shop.languagespy.com/

You should try again with QEMU.
Its supposed to be faster. (Look at Dietmars efforts)

ghans
• Don't like the board ? Missing features ? Change to the prosilver theme ! You can find it in your settings.
• Don't like to search the forum BEFORE posting 'cos it's useless ? Try googling : yoursearchtermshere site:raspberrypi.org

Very likely, but how desperate am I to have a working Windows 95 desktop, really?

I make and sell radio kits for the Raspberry Pi and more.
http://shop.languagespy.com/

Who needs Windows 8 or Windows 95 when you can have NT4.

"Very likely, but how desperate am I to have a working Windows 95 desktop, really?" - if you're a freecell addict then it's quite possible.

Sir, I salute you!

I did a lot of work with NT 4 back in the day and it was a far superior OS to Win95 on similar hardware, but I'm sure there has to be an easier way to get Freecell on a Pi. (Googles... ) How about this in TCL? http://www.talvo.com/tcl-code.php
I make and sell radio kits for the Raspberry Pi and more.
http://shop.languagespy.com/

The rpi project is intend to kids learn to use and start programming on computers.

How is that possible using a MS OS?

The PI isn't just an educational tool for kids it's also a cheap 1337 machine for adults, hackers and coders alike.
Many people have turned their PI into cheap media centres which couldn't be any more than educational, but who cares the PI is what you make it (the PI can, therefore I will).

However I have always been fascinated by emulators and it's especially interesting seeing Microsoft Windows running on an ARM based machine when it's executing Intel code.
Running Windows on the PI can have it's uses too i.e. old software, or software that isn’t available on the Linux ARM platform.

But most of that software is actually useless!
Amor de Slackware
Portugal 2007

I suggest you re-read the original post again, especially the bit about it being a joke with little practical application, created for a demo to a Raspberry Jam.

If it has a value it is to show just how capable a Pi is, emulating x86 on its ARM to early '90s slow PC standards. Nothing else. So worry not, nobody's going to try to advance the cause of Windows 95 on the Pi.

I make and sell radio kits for the Raspberry Pi and more.
http://shop.languagespy.com/

Windows 3.11 would most likely be faster. Or just plain old MS-DOS.

This is so awesomely funny it hurts. Thank you I thought it was going to be a long night for me but now I be chuckling the whole time I am at work

http://www.raspians.com - always looking for content feel free to ask to have it posted. Or sign up and message me to become a contributor to the site. Raspians is not affiliated with the Raspberry Pi Foundation. (RPi's + You = Raspians)

Simon
PS I still run a working Win98VM in one of my schools ( effectively just a simple NAS that everyone uses as a file sharing area)
Seeking help with Scratch and I/O stuff for Primary age children
http://cymplecy.wordpress.com/ @cymplecy on twitter

Mequa wrote:Windows 3.11 would most likely be faster. Or just plain old MS-DOS.

I wonder how a Windows PE based system would perform or Windows Embedded ?

Anything XP-based will be much too slow. It struggles with Windows 95 as it is.

kerml wrote:The rpi project is intend to kids learn to use and start programming on computers.

How is that possible using a MS OS?

Windows is just a nice platform for gamers!

You're joking too, right?
note: I may or may not know what I'm talking about...

Wow, I see this thread has lit up again when I turned my back. Glad to see you're all entertained by it, anyway.

I like the AmigaOS emulation. I can never quite be bothered to rip the ROMs from my 1200 though.
I make and sell radio kits for the Raspberry Pi and more.
http://shop.languagespy.com/

Worth maybe mentioning, is that ReactOS is a attempt to make a binary compatible windows clone, it's VERY lightweight, and might run ok-ish on the RPi with Bochs or QEMU. With the added benefit of (potentially) running current windows apps.

Mequa wrote:Anything XP-based will be much too slow. It struggles with Windows 95 as it is.

Anything XP-based was always too slow. So what's different.

I really never understood the ReactOS project why have an open source version of Windows when most PCs have them pre-installed anyway or if you're a Linux user you could just run WINE instead.
The last time I tried ReactOS on Qemu it was slow and buggy as hell sure it must be such a great achievement to be able to run Freecell on a Windows clone but it's no match for well established operating systems like NT4 or XP.

Well... I urgently need to install Windows 7 on the raspberry pi!

Because I want to install software on it!

Here's my Windows 3.11 emulation on Raspbian. Minesweeper is playable.

There's also Solitaire, but no Spider Solitaire as that came with later versions of Windows.

I also got Clickteam's original Klik 'n' Play from 1994 running on the Raspberry Pi, albeit slowly:

Performance is something along the lines of a 386. In modern terms, extremely slow. I'm not sure if QEMU is any faster than DOSBox.
I've stuck to 640x480x16 colours, although higher resolutions are available with drivers. I'm not sure if they'll be much slower though.

Mequa wrote:Anything XP-based will be much too slow. It struggles with Windows 95 as it is.

Did you compile E-UAE yourself?

I've been thinking about getting FS-UAE working, but it needs OpenGL and fails to compile with OpenGL ES

bloodline wrote: Did you compile E-UAE yourself?

I've been thinking about getting FS-UAE working, but it needs OpenGL and fails to compile with OpenGL ES

Yes, E-UAE is fairly easy to build from source.

There are several other versions of UAE which would work on the Raspberry Pi. Most likely FS-UAE and PUAE will be too slow, and variants of UAE4ALL will provide the best performance (but less compatibility). E-UAE runs AmigaOS 3.1 reasonably well.

There'a also the AROS project which provides an ARM-native rewrite of AmigaOS on the Raspberry Pi, currently on top of Linux, but eventually as a stand-alone OS.
Locked
41 posts