Got one of those a couple of weeks back and found that it happily runs a USB3 1Gbps Ethernet adapter, and with an "A" to "A" cable will power the Pi as well - not bad for a quid.

Yes it is great value a Quid

Special introductory price of 9.90 Euro, for a limited time only !

Almost £8 (without P&P), more or less twice the price of the Pi it sits on

Special introductory price of 9.90 Euro, for a limited time only !

Almost £8 (without P&P), more or less twice the price of the Pi it sits on

Add in the cost of the Pi Zero too and you might as well buy a higher model Pi that comes with more USB ports!

It's a bespoke add-on board for a niche device, I don't see how you could do it for less than EUR10.

Sure, you can add a pound shop £1 hub if you don't mind the thing dangling off a cable as opposed to an integrated, engineered solution that adds functionality while retaining the zero's footprint.

I like the recessed socket for nano BT/WiFi dongle - hope it hangs far enough off the Zero ground plane so as not to affect WiFi RF performance.

It doesn't show how it connects to the Pi, there are some wires included and tucked away in the picture?

So not quite an

A bit more like a hack (IMHO). So, not for the more novice user.

Sadly no header pins for USB signals so some degree of hackery inevitably involved if you want to avoid straying outside the footprint (connecting conventionally via the uUSB socket proper).

Given the various hacking approaches to giving the Zero more USB ports I thought I would mention a couple of quite neat (IMHO) solutions that involve no hacking beyond sticking things together, no soldering and no discarded cases:

The one on the left is a Belkin powered hub. The ModMyPi Zero case is an almost perfect fit on top of it. Obviously it's not quite so neat a package if you have to use a big, ugly cable to connect the two, but Ali Express offers a little cable that keeps the whole thing neat and tidy. You can back-power the Zero through the USB cable if you are so inclined.

The one the right is smaller and cheaper. Again, the case fits very nicely on top of the hub. The case and the bus-powered hub (and the wi-fi dongle) are from MakerSpot and seem quite good value, especially the "Zero Mega Pack". You do have to wait for them to arrive from Hong Kong and MakerSpot, unlike some Far East retailers, does add a carriage charge.

There have been posts suggesting that you must have a powered hub to support keyboard, mouse and wi-fi. My Zeros are generally run headless using Raspbian Lite so that is not an issue for me, but I rigged one up with the whole shebang, using the bus-powered MakerSpot hub, just to check it out:

All I can say is that it works: boots up and connects to the Internet over wi-fi. My desk is fairly close to the wireless access point, so it may be that the dongle was using minimal power.

I'm not sure how much use any of this is. I don't know if I'll ever have a use for a 4-port Zero, but they're fun to play around with and my inner obsessive approves of things that are small, neat and functional ...

Look at the hubpixed ( search for it in google). It is perfect Hub for Raspberry Pi zero - does not require any connector or cable and uses the test points on the bottom side to the raspberry pi zero to make connections using springs.

It has 4 regular USB Type A connectors and takes power from the Pi Zero board. A PTC fuse prevents shorts.

Kickstarter has this board for $10.

digger72 wrote:Look at the hubpixed ( search for it in google). It is perfect Hub for Raspberry Pi zero - does not require any connector or cable and uses the test points on the bottom side to the raspberry pi zero to make connections using springs.

It has 4 regular USB Type A connectors and takes power from the Pi Zero board. A PTC fuse prevents shorts.

Kickstarter has this board for $10.

Well if it gets the funded target, so not actually available right now, if ever.

It looks like the lack of USB on the Pi Zero is a problem for lot of people.
There is other new Kickstarter campaign with a new solution:
https://www.kickstarter.com/projects/di ... no-solder/
They add a USB for tiny wifi dongles and you can choose a little 3D case.

texy wrote: Well if it gets the funded target, so not actually available right now, if ever.
Texy

Looks like their 100% target is met and it is going to start shipping in March.

You save a lot on shipping if you order in more than 1 quantity.

When I had designed hubpixed - the 4 port USB hub for Pi Zero without any cable or connector the current consumption thing came into my mind. In hubpixed, the 5V Power supply is taken from the same 5V source as the wall mount power supply. So, its current consumption is limited by two factors - the wall mount 5V USB Micro power supply and the Fuse i built into the Hubpixed. The fuse is rated at about 500 mA - and works in a kind of ganged mode - which means that the total current consumption would usually not exceed 500 mA - which is reasonable for a typical WIfi, Keyboard and Mouse usage.

There are more than 300 user so far and none has reported an issue with current for Hubpixed. It is available at amazon, ebay and referencedesigner.

The Hubpiwi is the next upgrade of the Hubpixed. It integrates a Wifi Module in the Hubpixed. As in in the hubpixed its does not require any cable or connector.

It has been posted on kickstarter.

Geeky gadgets has written about it

Only about three days to go for HubPiWI project on kickstarter. For those who do not know, HubPiWi integrates a USB Hub and a Wifi, without the need of a Cable or a connector. See this picture. 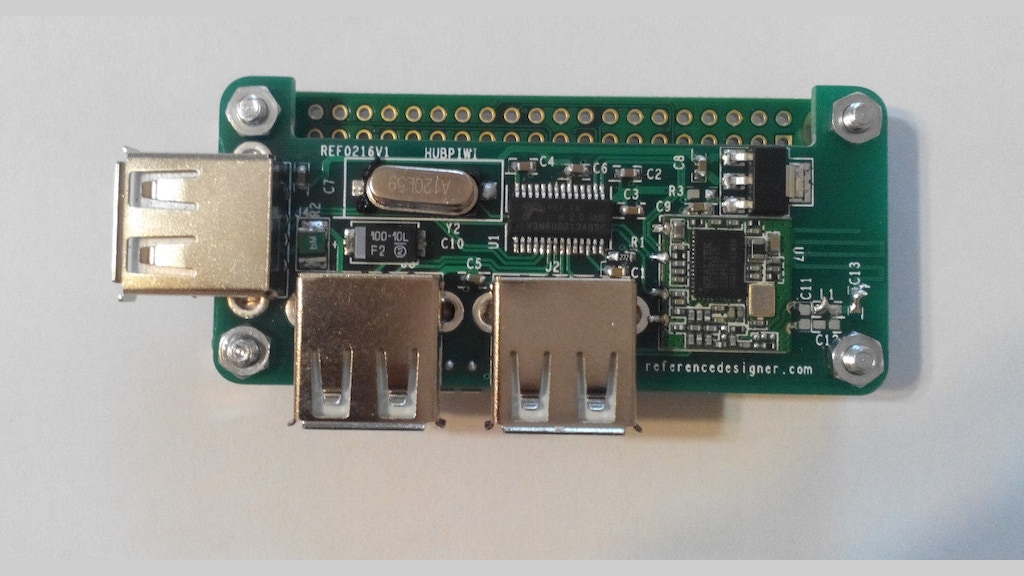 A HubPiWi for newer 1.3 has also been announced. So it is your chance to get the HubPiWi as early as June 2016.

I too was having problems with my Wifi USB dongle not being recognised.
Turned out, that I was using a 1A USB power supply - switched to a 2A version and it all worked!

TheGuyUk wrote:...You need a strong power supply as mentioned on the OTG.

While the Pi Zero itself can be run with relatively little power, if you are going to connect an un-powered hub and a bunch of other peripherals, then you need a stronger PSU for your Zero. I suspect this is a contributing factor in at least some of the problems people are having with hubs.

Another issue could be the type of power supply you are using. Phone changers might seem like a good idea, but many will drop well below 5V under load (phone charging is a lot less picky about voltage than computers are). Some will work, and some won't. If you don't have any way of testing the voltage of your phone charger under load, and you are having issues that could be related to power when using it with your Pi, then I would strongly suspect it as the cause.

You should have a good quality microUSB cable to deliver power to the Pi as well. Look for one with at least 24 AWG power wires (most are 28 or 30), and preferably lower (lower gauge = larger wires).

Also, while it may seem counter-intuitive, wireless keyboards and mice can actually use less power than wired ones. The ones using 2.4GHz are usually the most efficient. For example, my wired USB keyboard uses more power than a Logitech Unifying wireless dongle.


Brandonjh00 wrote:I don't know if it's just luck, or what, but I spliced a passive belkin usb hub with a micro usb to reduce to bulky adapter...

There are smaller OTG adapters. These slip right inside the USB plug. 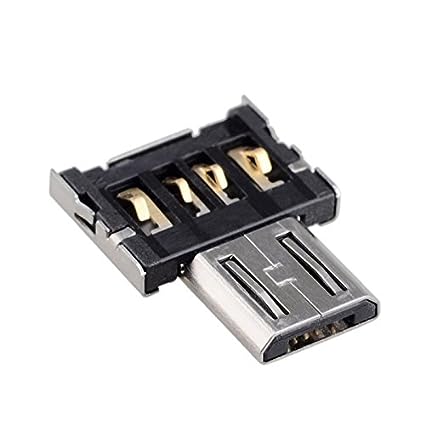 I used this $4 USB WiFi adapter.
And one of these tiny USB OTG adapters.

The same OTG adapter could used with standard USB cables, USB flash drives, USB hubs, and most other things with a USB-A plug on it. I originally got them to use with my phone and tablet, but they work great with the Zero as well.
Last edited by HawaiianPi on Tue Oct 25, 2016 11:47 pm, edited 1 time in total.
My mind is like a browser. 27 tabs are open, 9 aren't responding,
lots of pop-ups, and where is that annoying music coming from?

Some more details on the Hubpixed, the famous connector less hub for Raspberry Pi Zero.

The launch of the newer Raspberry Pi Zero 1.3 changes the location of the test points where the Spring Pogo Pins will connect. The Hubpixed now comes in two versions - the previous one is now being called Hubpixed 1.2 and the newer one is called Hubpixed 1.3 - You will need one or the other depending upon which mode you of Pi Zero you have.

Hubpixed 1.2 and 1.3 are available at reference designer, ebay and Amazon in US.

If this helps, I have just tested my Raspberry PI Zero using a passive 4-ports USB HUB code NW-CR1101 (made in China, it came with an electronic versión of Mao´s Red Book....

and there I connected an old USB keyboard and a USB mouse, and all of it worked with no problems.
My power supply was a SPIKE USB power supply code PST-2105UE which I bought because it provides up to 2,1 A (2100mA.) A common cell phone USB charger cannot provide usually more than 300 to 500 mA.
My video output was a 32" LG screen, the only HDMI I had available. And, as I said, it all worked smoothly.

I have just received my Pi Zero and connected it up to an HDMI monitor, a Dynamode powered USB hub with Rapoo WiFi keyboard/mouse dongle and a 2.5A power supply which is supplied specifically for the Pi3. When using the hub the Zero will not boot. If I disconnect the hub and power up the Zero - plug the hub in after it starts booting - it works OR if I plug the dongle directly into the Zero's OTG/USB cable it works.

Is this normal behaviour? I'm sure I saw somewhere that using a hub was preferred - presumably to minimise the current being taken from the Zero.

For those having issues finding working usb hubs,
after trying several I found a working one at 3am in a Walmart of all places.
$11 Onn branded 4 port usb hub pictured below works flawlessly.

Use emotion for many and reserve reason for a few.

Hi
i have the problem with hub usb unpowered
this hub work properly with rpi2 but not work on rpi0
i have buyed another one and the problem is the same!
i have try to dmesg and the hub is correctly recognized but the keyboard or mouse not work
if disconnected keyboard from otg cable and connect hub and and try to connect the keyboard on the hub not recognized!!!

if i connect the pendrive to hub, that is recognized !

i dont know if the problem is with slow peripherals, but i don't understud why the hub and keyboard/mouse work very good on rspi2!!!
can you help me please?
i use the same image sd card of rpi2 (raspbian) but i have try others distro
Locked
97 posts