over heating pis, exploding sumsung phones. what next?
Antikythera

I am not sure if there is just a problem with particular RPi's, though I just received a RPi3 today, have been using it for about 6 hours now, took an IR of the SOC, as well as the internal, and it has not yet exceeded 51 degrees C, despite intentionally pushing it with all four cores at 1200MHz. So maybe not all RPi3 are made equal.

Currently in the processes of updating what needs updating to run RISC OS on the RPi3 (not to mention the error I made with accidentally writing an ARM Linux over my main RISC OS SD card earlier today, when setting up a RPi 2B for a friend

)
RPi = The best ARM based RISC OS computer around
More than 95% of posts made from RISC OS on RPi 1B/1B+ computers.

Well mine get hot enough just sat there doing nothing when turned on.

If I run the camera web programming from the forum on it, it gets uncomfortably too hot to touch.

Luckily I tend not to be toughing it.

DavidS wrote:I am not sure if there is just a problem with particular RPi's, though I just received a RPi3 today, have been using it for about 6 hours now, took an IR of the SOC, as well as the internal, and it has not yet exceeded 51 degrees C, despite intentionally pushing it with all four cores at 1200MHz. So maybe not all RPi3 are made equal.

I was beginning to wonder if there was something wrong with my Pi3s, as I've not been able to get them anywhere near 80C, 45 to 55 being normal when I am doing basic stuff like builds - not using the GUI much. When running an SDR app with a full windowing display with constant update it goes up to around 60C. If I'm just using it like a PC writing text etc, then 40ish.
So, I'm pleased to see someone else have the same results. I do agree that there must be differences in manufacture for the SoC which are exposed when the clock is run near the limit. As we all know, extreme over-clocking in the Intel world does depend on selecting the CPUs that will tolerate a fast clock.

My Pi3s run uncased with no heatsink. I think Pis were meant to operate in their birthday suit.

DavidS wrote:I am not sure if there is just a problem with particular RPi's, though I just received a RPi3 today, have been using it for about 6 hours now, took an IR of the SOC, as well as the internal, and it has not yet exceeded 51 degrees C, despite intentionally pushing it with all four cores at 1200MHz. So maybe not all RPi3 are made equal.

It will do some NEON stuff on all four cores.

Pithagoros wrote: My Pi3s run uncased with no heatsink. I think Pis were meant to operate in their birthday suit.

If you plan to put a RPi3B in a case you should add a heatsink. Or buy the very pretty Flirc case which uses the whole case as a heatsink https://flirc.tv/more/raspberry-pi-case

My RPi3 sits naked on the back of my naked RPF official screen and doesn't often get too hot to touch.
Languages using left-hand whitespace for syntax are ridiculous

I hope the next model (Pi3 B+ or Pi4) will solve the overheat problem.

i486 wrote:I hope the next model (Pi3 B+ or Pi4) will solve the overheat problem.

My guess is the old 40nm lithography is reaching its limit.
Hopefully the Pi sells in large enough numbers now to justify the cost of reducing it.

I have read the reviews on the case you linked a lot of people have had parts break during assembly, I have the case linked below the one without the fan, they are made in the UK and are very strong, and it is easy to get the microsd in and out.

Forrrge wrote:Has anyone tried one of these off the shelf solutions ?

Yeah, I briefly considered it. It will help a little bit, but not much. 5C maybe? Give or take. There are some videos on youtube.

You only need the one heatsink on the SoC (the other two are superfluous). Considering it includes 3 heatsinks suggests it was geared to the Pi2.

For the Pi3...a Bigger heatsink is better (passive cooling with no case at all, or a case with fan).

Even with my huge 12v PC fan (70mm x 10MM), I still throttled and overheated with one of those small copper heatsinks when running Neon instructions. 5C or so, that's all it will give you.

That the Raspberry Pi is prone to get heated up while working is a well-documented fact. This may not be much of a problem in generally cold climes like say, UK, Canada, or similar places, where the ambient temperature is rather low. However, the scenario turns somewhat hellish in the tropics, and particularly so, on a hot day, when the ambient could climb to anything from 30 to 45 degrees Celsius.

The RPi is often housed in an open 'case', when the temperature rise could be within 'specs'. But the moment it is enclosed in a case/box, temperatures beging shooting up to unhealthy levels. Many investigations have been done into this and the conclusions/recommendations are obvious. Use a good heatsink only, or a heatsink/fan combo. It would be educative to check out the links below.

A heatsink (or a few) then is a requirement, though the fan could be left out as its contribution is to a lesser degree. However, a few things would militate against these standards solutions. First, that of added noise from a whirring fan, particularly in a setup with the Pi+DAC combo feeding a hi-fi system. The second is the added cost and trouble, especially for those who are not very good at manipulating miniscule parts. (Two or three aluminium heatsinks that could be put on a thumbnail cost a bundle, when you compare it to the price of the Pi!) Then there is the likelihood that these hardware swould make mounting other functional HATs virtually impossible. Another reality is that almost every chip in the Pi (I have the 3B+ in mind here) contributes heat, and they too could do with some cooling in the interests of trouble-free performance in the long run.

What better way to achieve this easily than to have a purpose-designed Heatsink HAT? 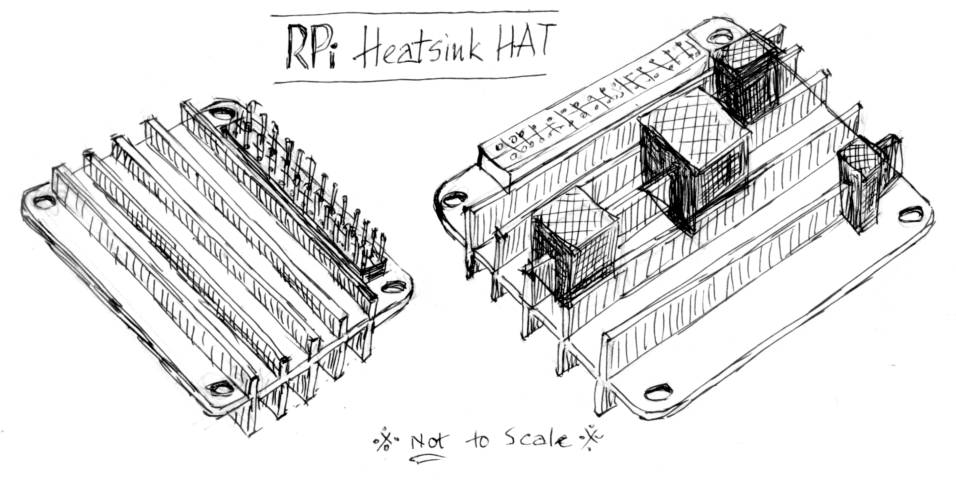 It will be an aluminium moulding/casting with fins above and below the plate, with moulded square protrusions that would rest on top of the SoC, the USB chip, the wi-fi module's metal cover and the miniscule chip behind the DC input. The HAT will also hold a 'feedthru' GPIO connector. Four neoprene washers below the HAT will provide enough 'give' to mate the square protrusions to the chips (coated with some heatsink compound) for effective heat transfer.

I would love to see the day when somebody would make such a HAT available at a reasonable cost!
Locked
111 posts