My name is Ama Simons and I am novice electrical and biomedical engineer! I just started using the Raspberry Pi to do fun projects in health care. I love learning new things, i love self-improvement and nice aesthetics.

Nice to meet you all,

Hi, everyone. I'm Andrew and I am electrician engineer if based on my diploma

But basically I like to build some cool things which make my life easier than buying them in stores.

Ready to help someone)

, I hope to learn a lot of things here and I want to thank you in advance !!
maurizio

Hi. My name is Chase, but you can call me Cheez. I'm a musician who is a retrogamer at heart.

I'm looking forward to using my Pi Zero for playing both old and new games (the latter being homebrew of course). Anyway, I hope to get to know this community and have fun working on stuff.

Hi everyone my name is Keith, I just ordered raspberrypi 4 to use for Ham radio. Just so everyone knows I haven't got a clue so this should be a fun learning experience.

Hi human beings and others
I'm a quater-geek who promised a small-power-headless-remote-backup-storage to a friend. I'd rather be turned into a frog

That's why I'm there.

Hi all, I'm Luigi from Eugene, Oregon.
I'm the owner of the rustconverters.
I just bought Raspberry Pi 3 Model B+ for my project.

Hi,
I am currently working on a project with a raspberry pi 3 b+ and i do not understand everything, so i came to this forum to learn, discuss and ask questions.
Thanks.

New to the board. Built a pi dak board style family calendar about a month ago for my first build and now I'm hooked. Have 3 or 4 more projects in mind. Cad designer by trade, tinker in my spare time.

Greetings! I'm Scott, and I'm a Twitch streamer. I'm currently building a studio space to record and stream gaming content. I'm pretty new to Raspberry Pi, so I'm trying to educate myself on its uses in my project.

I have already been on this forum for a while, but never really introduced myself properly. My name is Brion Davis, I live in Hurricane, WV and work at a Veterans Hospital. I have been into computers since the Commodore 64 days and throughout the Amiga days. I remember back when AOL was originally Quantum Link. Lol I also remember Compuserve and the old GEnie online services and when the WWW was text only and browsed with Lynx using Gopher as the defacto search engine.

I also enjoyed the PC days and remember the Tandy 1000 and 2000 like yesterday. I enjoyed DOS and and Windows 3.1 but disliked the future versions of Windows. I was using Linux far before it was popular and my experience with Linux goes well back into the 90's back to the beginning. I also even have Unix experience which is even further back using shell accounts to get online with Commodore 64 and 128 computers back in the day. I even have owned the even older VIC 20 system and used it.

Having been in the field since such early times, I tend to view modern computers as quite unlimited, including the Raspberry Pi. I see modern code for the most part as being very sloppy. The garbage that is out there now would never have worked back when Processors were 8 bit and ran at just over 1 MHz (6502). Many resources are wasted these days and if code was as tight as it used to be, it would baffle one's mind at even what a low spec modern computer could do.

I have owned Coleco Vision, Atari, NES, Super NES, Sega Genesis and all the classic systems. I love retro gaming of course. The story lines of the old games are beyond the junk that you see selling now. So much more effort was put into it back in the days getting them to work on such limited systems and the story lines were far more skillfully written. Most of the this crap you see these days is spit out as fast as possible to earn as much money as can be made with the least bit of effort put into optimization. It is shocking how many PS4 titles I have seen absolutely choke the system when it should have the resources to run them. Lol

I hope to be a valuable member here and hope to learn as well as assist where I can. I have been enjoying this forum quite well so far and the Pi has given me that old time computing feeling again. Glad to be here with all of you.

hello pi people. This is gonna be a new experience for me. 20+ yrs in the auto industry. 7 yrs in the commercial/industrial contruction(roof systems) I took 2 yrs of electronics in high school. So I will be leaning on you all and my kids for doing this project. So the reason I am here. I decided to follow a path that has been on my mind since I was a kid. Tow truck driving, I know its kinda wierd. So talking to some people, the systems they use for trucks, is an adequate system. My problem is there is only so much room in a truck. I want to build one of the new pi4, with a back up camera. I will have other stuff on the pi4 also. But this will be my primary objective. Thanks.

Hi everyone, I’d love to make friends,i am 35 and have been into linux and some programming since 2000.
I’ve only just got my pi today for Retropie purposes,but epileptic seizures have destroyed everything I knew so I am looking at a pi,like your average person does-it’s piece of hardware (but a glorious piece that is) it’s a pi 2 I think,at a guess I can find out more information.

I will be upgrading the case at some point.
please have a bit of patienceI have classic autismandIntellectual disability.∞

I’m Sam, a long time lurker mainly been using a pi2b ( now converted to a adb-s receiver) but decided to sign up after buying a pi4 as I was seeing weird behaviour but before posting for help read the endless amounts of stickies and found it was normal.

I live and work in London and also use pi to help with my job in big data.

I met the Pi for thet first-time a couple of weeks ago when a friend showed an NES emulator he built on top of it.

I liked the idea and just bought my first Pi4, which should be arriving in a couple of days.

I have some Linux knowledge (used to work with Linux server administration 15 years ago) and I'm currently focusing on AI-related projects.

I know how to code in both Python (not an expert but can do some stuff), T-SQL and ABAP.

Now I'm looking to start playing around with C++ as well.

I am Charles. I have been on the Pi wagon since pi1 B version.

I am a part time enthusiast for pi related items, electronics, music, and wood working.

Just upgraded from pi3 to pi4... Working out the kinks...

Hi, I'm senpaidev. I've always wanted to have a pi of my own ever since it was launched. Initially it was not available in my country and eventually when it was I didn't have the money or permission from the family to get it. Fast forward couple of years I completed my bachelors and got a job, I was so close to making a jump and getting a pi 3b+ when I heard a rumor that a much better pi 4 is in works and I should wait. My manager had a 3B+ and he did allow me to play a bit with it, and actually he was the one who asked me to wait. I waited and about 2 months back I was finally able to 4GB variant of the pi 4b. Having been playing with it for about a month now, have set up a pi hole and want to set up a minecraft server as well. My original goal was to set up my own password manager on it instead of relying on some 3rd party provider. For all of this, I feel a 64 bit kernel would be the best. Raspbian does offer an option but right now I just want to experiment. Waiting for Ubuntu Mate releases TBH. I've been an Ubuntu user since the 10.04 days. If it gets a bit too long or I grow impatient I might jump and user Arch or Gentoo. Anyways thats who I am.

I'm Rafal. Working sice 1999 as Java Backend Developer. I sommer I got my first Pi 3 B+. On this Pi I istalled pi-hole and some monitoring stuff (TICK stack). And it makes phun. As I saw Pi 4 then I had the idea to build own Pi Cluster. Some weeks later my cluster is ready. 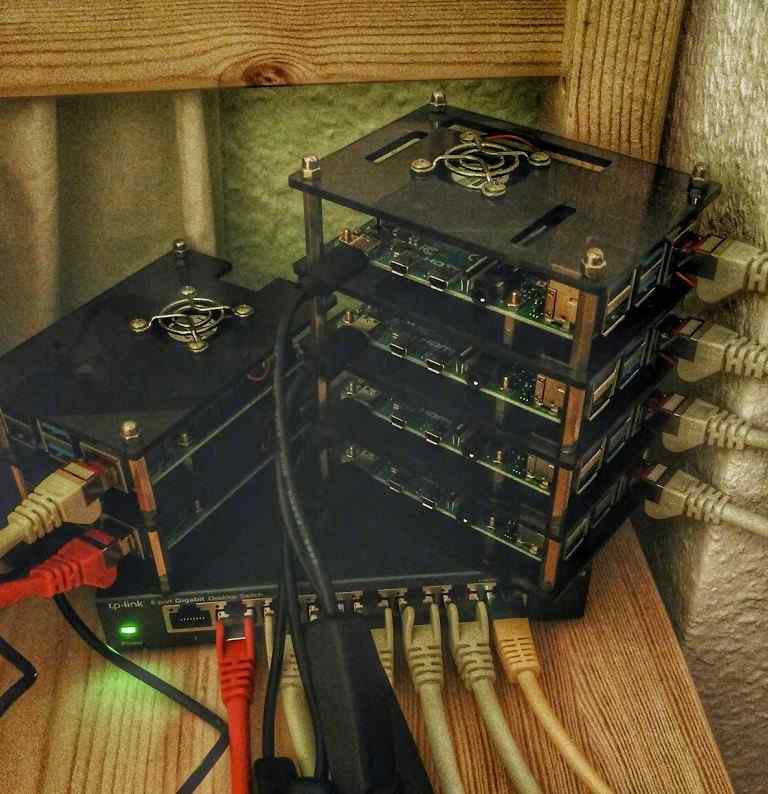 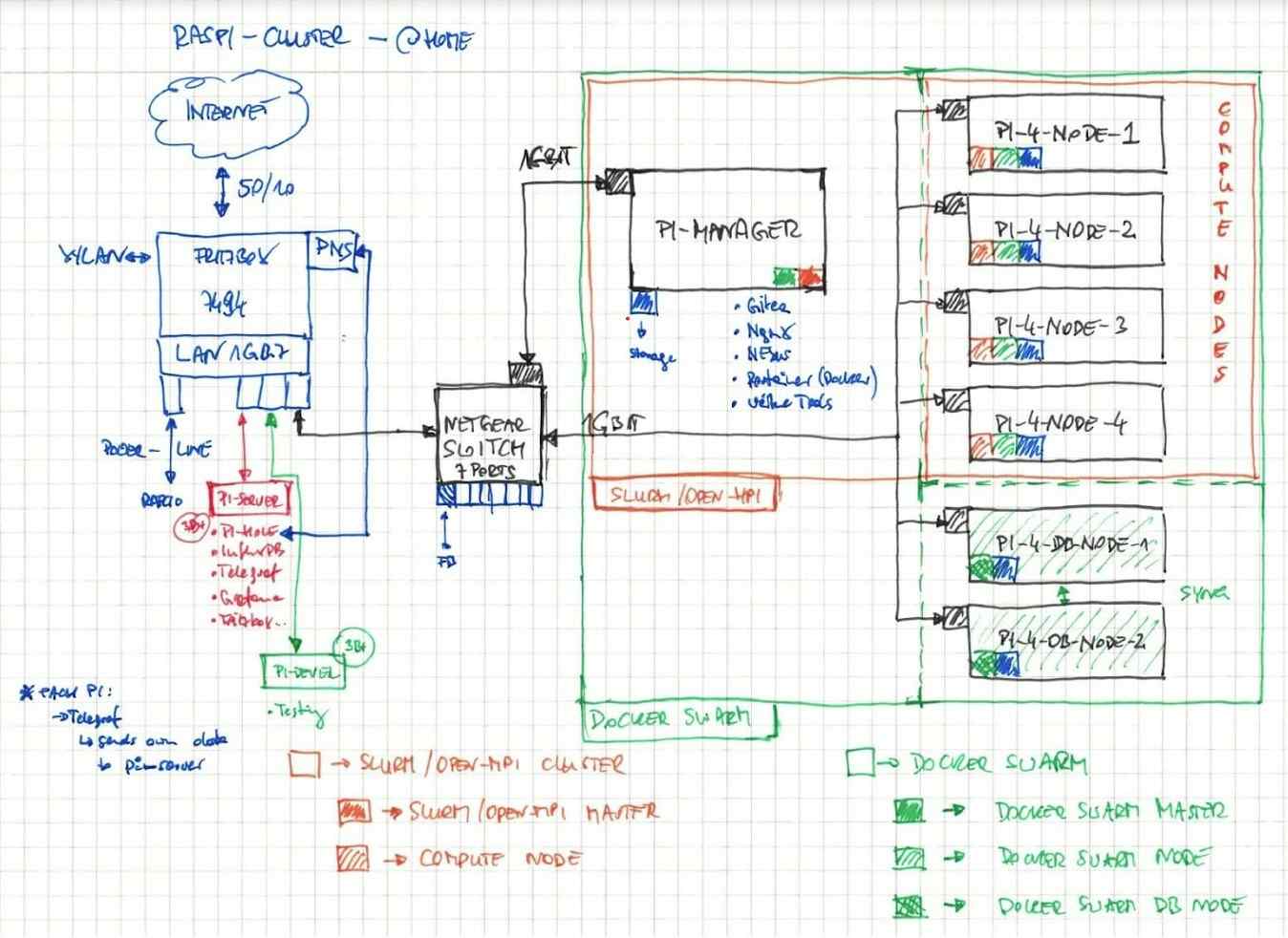 Hello I am New here. this forum Is a great place to discuss

I got a Pi B in the first batch of pre-orders and then a 2 and a couple 3s. My original is being preserved as a museum piece in a sealed sarcophagus. The 2 runs as a pi-hole, one of 3s records all the critters in the back patio and the new four is perusing the net, plexing, watching OTA, monitoring the pi-hole and remoting into any other pc in the house, all at the same time. Bloody incredible. I spent about 100 bucks for the 4GB plus accessories and thought that was a bit much for a Rpi, but after further eval., I think it was worth it. I got the Micro Connectors fan/sink and the Pi Case but it overheats with the fan running if the case cover is on fairly quickly when you have a bunch of stuff going. The stress test sends it way up real quick if the cover is on. Take the cover off and as long as the fan is running the stress doesn't send the cpu temp over 68. So I recommend either getting a case with really good ventilation or drilling some holes if they aren't there already.

Real name is Mike. First learned programming (FORTRAN) in 1973, using a keypunch machine, on an IBM 370. I’ve since updated to an RPi 4 and Python. I’m planning to build a music server as my first RPi project.