Well done RPF/RPT, it's a great little computer concept, just wished I'd have had one of these when I was younger - massive possibilities ......

"Never get out of the boat."
Absolutely goddamn right!
Unless you were goin' all the way...

Awesome, reminds me of computers of the 80’s such as the BBC B, ZX Spectrum and Commodore 64.

Would love to see a pic of the board inside.

Would love to see a pic of the board inside.

There will be third party teardowns out very soon - Jeff Geerling has done one.

It's a new design of boad (not a Pi4 in a case) and has a large heat spreader inside, and the C0 2711 chip which has better clock gating so blocks can be turned off the save power. This means we can run at 1800 by default. It runs very cool. 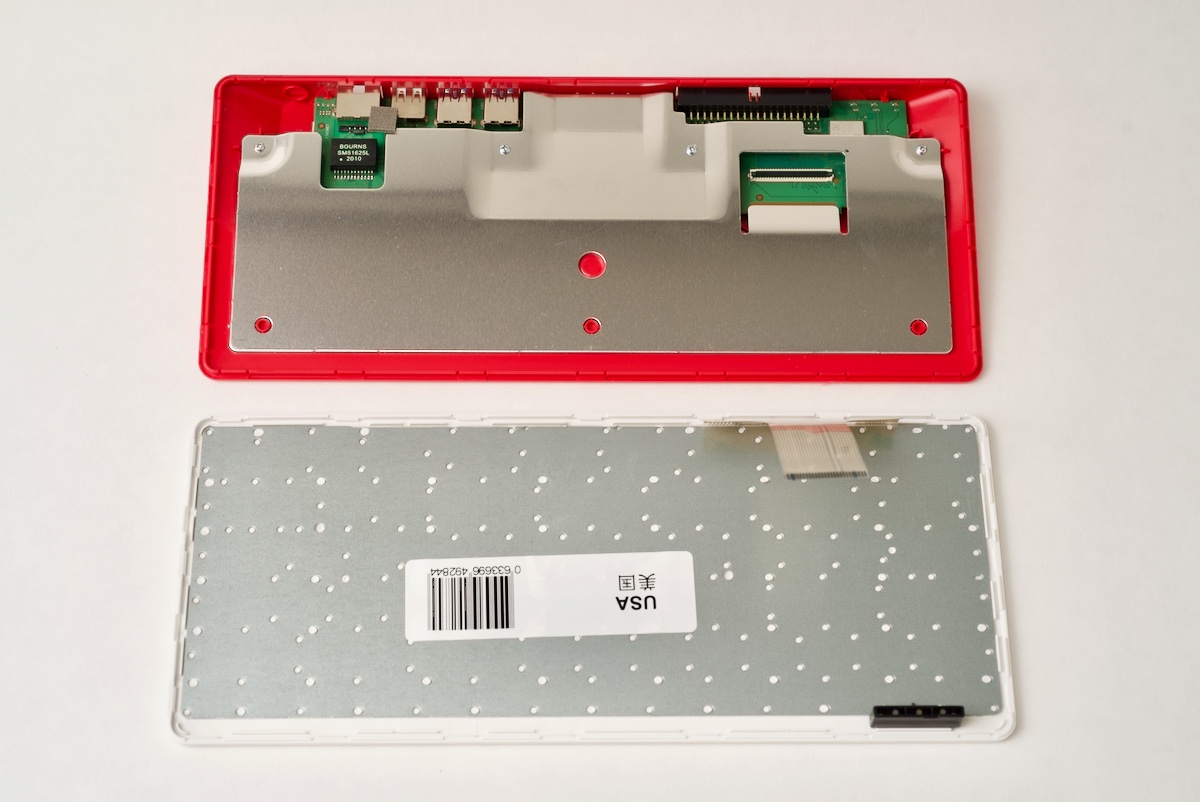 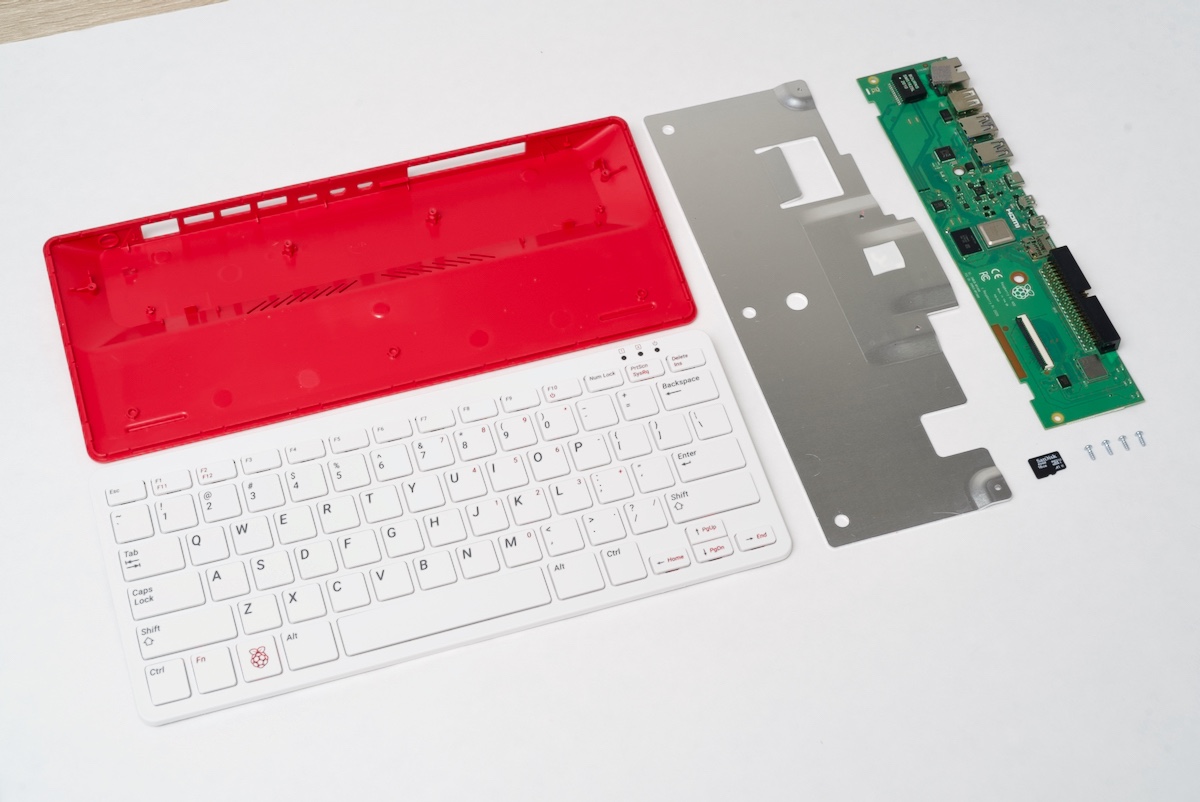 1.8GHz default clock? Is that a factory overclock, different revision of the chip or parts selected from the premium bin?

What does the power button do?

Very interesting product!
(like my ZX81 or Commodore 64 in the early 80s)

Your website seems to be over its limit, the link does not work most times.

Is it possible to use POE ?

Edit:
same as CM4 ... which is clocked slower.
So does that mean that CM could safely go to 1.8GHz ?

I've been using the CM4 at 2.147 GHz for a ton of testing the past week, and haven't run into any hiccups. Even regular Pi 4 B's will handle the overclock well (I haven't had one fail, and I've maybe tested 25 or so of them), but the key is the cooling. Using a good heatsink and/or fan will help immensely.

is the usb-c port wired up any differently from the pi4b?
was the second ADC of the PMIC wired up to the extra CC line?

i notice there are 3 usb-host ports, is the 4th port used for the keyboard?

I see from Jeff's teardown video (at 4:40) that the new Ethernet controller supports POE+ - so I presume the issue is the lack of wiring inside the Pi400 to take power from there.
Supporting the new controller is interesting though ... perhaps it means that the next RPi release has built-in POE using it.

Is it possible to power Pi400 via GPIO header .. and where is pin1 of the header (can't see this from the product brief)?

Why are people asking questions that seem to be asking to use the Pi 400 in a way that its really not intended to be used? This is a desktop version of the Pi4. That is the target market. If you want power over GPIO, or OTG boot or the PMIC ADC why not use the Pi4? There are trade offs, pick the right tool for the job!
Principal Software Engineer at Raspberry Pi (Trading) Ltd.
Working in the Applications Team.

Dagnabbit! I WANT ONE!

when will it be available?
....seems like my local fave supplier may be a bit to late with new item stockings....
"Don't come to me with 'issues' for I don't know how to deal with those
Come to me with 'problems' and I'll help you find solutions"
Some people be like:
"Help me! Am drowning! But dont you dare touch me nor come near me!"

jamesh wrote: ↑
Mon Nov 02, 2020 9:13 am
Why are people asking questions that seem to be asking to use the Pi 400 in a way that its really not intended to be used? This is a desktop version of the Pi4. That is the target market. If you want power over GPIO, or OTG boot or the PMIC ADC why not use the Pi4? There are trade offs, pick the right tool for the job!

i wanted to use the PMIC to interrogate what is on the usb-c port better
the pi4b isnt suitable for that, because only 1 CC line is wired up, and you cant even detect the usb-c cable if its in upside-down

having both ADC's wired up would only be a single extra trace on the pcb, and would allow you to detect if the cable is going to a host or device, and detect if its an e-marked cable, then the host/device mode can be fully automatic, but not via the legacy OTG_ID pin

please sell just the board as a SKU, perhaps with stick on heat sinks.

Its a pi with all IO on one side. this is a huge win for many many projects. I can already see me getting a bunch of these, especially with the higher clocked CPU helps, and it will be eWaste just to toss the keyboard for them.

Will it be available in black color too?

Eventually, according to an Eben interview somewhere. No idea when. It's needed for commercial usage - call centres etc.
Principal Software Engineer at Raspberry Pi (Trading) Ltd.
Working in the Applications Team.

LOVE the form factor. Totally takes me back to my youth with the BBC Model B. Happy days

Also just really practical. Total thumbs up.
Have one on order from Pimoroni now.