I made a Raspberry PI Laptop

i am still waiting for two usb y split cables from china that i've ordered, but i actually got the hdmi adapter today, so i couldn't resist getting my lapdock up running.

i hate wires, so the bird's nest was only for testing it ...after that i soldered the wires directly to the pi board.

also note the micro switch soldered to the "run" terminals, which has start and reboot function.

after this intervention, one of the usb port is not available anymore ...but who cares ..there are still three on the pi2 board and two on the lapdock. if it's a big deal you can block this port with your favorite chewing gum or what ever pleases you.

here's some pictures of the feast. i do love these motorola lapdocks and i'm happy that i bought two of them on ebay !

when i got the stuff i ordered everything will be changed ...but until then it's workable, as it is now

I have now ordered this wire. According to the comments it should work, we will see.

Delivery is scheduled between Feb 1 and Feb 17.


Well according to the comments on this cable on Amazon it works between the RPi and Lapdock but I can say, without a doubt, it does NOT work with an RPi B+ and a Lapdock 100. So damn annoyed. Does anyone know of a readily available cable the actually works, and is known to do so, with the lapdock, specifically the Lapdock 100? The lapdock works fine with a phone just not the RPi. The RPi also works fine when connected to a HDMI port on a TV.

Does anyone have a link to a cable/connector that is till available the works with the lapdock and the Raspberry Pi? One that supports CEC to ground which is needed to make it work?

@TheEditor - Sorry to hear you are STILL having problems with your Lapdock. I thought in your post of Dec 25th viewtopic.php?f=63&t=6747&start=800#p868647 that you had your screen working with NOOBS up to the point of installing or selecting an OS, which indicated your previous cable worked?

Did you try with a plain Raspbian install without NOOBS - that should work straight away as it doesn't suffer the reboot that NOOBS uses and causes the Lapdock to switch off the display?

Anyhow the last cable I bought off ebay is no longer available, but it seems to have been relisted by the same supplier at http://www.ebay.co.uk/itm/Lapdock-Micro ... 806961915?. Where are you based - I guess the US as you linked to amazon.com?

Edit: If you think the cable is not working, are you getting no display at all, switching off after 9 seconds, or switching off when NOOBS reboots? Is it no longer working like in your post of 25th Dec?
PINN - NOOBS with the extras... https://www.raspberrypi.org/forums/viewtopic.php?f=63&t=142574

I have a Lapdock, one of the original ones, which I connected to the original Pi when I first read this thread. Now the Pi Zero is available, I wonder if it'll will fit inside the Lapdock case? It's not an Atrix. Anyone tried yet?

Someone stuck a zero in the smaller Lapdock 100.

I am hoping that this is just something simple and that someone has come across this before ?

I have made a Raspberry Pi laptop using a Motorola Lapdock 100 and it is great ! Up to now I have been using a separate Logitech wireless USB keyboard and I have the Pi configured correctly so that all the keys work as expected. However, now I would like to use it without the external keyboard and just use the one built into the lapdock. With the current setup, all the keys work except 2; the hash key and the slash symbol to the left of the 'z' key.

I have tried many different keyboard options from within the raspy-config menu and cannot get these 2 keys to work. I really need the hash for Python !! If anybody knows how to get all the keys on a Lapdock 100 working as they are labelled, please let me know.

Many thanks in advance !! 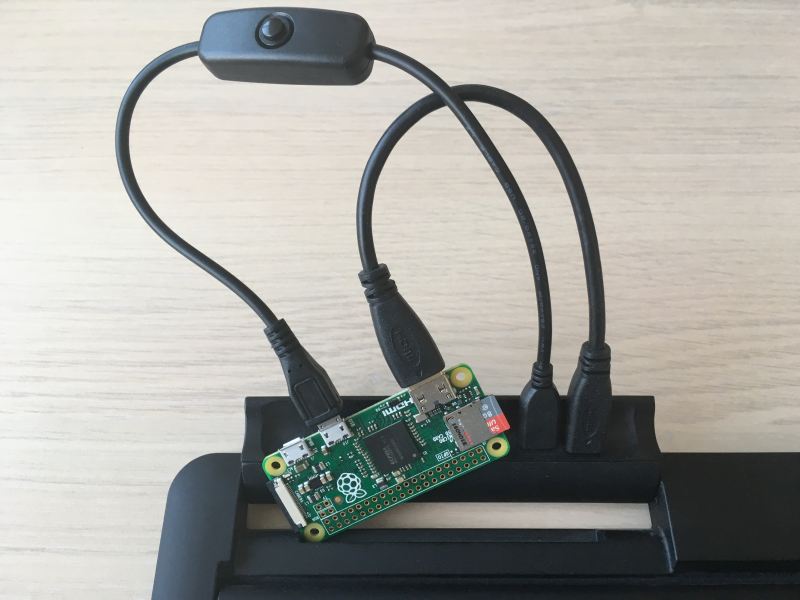 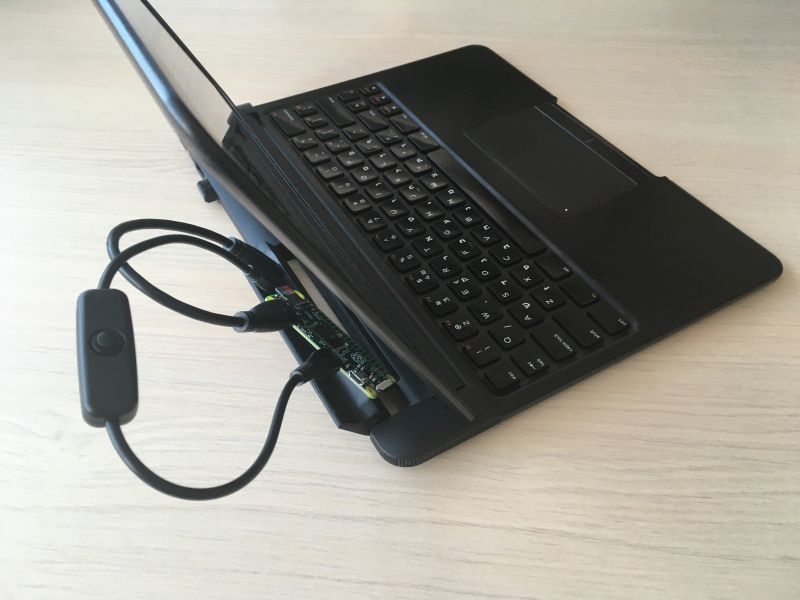 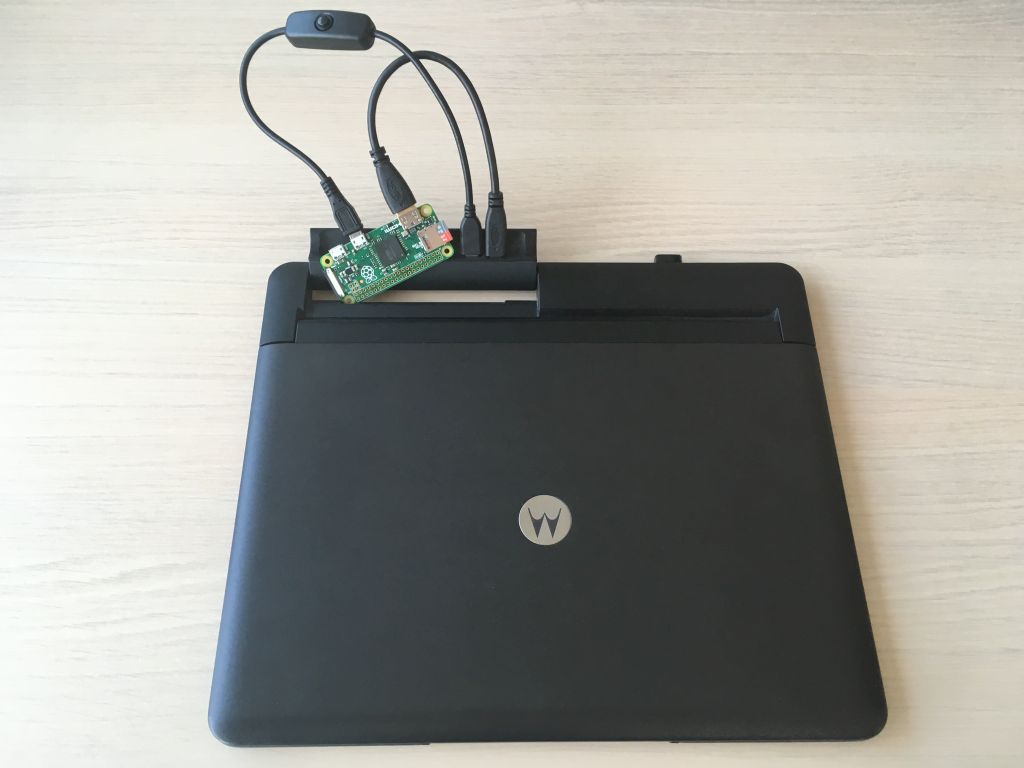 helo so I have a pi zero setup with my atrix lapdock.

I want a litel more power. Any sujestions on what the max a motorola atx dock can power portably ?
Evan if I have to splice usb wiers.

I guess I can all ways set up a outsid battery for the pi3 !? hmmm

I recently created a YouTube video that demonstrates my journey in setting up my Raspberry Pi LapDock. If interested, please see this:

I've since made some improvements to the connector (fused the HDMI+MicroUSB using a cable tie, then hot glue and finally electrical tape). This has improved the ability to reliably have mouse/keyboard/HDMI on almost every boot. Sometimes, it's just a little off and I don't have keyboard/mouse. Though, 90% of the time it's spot on. No wiring/soldering was needed.

I've managed to get the Lapdock 500 pro to connect to the pi 3 and created a prototype adapter for the connection.

Here's the link to the video I made to explain the connection. I apologize ahead of time for the poor quality of the video.

Hey guys, I hope someone is still visiting this topic after all this time. I am getting a raspberry pi 3 and a lapdock from a friend tomorrow and he's already bought the cables and did all the modifications necessary for it to work. But, as I'll be using it as my primary device for college, I need to make sure the rasp doesn't power off when I close the lid. I read about pulling some wires from the usb capacitor already present in the lapdock, but, how exactly do I do it? I have some experience with electronics and all that, but I'm worried that I end up messing something really bad, and the raspberry + lapdock is really expensive here (Brazil, it should be something between R$400 - R$600).

If I don't get any answers from here, I'm thinking of trying to connect one wire to each end of the capacitor, and then connecting it to and LED (in series with an 300 ohms resistor, of course) and seeing if the LED stays on after closing and opnening the lid... Is that right? (if it is, it should be as easy as taking off the wires of the LED and connecting them to the respective 5v line)

I struggle to get my lapdock to power my pi3B, especially under load, whereas my 2B is ok.
It may be necessary to restrict the max frequency to stop it rebooting. But your mileage may vary depending on which lapdock you have.
PINN - NOOBS with the extras... https://www.raspberrypi.org/forums/viewtopic.php?f=63&t=142574

If you’re worried about messing up the dock, I’d just get an external battery as a power source for the pie. Wouldn’t add too much bulk depending on the battery.

qnhoang81 wrote: ↑
Sun Mar 18, 2018 10:57 pm
If you’re worried about messing up the dock, I’d just get an external battery as a power source for the pie. Wouldn’t add too much bulk depending on the battery.

Let's say that I end up getting one of these: https://produto.mercadolivre.com.br/MLB ... 000mah-_JM (sorry for the language, but I have to search one that I can get, and fast, not waiting for 3 to 6 months while it comes from China straight to my house and then pay taxes for it). I don't expect it to be original, but heck, I don't care, it just needs to be as slim as possible. Would the lapdock still be able to charge the battery and power the rasp while it's being charged? Just so you don't have to google translate everything, it says the output max. capacity is 5v 2.1A, which I think should be okay, because I will be using the rasp + lapdock just for some openofficeing and reading some PDFs/PowerPoints (slides, AKA Libre Office Presentation).

I will use the raspberry in my graduation project and as a media center at home, but just leaving it connected to an outlet and acessing via SSH, and connecting it to my house's outlet and using my TV as the display, in that order, so it won't be drawing that much power while in class.

BUT, I still want to use the capacitor, is it really that simple to wire up? I don't think it should screw something up (I just discovered that it will be connected to a Lapdock 100) as I would test with and LED and a resistor... I just don't want to lose my time trying to figure it out