I do not understand electronics much so can any one explain the following :
For RP's video output through HDMI,
what difference can we expect between a HDMI TV and a HDMI monitor ?
Maximum how much resolution / refresh rate / response time can we expect on such a TV if used with RP?
And which HDMI TV would be better to use with RP, LED or LCD ?
I am getting cheap HDMI TV but HDMI monitor of the same size are expensive - i am not sure what do we get extra by paying more money.

old displays are better. HDMI computer screen are usually better in as far as they can often go to a higher resolution than 1080p and a very good refresh rate and better stand for viewing and working with. They are both designed for different use purposes. The TV is for further distances than the closer computer screen. Can you give links to the models you atpre looking at?

What is the meaning of old display ?
Is that TV or Monitor ? LCD or LED ?
For RP which would be better ?

My apologies that should have read oled But the auto correct switched it. Led screens the colours are produced from the leds, the LCDs act more as a filter and you have a back light. http://www.ledvslcd.com from what I have just googled about that screen it looks okay. It doesn't run at 1080p HD so you may have an issue with text but it is probably better to see it in person really. I go for screens around the 22inch+ for computer screens and look for a minimum resolution of 1920x1080, but I use them with pi and computers

I am very sorry for my ignorance, but i am not sure which kind of display devise should 'technically' work better with RP ?

I have a very old CRT - TV with the video and audio ports as shown in the attachment.
What kind of cable do i need to use RPi ?
I would rather use the 3.5 mm jack for audio so i just need advise for the video cable. 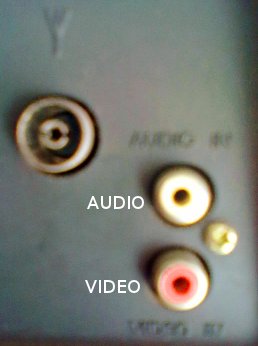 The white and red are audio, video is not on the picture (the other is HF)
Probably you have Scart or Svideo on your old CRT TV so you only need an cheap adapter 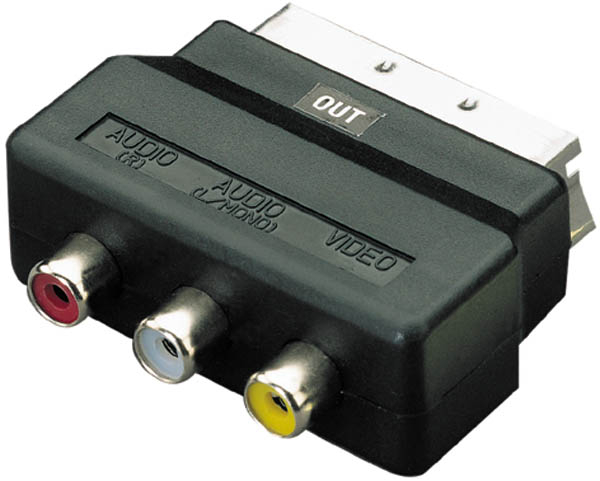 Thanx for those pics. I am a lil confused as my TV shows yellow for Audio and Red for video. There can be one audio port as it might have just a mono input. But why a change in color ?
Today i came across a small cable in the market (see attachment) will this kind of cable solve my purpose ? In that cable yellow was on one end and white and red were on the other. 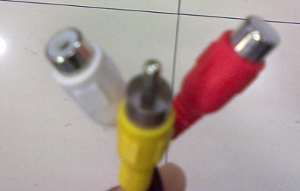 Forget about the connector colors of your TV, it probably was designed before there was a standardization, the standard now is:
yellow = Video in
White = left channel audio in
Red = right channel audio in.

So you need a standard RCA cable with two male RCA plugs on either end (regardless of color), and plug one end into the yellow RCA connector of the PI, and the other end into the "video in" of your TV.

As for audio, it seems your TV only supports one input (mono).
The output of the PI is stereo, and you need a cable from 3.5mm jack (as on a headset), to two RCA plugs, and use one of the (either the red one, or the white one) to connect to "audio in" of your TV. Or you can use a headset (not advised), or connect to your stereo set, or amplified speaker boxes.

The picture you show has one "male" plug (the yellow one), and two female one's. For the video cable you need cables with two male plugs.

Thanx for explaining all that but can u tell me why you wrote :
Or you can use a headset (not advised),
.

The PI isn't designed to put a lot of energy out of the 3.5mm output, not really enough to drive a headset, its safe to do so, but the sound may be weak and or distorted. It will sound much better on an amplifier.

P.s. if you have the latest raspbian, you can configure the PL setting by doing a
sudo raspi-config
from the prompt.

that is easier than other methods.

P.P.S "raspi-config" is a program for configuring your raspberry, and it needs to be started by the "user" with the "rights" to make those changes (the "super user"), so you need to start the program with "do as super user", or sudo.

Thanx , but i have two doubts. Sorry for my ignorance, may be i am asking the same thing twice.

raspfly wrote:Thanx , but i have two doubts. Sorry for my ignorance, may be i am asking the same thing twice.

No problems asking, I'm here to help.
(1) Raspi-config (the config.txt file) is for a whole lots of configuration issues, its a replacement for the "BIOS settings" in a classic PC.
(2) it doesn't matter if the actual cable has two wires, as long as on both ends of the same cable both connectors are male. You can ignore the unused halve. Just one caution, these cables are normally "double", because they are used for audio, that means that for video their quality might not be optimal, but they should work. If you can find a single cable, with yellow connectors on both ends, it will probably give a better picture quality.

Yes, the config.txt (editable with sudo raspi-config) file also controls the type of composite video that is generated, and normally it uses the American (60Hz) NTSC system, if you have another system then you can make a better choice with config.txt for example the european 50Hz PAL system, but also some specialised versions, for japan, and South America. With the right version, you will also be able to get color, on a color TV.
Locked
16 posts • Page 1 of 1