Apart from the glacially slow download from GitHub this is now booted on my 3B with the official RPF 7" display. I just need to fix it up for the US layout keyboard I'm using and get the screen rotated through 180 degrees.

Gentoo is still a mystery. I've used RedHat & SuSE with RPM. I've used DebIan, Ubuntu, Mint & Raspbian with apt. Gentoo has to have something different.

Sakaki-san thank you so much for your efforts and keep it up.
Languages using left-hand whitespace for syntax are ridiculous

Adding lcd_rotate=2 to /boot/config.txt and restarting will achieve the screen rotation efficiently. Apologies if you already knew that ^-^

Gentoo is still a mystery

Yep , there is a difference between know how something works and just using.
Sakaki knows what that is

I just know it works better than any other 64bit Pi OS so I'm using it.

Going to try to break latest version this weekend by using it.
It's probably in one of Sakaki's wiki somewhere, do a "sudo porthole" in a terminal to get a gui version of Raspbians's "sudo apt-get install...."
It takes much longer to install things, that's just the way Gentoo works.
I'm dancing on Rainbows.
Raspberries are not Apples or Oranges

Apologies cjan, I see now what you were getting at. That's quite a nasty bug, and has reportedly been expoited in the wild already, so needs addressing ><

Fortunately chromium-72.0.3626.121 (which has the fix) has hit the main Gentoo tree, so I've put together an modified ebuild with the necessary patches to build on arm64, built it, and pushed the resulting binary package to the binhost.

To upgrade, just open a terminal and issue:

As this is a binary package, the process should only take about 10 minutes or so.
The youtube playback issue is fixed in this version also. I'll put out a bugfix 1.4.1 release of the gentoo-on-rpi3-64bit image shortly with this updated chromium bundled by default; I don't feel comfortable with a vulnerable version being on there, in 1.4.0.

Thank you for pointing this out!

Apologies, not sure I quite follow: by "ALARM", do you mean ... a Pi booted with an archlinuxarm system? Or something else?

Which Pi model exactly are you using? And, what do you see output from dmesg?

Perhaps post in this 4.19 thread instead (I see you have posted to it in the past)? There's example dmesg output there (although mostly on 3B+ devices), e.g. in this post, which shows the /dev/video{10,11,12} interfaces coming up OK under a 32-bit kernel; you may be able to compare that with what you're seeing.

Sorry, but I can't really help you further on this one ><

sorry, save your weekend time, im just test & play around, thanks.

One thought, have you set at least "gpu_mem=96" in /boot/config.txt?

Because, if you use "gpu_mem=16", per 6by9 this will cause start_x.cd (=cut down) to be loaded, and as the name suggests not everything is supported when that happens:

sakaki wrote:[*]I am current specifying "dtoverlay=vc4-kms-v3d,cma-256" and "gpu_mem=16" in /boot/config.txt; are those sensible settings? When the v4l2 camera or v4l2 m2m codecs interfaces are in use, does gpu_mem need to be increased or is this irrelevant?

"gpu_mem=16" will trigger the bootloader to load start_cd.elf, so no codecs.
...

It caught me out!

ok, rebuild with 2 patches only

Hmm, well may be a kernel issue or difference between 32/64 bit I suppose...

My (working) ffmpeg build-flags as follows:

I've just posted a v1.4.1 bugfix release of my bootable 64-bit Gentoo image for the RPi3 (model B and B+) on GitHub (here, includes full download instructions).

For screenshots, and details of the major changes - including camera and hardware codec support - introduced in 1.4.0, please see my earlier post.

A changelog from the prior release image (with upgrade instructions) may be viewed here, but in summary: Users on the prior 1.4.0 release can simply run "sudo genup" in a terminal to upgrade to 1.4.1 (or wait for the weekly autoupdate to do it on your behalf). Manual upgrade instructions for users on older versions of the image are also provided, here.

And, as always, any problems or comments, please post either in this thread, or in the project's (sticky) thread on the Gentoo forums (here).

For those who prefer a NOOBS-style installer, the v1.4.1 gentoo-on-rpi3-64bit images are now also available for install through PINN (called gentoo64 (=regular) and gentoo64pt (=pi-top) there).

PS: Many thanks to procount for helping me set up my own PINN repository (https://isshoni.org/pinn/os), and kindly linking it into the official set!

To get it immediately, issue:

Thanks to Khumarahn for pointing out the necessary aarch64 patches.

I've just posted a short article on the gentoo-on-rpi3-64bit wiki, covering setup of an xrdp server on your RPi3 (here).

Brief instructions for creating a custom TLS keypair (and forcing its use) are also provided. 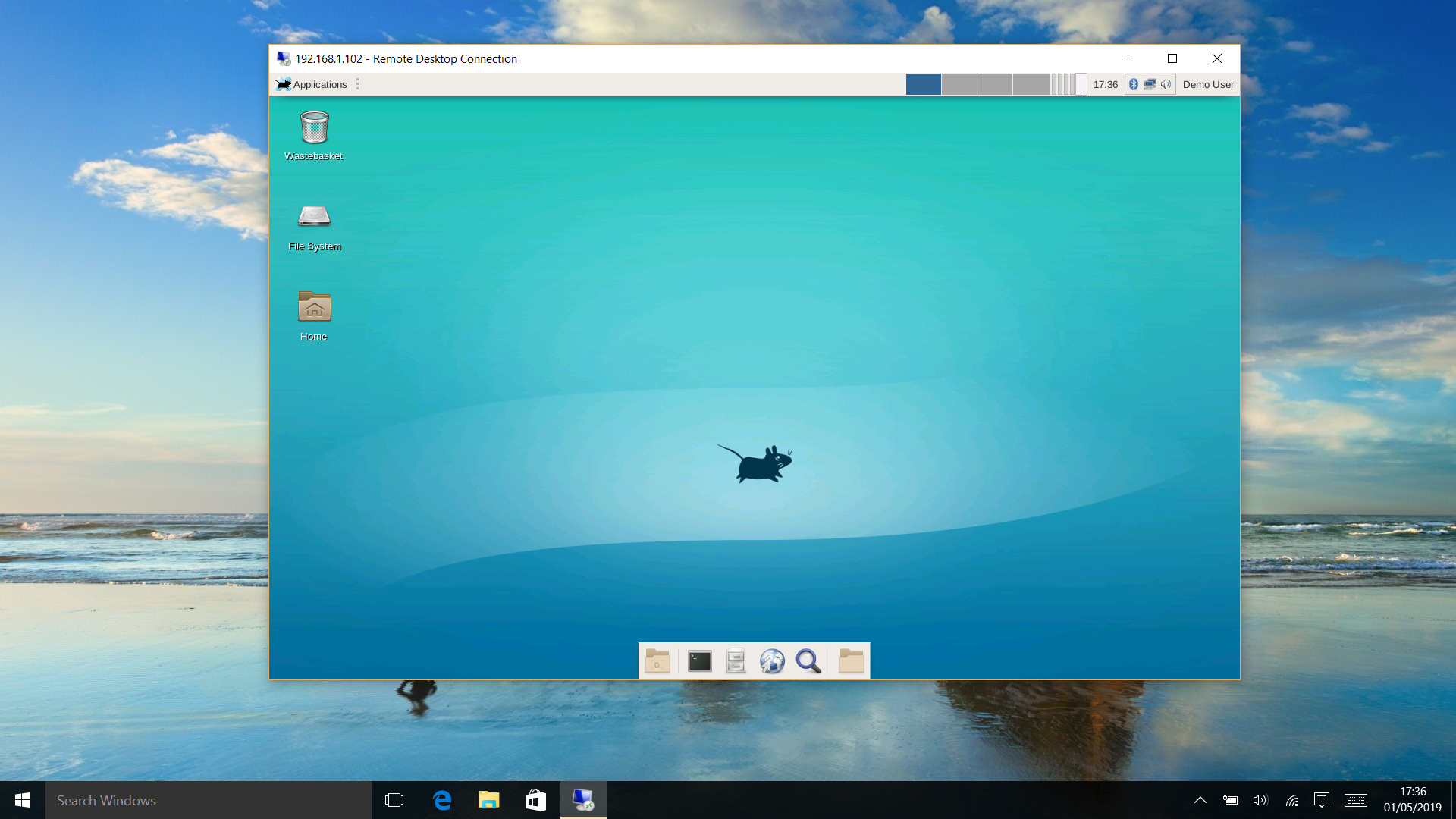 (Instructions for connection via VNC may also be found on the wiki, here).

I've just posted a v1.4.2 update release of my bootable 64-bit Gentoo image for the RPi3 (model B and B+) on GitHub (here, includes full download instructions).

This release sees a number of significant version bumps to the bundled packages: for example, GCC from v8 to v9, Clang from v7 to v8, Chromium from v72 to v74, Firefox Quantum from v65 to v67 etc.

Here's a screenshot of the image running on an RPi3B+: 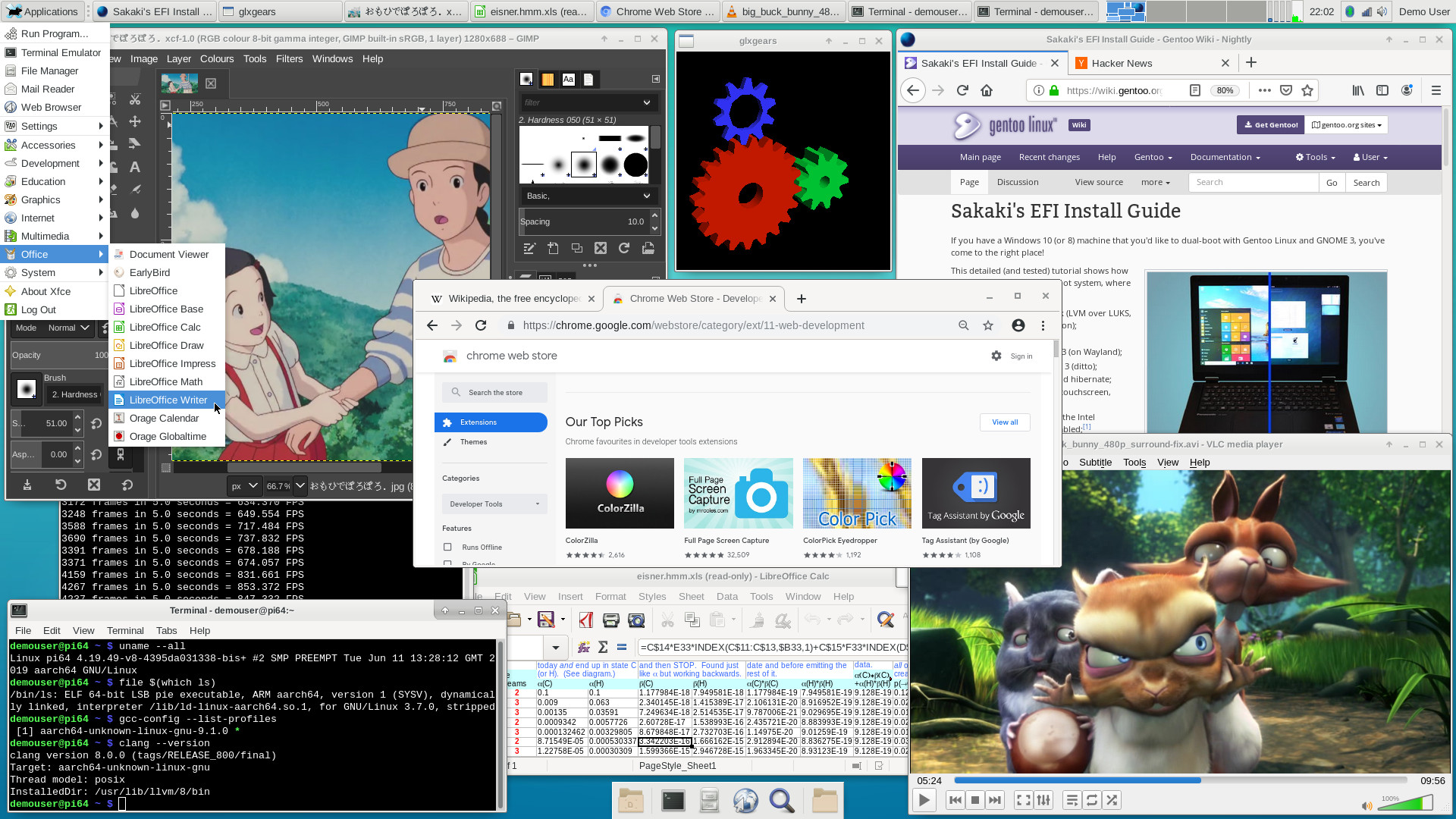 As always, you can burn the image (~1,511MiB compressed) to a microSD card (>=16GB), then boot your RPi3 from it directly (the root partition will be automatically resized to fill the card on first boot). Full instructions for download and use are provided on the project's GitHub page.

The image contains a complete (OpenRC-based) Gentoo system (including a full Portage tree, up-to-date as of 12 June 2019) - so you can run emerge operations immediately - and has a reasonably populated userland (see the screenshot above; all the apps shown, and many others, are bundled), so that you can get productive without having to compile or configure anything first (unless you want to, of course ^-^). Just download, xzcat to a microSD card (or use Etcher), and boot!

A changelog from the prior release image (with upgrade instructions) may be viewed here, but in summary: As before, a variant image for the Pi-Top v1 (an RPi3-based DIY laptop) is also included. Manual upgrade instructions for users on older versions of the image are also provided, here.

And, as always, any problems or comments, please post either in this thread, or in the project's (sticky) thread on the Gentoo forums (here).

PS: I aim to release the PINN variant of this v1.4.2 image in a week or so, real-world commitments permitting ^-^
Locked
552 posts