I've been working with this 20x4 i2c LCD from Sainsmart (i2c board is branded that, LCD board is labeled J204A) The problem I am having is when I write out to it, if the line is over 20 characters it doesn't flow over onto the next line. It skips a line (Attached image shows) and I'm not entirely sure why. The driver I'm using is basically the Arduino driver converted to python by an Amazon reviewer. Here is the code I've been using, any help is appreciated. 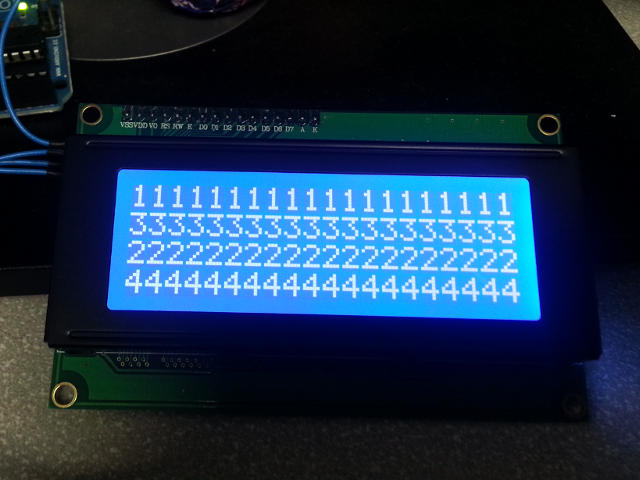 Usually the LCD has a buffer for a single line longer than the number of characters to display, so you could shift them. Try to play with "LCD_CURSORSHIFT" command from your code.

Take a look on the internals of lcd_display_string() function and you will notice, that to move to next line it issues 0xC0 command. So, or you start using the 'line' parameter correctly, setting the 0..4 or you can create own 'lcd_display_text()' function, that will scan your input text and in case of '\n', issue the 0xC0 automatically.

The display and code are working correctly. The standard character addressing for a 20 character by 4 line display with an HD44780 controller is:

If you want to have line wrapping in your expected top to bottom order, you need to provide your own code to update the next character address after the last character of a line has been written.

natbett, you're a genius. Thank you. I got this one from Hobby Components:
http://www.hobbycomponents.com/index.ph ... uct_id=285
And your code works brilliantly. Thank you!
--
Michael Horne - @recantha on Twitter
Raspberry Pi Pod blog - http://www.recantha.co.uk/blog
Cambridge Raspberry Jam - https://camjam.me
Pi Wars - https://piwars.org

Hi MdeJong,
I bought the P82B96 but for me it does not seem to work. Maybe I did something wrong with the wiring. Anyway I managed to get the LCD to work when powered on 3.3v. Using the same LCD as OP.

I've tried to use your code to run my own J204A LCD. I've worked through various errors, but I cannot solve this one.

Thank you very much for this!
I've been fighting an I2C HD44780 LCD Display for nearly a week and your code made it finally work.

I'm using this code, and is working well.

However i would like to make scroll in different directions.

Wich code i must add to do text scrolling from right to left for example ?

I would like to show twitter messages scrolling in one line, but i don't see other way of showing that without scrolling it.

And about use custom characters ? is possible ? Is possible show time using 20x4 display in 4 lines with big numbers.

Add this function for char(s) positioning on LCD into file: lcddriver.py:

This code works for me fine. But I like to switch off and on backlight.

Any idea how to turn on/off lcd backlight

drzume wrote:This code works for me fine. But I like to switch off and on backlight.

And I use it like this in my Python code:

On the other hand, has anyone been able to find out how to use custom characters with this I2C LCD?
Banging my head for the past couple of days....

I need a couple of custom characters, but this library has no custom char function, and my attempts so far to make some other snippets work have not been successful...

After some serious hacking (hah! just joking, I'm out of my depth here...), I've created a new, modified library for this type of LCDs (the ones which use I2C, as described above).
I've joined two previous libraries (i2c_lib.py and lcddriver.py) into a single library: RPi_I2C_driver.py
I've put it on Gist, together with a test script with some examples.

Most of it was lifted from other people's publicly accessible code, so I really can't take credit for this.

Anyway, it enables you to create and use custom characters - in the example script on gist I've shown how to use several "sets" of custom characters in the same script. There's also an example of a "progress bar" using custom characters, which is the actual reason why I went into this in the first place

The link is: https://gist.github.com/DenisFromHR/cc8 ... e19dce359d
Hope this helps someone else, too.

There is surely room for improvement: I'm not a programmer, and I'm also a beginner in Python

If you do make any improvements, please share!
Thanks and regards,
Denis

A bit of a post necromancy but I found the thread very handy, I modified the sample code a bit, to display keyboard input.

When trying the "llcd.backlight(0)" command, the lcd become black but nothing is displayed.
In the driver.py file both LCD_DISPLAYOFF and LCD_NOBACKLIGHT constants are the same value 0x00
It's possible to show up text with backlight off?
Thanks

bump on the lcd backlight ?

Yeah, it's quite easy...
When copying and pasting code, you should at least read those files, because they contain some useful information...
The backlight is already coded in the lcddriver.py, just not used.
When you look inside the file, you'll find:

And now you'll be asking: How do I implement that? How do I send those code to the I2C module? It's simple...
Later in the code, you'll see that every command is sent to the I2C with:

So... Since we already have the codes declared at the beginning, we can use "LCD_BACKLIGHT" or "LCD_NOBACKLIGHT" to change the backlight of the LCD (Instead those 0x codes).
Now you have two options:
[*]Write the code directly into your python script, leaving lcddriver.py untouched...
or
[*]Implement the code cleanly into the lcddriver.py
Both ways are easy to do!

Smashing the code directly into your python script, can be done writing this:

and later to turn of... You guessed it:

If you want to do it more clean, you can implement it cleanly into the lcddriver.py, adding those lines of code below at the end of the file:

And we use it in our script like this:

On mine it happened that the screen got blank, but the backlight LED don't turned off. Sooo... I've looked into someones Arduino I2C LCD library and found out that...:

... they write "0x03" and then later a "1" or a "0 (Byte)" to turn it off or on. Notice that they also commented "1 for off since polarity is NEGATIVE", so that make some sense too.
(But Fusseldieb, wait! Why are you using someones Arduino library? This has nothing to do with python and raspberry!!
Yes, it has. I used Arduino and there the library works just fine with the backlight, so I used the codes that I found and ported it into python. Simple.)

Continuing... Reading lcddriver.py a bit more, I found out that to send multiple bytes they used:

I think now you guessed it again, we can simply smash following in your python script:

And it will turn off. And to turn on:

FOR THE LAZY AND CTRL+C + CTRL+V GUYS, BEGIN READING HERE:
(Everything before this was a explanation of how I got here)

Now to do some nice clean integration, we write following in our lcddriver.py:

And now you can go to your script and do:

And it will turn off. To turn it on again, I don't need to even explain, or need I?!?

Note that I'm also a beginner in python and such things and I figured it out - on my own. I registered on this site only to help some poor guy out... (And maybe some others later too). But... I wrote that huge text explaining all kind of things to motivate you guys to read those damn files!! They are also commented, so it isn't that hard!!

I hope that I helped some of you.

Hi
@natbett i found this code and have used it on my raspberry pi.
I have ported it to micro:bit code and was going to put it in a repository on GitHub what license should i use. I personally use the GNU license when i authored the code from an empty text editor, but if i port it i always leave the license and credits intact even if there is very little of the original project left

While respecting your wish to be honourable in dealing with one of the contributors to the script, have you taken into account the fact that @natbett does not appear to have logged into these forums for over 5 years?

I am a bit of a novice on this forum, i couldn't find how to send a user a private message or track a user down by any means.
How did you achieve finding that @natbett hadn't logged in in ages?

How did you achieve finding that @natbett hadn't logged in in ages?

Click on the username natbett at the top of any message they have posted and look at the details in their user profile.

(That means people can see the same information about you..)

I've done some research and the initial fork from Arduino put the code in public domain, I'm going to use the GNU license and hope the guy on Amazon who did some of the conversion to raspberry pi didn't put a license on it.
Locked
24 posts • Page 1 of 1