This is about my (mahjongg's) clone of the Sinclair ZX81, which design is now finished, although I'm planning a much simpler (to build) 4-chip version where I pour the logic contained in some 24 SMT chips in a replica-ULA based on a small FPGA, (on a daughterboard emulating a real ULA, with the same 40 pin pinout as the real ULA, so its really a replacement ULA) while the rest will be like a modern re-imagening of an original ZX-81, just with far more RAM, and a better keyboard, and USB power and composite video instead of RF, to name a few improvements).

This is a 3D rendered preview of it:

note that unlike a real ZX-81 the main PCB is not mounted upside down, but in the same orientation as the keyboard, and all connectors are in the back instead of the left side (because unlike the real ZX-81 main board the board is square not rectangular, and has pinheaders instead of an edge connector, on the left side, where it can accommodate expansion boards). 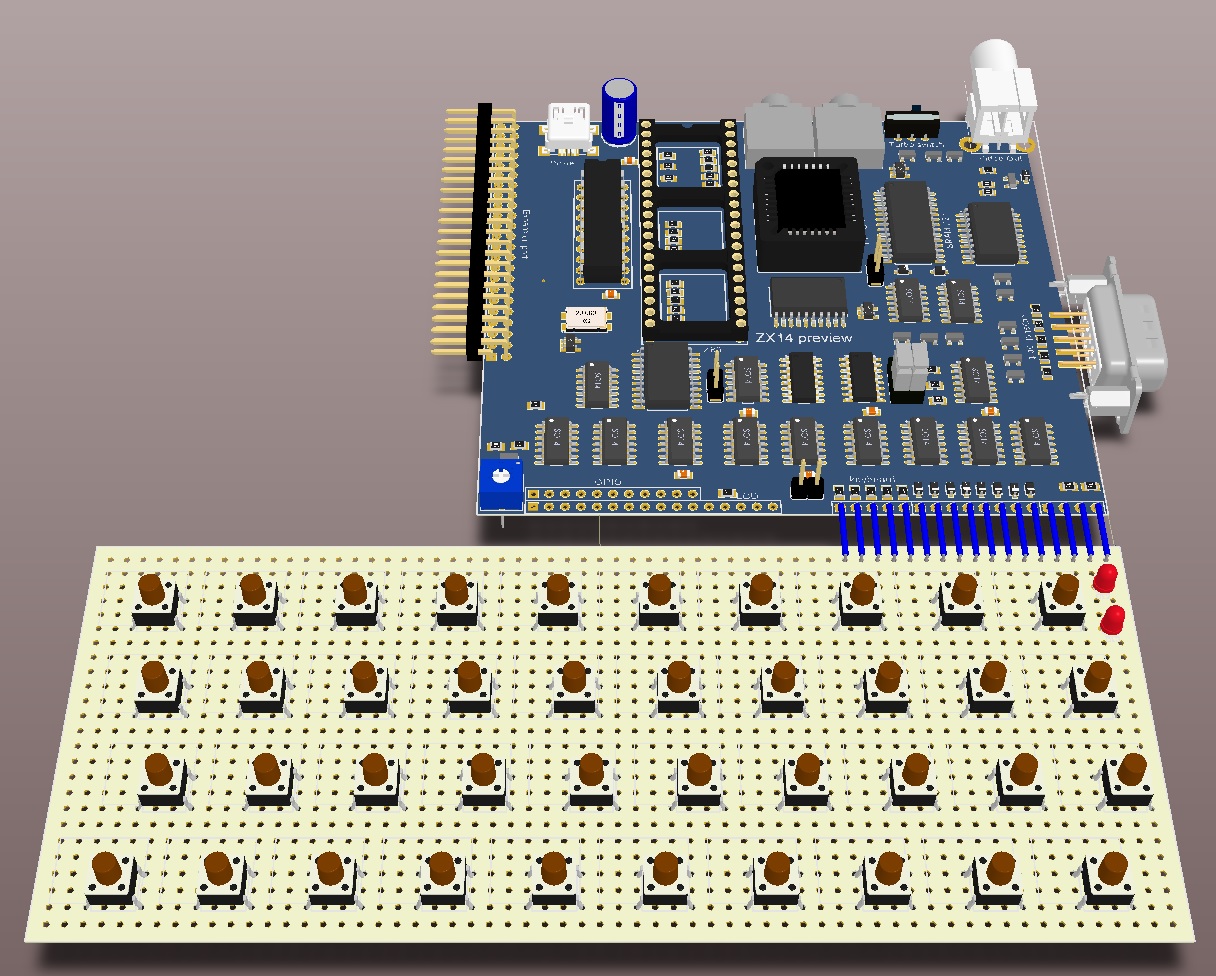 its latest schematic can be found at its current "home", which is the site of "RevSpace", a hacker/makerspace near where I live.:
https://revspace.nl/File:ZX81%2B34_rev_2.1.pdf (now updated 1 november 2015)

As the Revspace wiki is private, there was no public comment section there, (only for revspace members) so I made this thread instead.

more information, background story, schematics, keyboard layout and schematic etc etc, can be found on the Revspace site, in the "projects" section, https://revspace.nl/Main_Page

mahjongg wrote:The ZX14 is my (mahjongg's) clone of the Sinclair ZX81, which design is still ongoing, but this is a 3D rendered preview of it:

Can it run Windows?

The joystick port looks a good idea - does it duplicate keys on the keyboard?

Ravenous wrote: The joystick port looks a good idea - does it duplicate keys on the keyboard?

Yes, it "presses" the 5 6 7 and 8 "arrow keys" and the 0 key for "fire", (jump etc) those are the keys most often used for action games. although 4 of the 5 keys (three arrows and the 0 key) share a common wire, the fifth (left arrow) unfortunately does not, so directly connecting just wires to the switches in the joystick isn't possible, the easiest solution was to use 5 transistors mounted in parallel with the buttons. the ZX14 schematic shows the details.

I redesigned (I have redrawn) the ZX81 keyboard layout, so that you can use a keyboard overlay with 6x6mm buttons of which 3.5mm diameter "plungers" will go through holes in the overlay.
buttons like these: 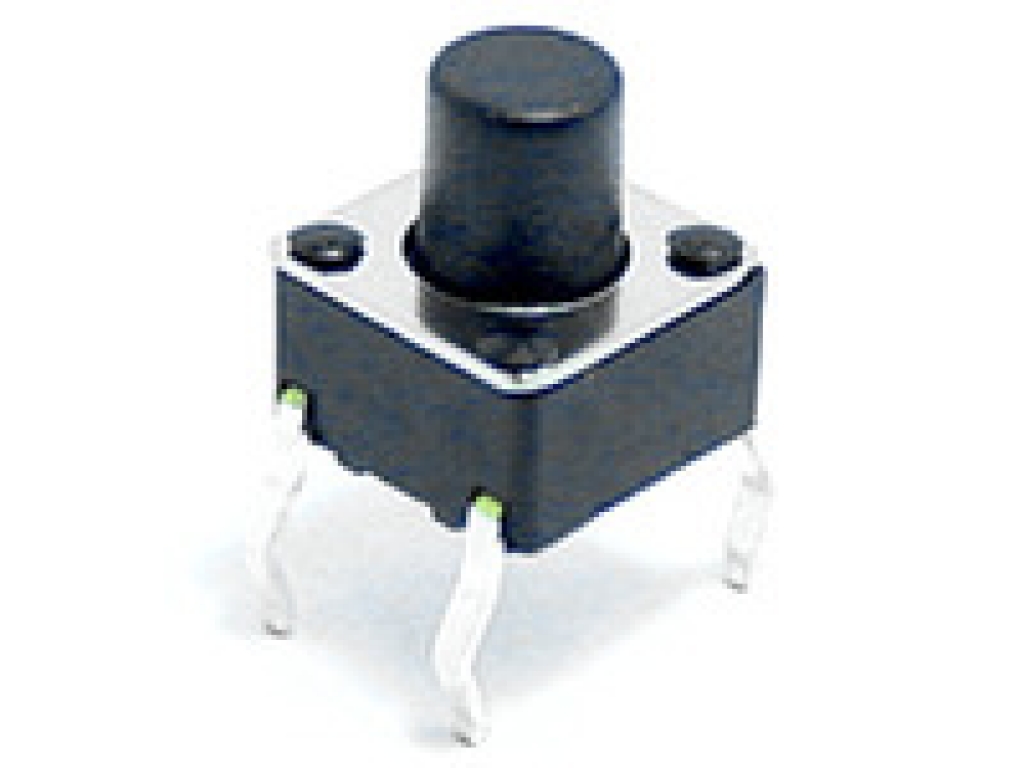 Placed on a standard 1/10" grid perfboard, the button pins will fit with a bit of bending, in an arrangement that you can see in the picture of the ZX14 above, open the picture in a new windows to see the necessary details.
Simply putting the original overlay over buttons would not have worked, as these buttons have too much stroke, so I in may redrawing I re-arranged the texts inside the "button areas" to make place for 3.5mm round holes.
The redesigned overlay looks like this, the brown circles represent the holes for the buttons:

You can compare it with the original:

a .PDF of it can be downloaded from the revspace site if you want to print your own overlay. It should print correctly scaled when printed on A4 paper. I recommend laminating the paper afterward.

ZX81 keyboard replacement.
So now you can also add a keyboard with real keys to a real ZX81, by soldering up 40 buttons to a normal 1/10" grid perfboard (wiring layout schematic is available on the site) of at least 160cm wide (eurocard), and by using this overlay. My keyboard should be compatible with a real ZX81. So its also useable as a replacement keyboard, if the original has disintegrated, as many have.

P.S.
The power of a ZX81 like device lies in the possibility to completely understand it, and that is the antithesis of Windows. As only with full understanding can there be full control.

The latest news is that I have finished the PCB, just in time for 2015 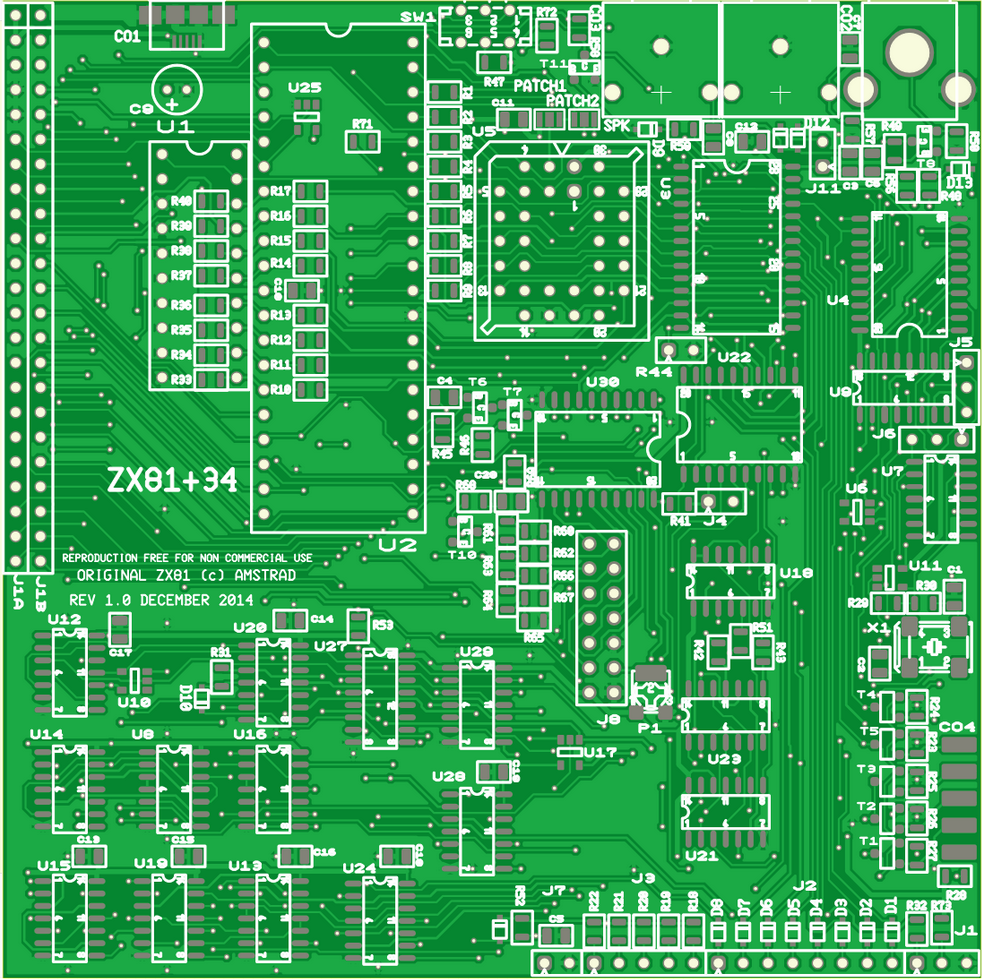 Right click on it and open in new window or tab to see it full sized.


I also decided to rename it, not to ZX15

Sometime during 2015, I will probably build the first prototype, and report here on progress.

on further consideration, I think the name ZX81+34 is too far fetched, but I am afraid that googling for ZX15 would only return results for kawasaki motors, which even have computers built in.

But calling it ZX81+34 is maybe too farfetched and perhaps silly, so I will settle for ZX15 for now.

Obviously I will change the silkscreen.

by the way, here is the latest (Altium) 3D rendering of it: 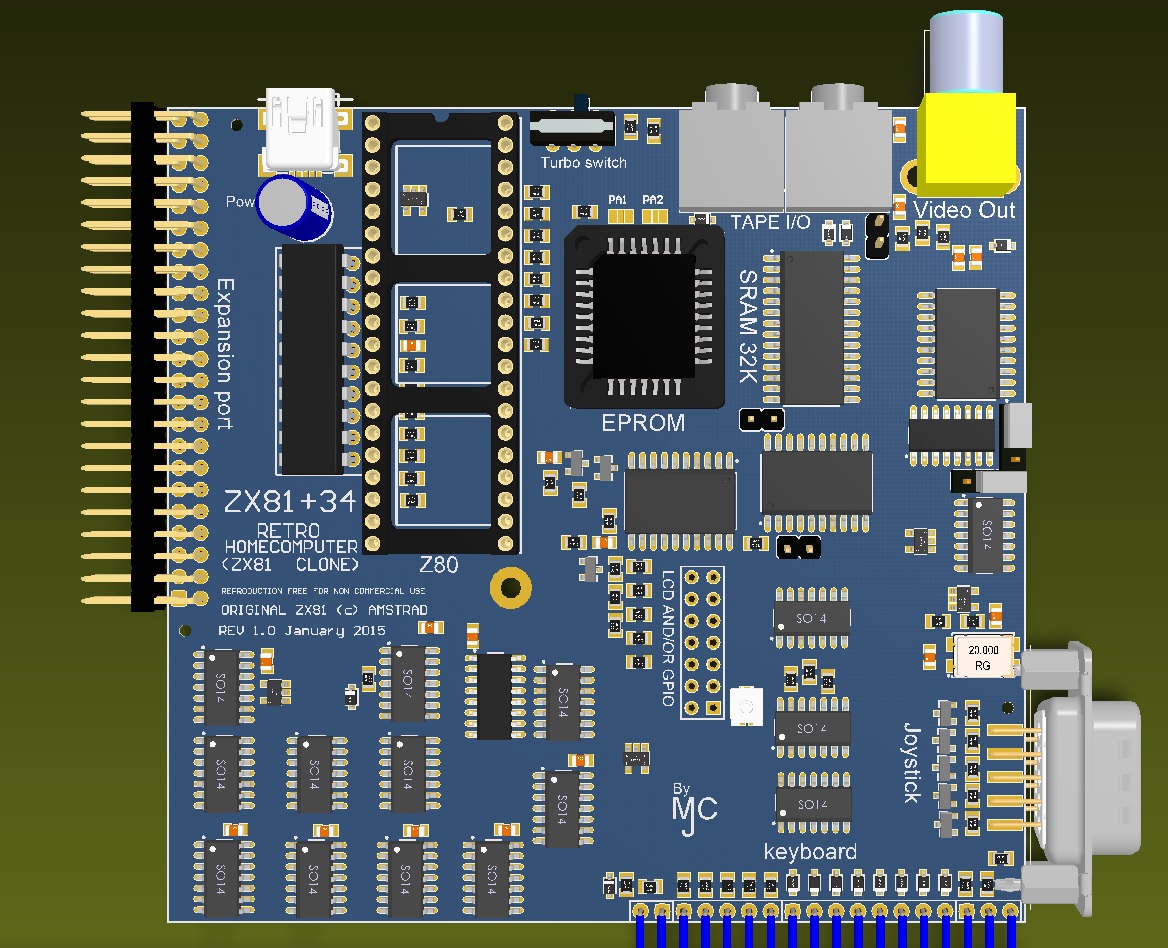 impressive. Give it HDMI.

note: I may or may not know what I'm talking about...

A computer is only as smart as its programmer.

I preferred the old name as it paid homage to the 34 years of development of single board computers since the original ZX81.
Languages using left-hand whitespace for syntax are ridiculous

Yeah saw that, but the C64 was there first, with a joystick with a complete C64 in it and with many games built in.
The "C64 direct to TV". http://en.wikipedia.org/wiki/C64_Direct-to-TV

Modern programmable logic is cheap and you can built devices like the spectrum and even the C64 easy enough with it.

But I wanted to use discrete components so that anyone could build one, because using a FPGA is a bit too much for most people.

Ravenous wrote:Well you could call it the ZX16 instead (I'm only half joking!), or the ZX82!

ZX82 was the original name for the spectrum, which was planned to come out in 1982.

The name ZX81+34 is too convoluted IMHO. But ZX15 is fine, and google doesn't have five hundred thousands Yamaha motorcycle search hits. which it has if you search for ZX14. Unfortunately even "ZX14 computer" will give you an abundance of yamaha related hits.

While googling the ZX15 only gives you less than two hundred thousand hits.


I updated the project page at revspace.nl, more pictures, schematics, and other stuff there.
https://revspace.nl/ZX15_ZX81_clone
Quite soon I will also release the gerber files, and Bill Of Material, and CAD files.

I'm thinking about building a Raspberry PI EPROM/OTP programmer for the EPROM/OTP of the ZX15.

Also I will probably also a wooden (laser cut) case for it.

LOL, it outputs monochrome composite video, in either PAL or NTSC.

With it's digitally generated nice clean front porch signal, it should be quite stable, and high contrast, contrary to ZX81's which needed a patch to fix the video signal. Should work with modern TV's (which the ZX81 often doesn't).

As ZX81+34 got some positive reactions, which I didn't expect, I realized I'm not completely convinced ZX15 is the best choice, so I created a poll.

This is your chance to influence how I will call my ZX81 clone.

mahjongg wrote:LOL, it outputs monochrome composite video, in either PAL or NTSC.

While the term NTSC is applicable to monochrome composite video, the same is not true of PAL.

Why not? They use different numbers of lines, (576i and 480i) and the original documentation also spoke about PAL and NTSC video.

But yeah, I know that "phase alternate line" describes the color burst system, but it does specify more than that.

Phase alternate line refers to one of the quadrature components of the modulated subcarrier (not just the burst). Monochrome video (such as the in original ZX80/81 and your implementation) does not have any subcarrier. Ergo 'PAL' is not applicable. 625/50 monochrome was in use before PAL was invented.

drgeoff wrote:Phase alternate line refers to one of the quadrature components of the modulated subcarrier (not just the burst). Monochrome video (such as the in original ZX80/81 and your implementation) does not have any subcarrier. Ergo 'PAL' is not applicable. 625/50 monochrome was in use before PAL was invented.

It most certainly is nitpicking, (and you told me nothing I didn't already knew, but for readers sake preferred to keep it simpler) nevertheless AFAIR the original documentation sometimes described the wire link that switched between both modes as the PAL/NTSC jumper, (and later talk about it certainly does) but yes, for fact in some cases it is described only as "US only components" then some in some other cases as the 50/60 Hz switch.

In fact the actual ZX81 ROM disassembly doesn't talk about video mode either, but about "American versus British machines"

; This is a good time to test if this is an American or British machine.
; The US machine has an extra diode that causes bit 6 of a byte read from
; a port to be reset.

Yes, the PAL/NTSC is a misnomer, as the ZX81 produces a monochrome signal, and all it does is produce a different number of lines per frame, but call me stubborn but I still prefer the more practical notation PAL/NTSC. but its just a slight preference, and in my schematic I also use the notation 50/60 Hz.
whats in a name?

Why not call 625/50 monochrome SECAM? By your reasoning it is equally valid.

What should I have written, instead of "it outputs monochrome composite video, in either PAL or NTSC."

perhaps:
"LOL, it outputs monochrome composite video, in either 50hz or 60hz."?

Or perhaps "it outputs monochrome composite video, in either British or American video norm"
but then everybody would have asked, does it only work with British or american TV's?

PAL and NTSC everybody knows about, and it is understood what I mean, only nerds would have a problem with that.

I can say that because i'm one too.

Or do you mean it as an alternative to "it outputs monochrome composite video, in either PAL or NTSC."

Q: impressive. Give it HDM
A: it makes moving pictures appear by magic.

sorry won't do.... (talking about dumbing it down, jeez.)

But as a general comment, I like it!
Yes, it does. what about Dancing Demon for example.... LOL.
https://www.youtube.com/watch?v=-P0k0vmsuEQ

Make it into an acronym - IMPAM or something.

By the way I used to have a TI-99/4A, and that's a pretty cumbersome name. (I'm not entirely sure I quoted it correctly by the way.) Long names are OK I think - so many of the short ones have been taken!

Yeah, you have a point there about long names.
I prefer if there is some reference in the name to the original ZX81, at least the letters ZX, so no IMPAM, sorry.
But thanks for the input.

P.S. I'm thinking about another newer design, (for ca. 2017) a Retro computer with color VGA output, based on ARM (but not Linux).
My current name for it is RhoCoCo for Retro Home Color Computer (its also a pun on rococco, the style) with the Greek Rho ρ symbol as logo

Return to “Off topic discussion”