Re: Noise with 433MHz receiver

I did some further "research" and I am starting very slowly to understand what is going on here. Maybe I will put this in another thread because in my head and even on this forum so many things were/are wrongly stated.

andies wrote:I have measured the voltage of the 433-receiver. If no signal is present the receiver (measured to the ground) has stable 1,2V, approx. The needle is not moving.

Yes, the needle is not moving. But if I am putting a capacitor in between the voltage should drop to zero if it is DC. It doesn't. Hence, there is "noise", it is (HF) AC. This cannot precisely be measured by the voltmeter I have.


andies wrote:At the moment when I connect Data from the receiver with GPIO 17 or GPIO27 the voltage between GND and Data drops to zero (0.0V), regardless whether I push a button or make a cup of coffee (voltage meter impedance is 20kOhm)?!

Do you have an extra-trashy power supply? Just asking...

I know, once I was searching several months (!) for a strange error until I found out that my 1A couldn't handle the current

This time I have a 2,5A supply.
raspberry B, Noir camera, Mac Book Air, iPhone, Bezzera

I think I finally solved the problem. It is very embarrassing: "Somehow" parts of wiringPi got deleted. I cannot reconstruct what happened but it seems that I had two installations on my Pi. One manually installed version and another via apt-get. Then, the apt-get version was removed. In the end nothing worked.

I just realized that something was wrong with wiringPi, I installed it again with apt-get and now I get my signal. I cannot decode it but this is another story.

I am also trying to understand the signal my garage opener is sending I at least managed to record the signal the following way. I am running "sudo pigpiod" and then


Then I am pressing the button and then I am interrupting the recoding using CTRL-C. The file signal.txt is huge (around 120kB). BUT it is nicely written, for example:

Notice the following: The third line is much longer than all other lines. This seems to be recorded noise where the other lines seem to come from the signal. That way I was able to distinguish noise from signal! And indeed, I had about ten lines inside and two very, very long lines. I deleted the long lines and I believe that I recorded the raw signal from my garage opener that way. I will further analyze it and hopefully find out what that means.
raspberry B, Noir camera, Mac Book Air, iPhone, Bezzera

I just made a nice histogram with the numbers a simple

command produces over four seconds. Interestingly, the numbers around 20 appear very often. I was not aware that any particular device (weather station, garage opener...) was sending anything during those four seconds. 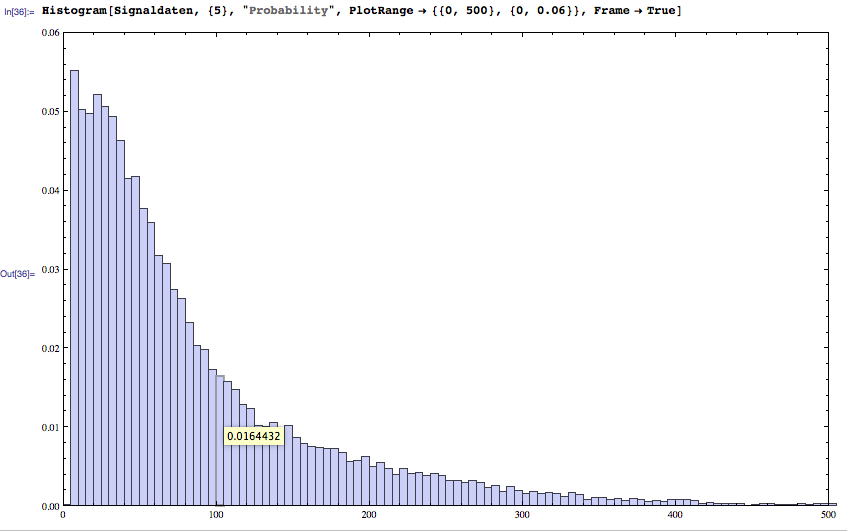 My son asked me to use this smiley:

A final remark. My ultimate goal was to analyze a garage opener from Came. My problem was that I used RFSniffer, debug and similar software - but they will output only signals they understand (=where the protocol is known). But Came's protocol isn't understood yet.

In this thread (https://forum.pilight.org/Thread-Came-d ... atic-gates) I described how I was finally able to understand/debug/re-engineer the signal. It is not tested yet, I will do that if the sender arrives (from Shenzen

). Maybe my approach is helpful for others as well.
raspberry B, Noir camera, Mac Book Air, iPhone, Bezzera

I did some further research (mainly because I am still unable to re-engineer my door opener) and I am about to come to the conclusion that with this kind of cheap receiver a proper analysis of a 433MHz signal is impossible. Let me explain why.

I started with a simple arduino program that produces a nice quadratic wave of, for example, 20kHz. Here is the code:


I checked this code by connecting the PIN D2 of my arduino to an oscilloscope. I could see a clear 20kHz-wave, the picture is below.

[EDIT] I am struggling with the pictures. Sometimes I can include them into the post, sometimes I cannot. Depending on what kind of hardware you are browsing the forum they are upside down or they are displayed correctly. I have no clue why and when. Therefore, I am simply attaching all pictures at the end of the post. Here original.JPG is supposed to be.[/EDIT] 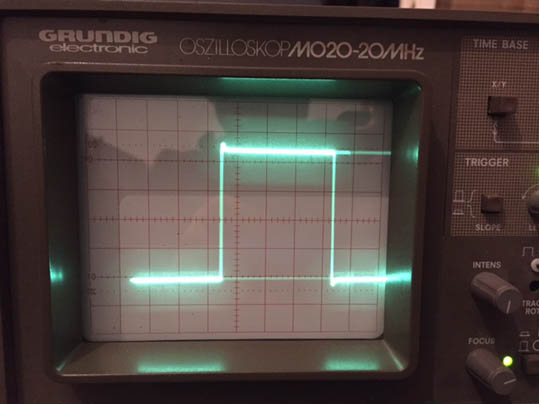 I later changed the "delayMicroseconds(50)"-line from the original value of 50μs down to 3μs and up to 700μs and always got the same result. So producing "nice" frequencies in the range of 333kHz to 1,43kHz is no problem.

The next step was to interrupt the direct connection

and place the 433 MHz transmitter and receiver in between

Ideally, the oscilloscope should show the same frequency. If not, it is a problem of either the receiver or the sender. Again I changed the frequency/microsec and now I got a completely different picture. Below are the results of 5μs and 25μs delay (corresponding to 200kHz and 40kHz):

Since I cannot add more than three files I will continue in the next post. 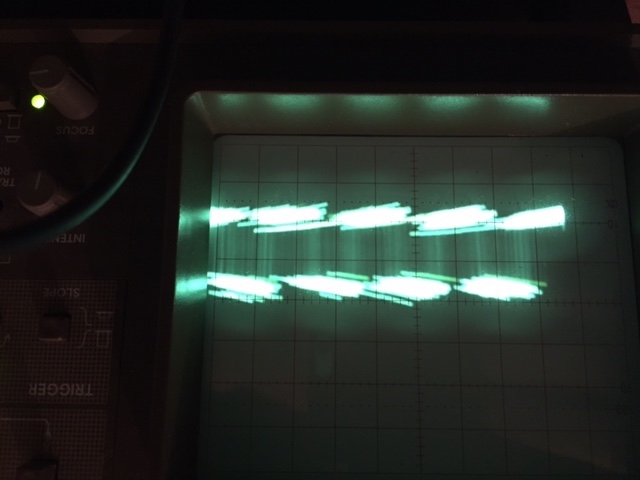 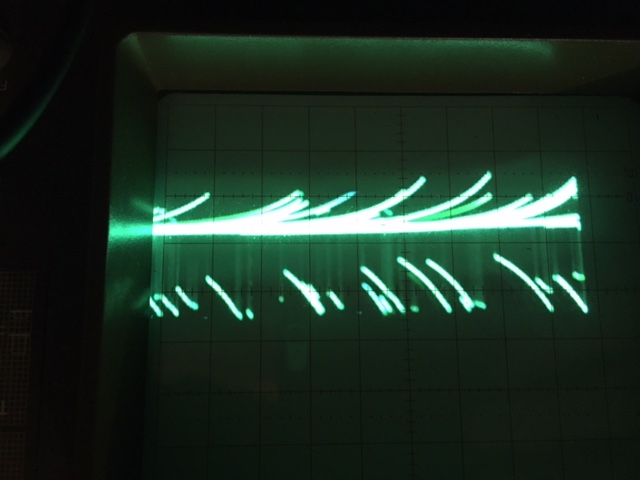 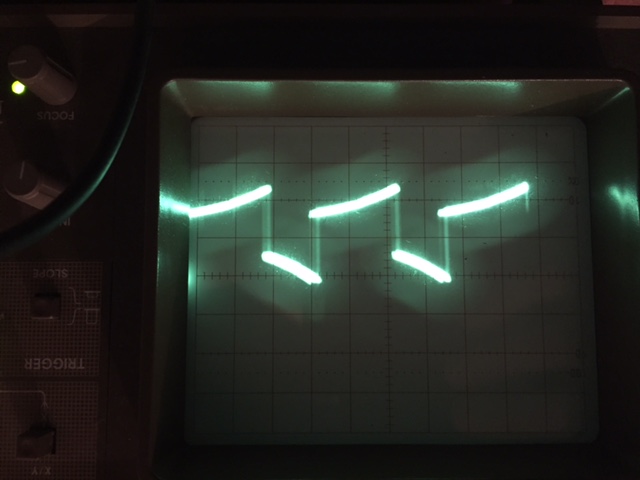 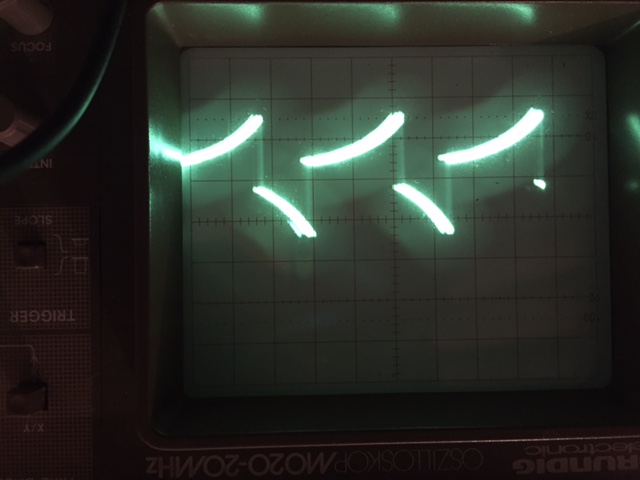 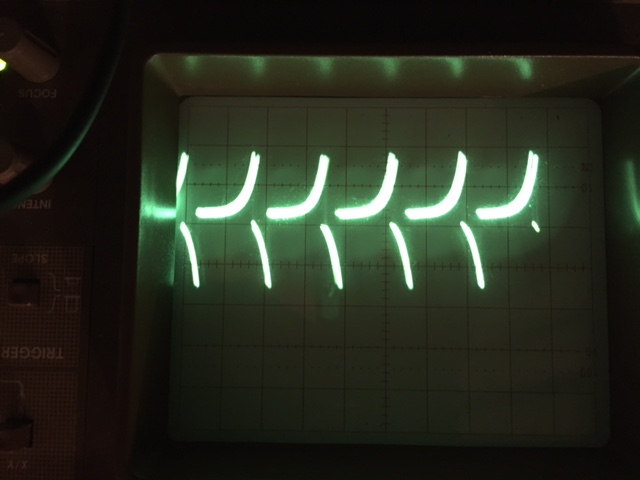 [EDIT]As in the above post I have no clue why all pictures are upside down on a desktop computer (they aren't on my iPhone). Notice that HIGH is shorter then LOW, maybe your picture is wrongly displayed! The exact relation is not that important, the bad thing is the asymmetry between both.[/EDIT]

What is clearly visible is the following: This is very bad news. I am certain that my door opener uses a microsec of 200 and above. But then the important signal is in a range where the receiver (and I suspect the receiver to be the culprit) is not able to give me a clear signal. The wave is far from being quadratic. If this wave is now analyzed I will not get a proper number as time difference between HIGH and LOW but a completely wrong distance will be reported. I would be able to analyze that signal if my "low-pass filter" (=the kind of software tool that tries to get rid of the noise you see in these pictures; unfortunately it does not filter low pass waves - but this is a different story) would know the precise mathematical form of these distorted waves and take this into account. In my experiment I am lucky that I do know what the correct signal and wave form is. But with my door opener I do not enjoy this luxury. I am stuck.

If the opener would be working in the higher frequency range (between 6kHz and 20kHz) this receiver would do its job. But outside that range the task of re-engineering with this tool seems to be a mission impossible. I have to get another receiver.
raspberry B, Noir camera, Mac Book Air, iPhone, Bezzera

I looked at my tools again. I used two different transmitters (Superregeneration or XY-MV-5, for example http://www.avc-shop.de/433Mhz-Sender-Em ... T-XY-MK-5V and superheterodyn, for example http://www.ebay.de/itm/like/40115812458 ... noapp=true - both are mentioned in many posts) and the same receiver (RXB 12 - until now I have only this one). I made several histograms which I will show in a moment but with both senders the pictures were more or less the same. Hence, I conclude that the problems I described have to do with the receiver, not the transmitter.

I used an arduino to send particular signals to the sender. These signals were all like

Then, I placed the receiver next to the sender and recorded the signal using pilight-raw. Pilight-raw reports numbers. I then plotted a histogram of those numbers using Mathematica. The ideal result would be: I am sending 50-50 and the histogram shows me a peak at 50 and no other numbers. This in fact happens with 50-50 but this seems to be the only case. I already mentioned that it will not turn out that way if one deviates from 50-50 but my question was: What exactly does the receiver show? How "wrong" is the result? Now I will present three pictures of 13 recordings. 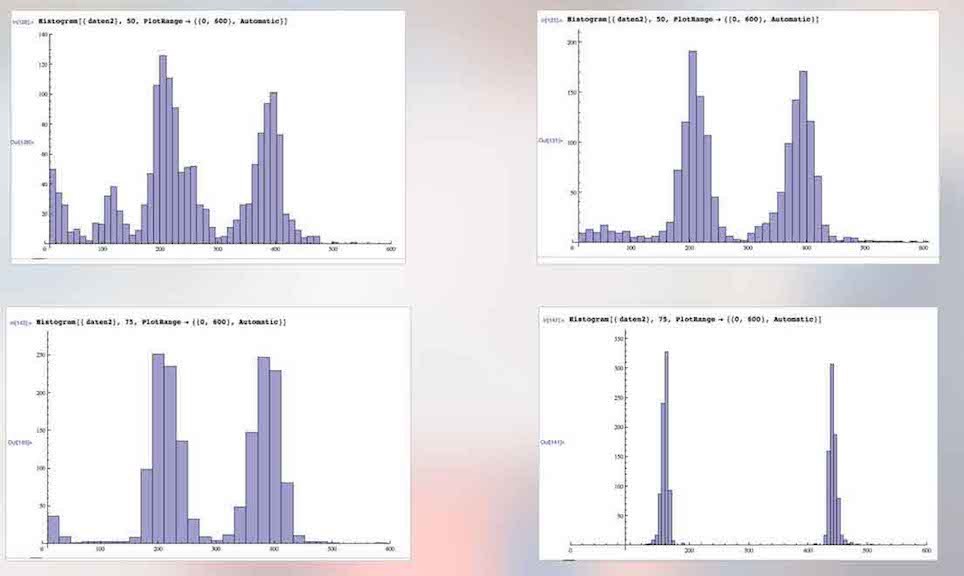 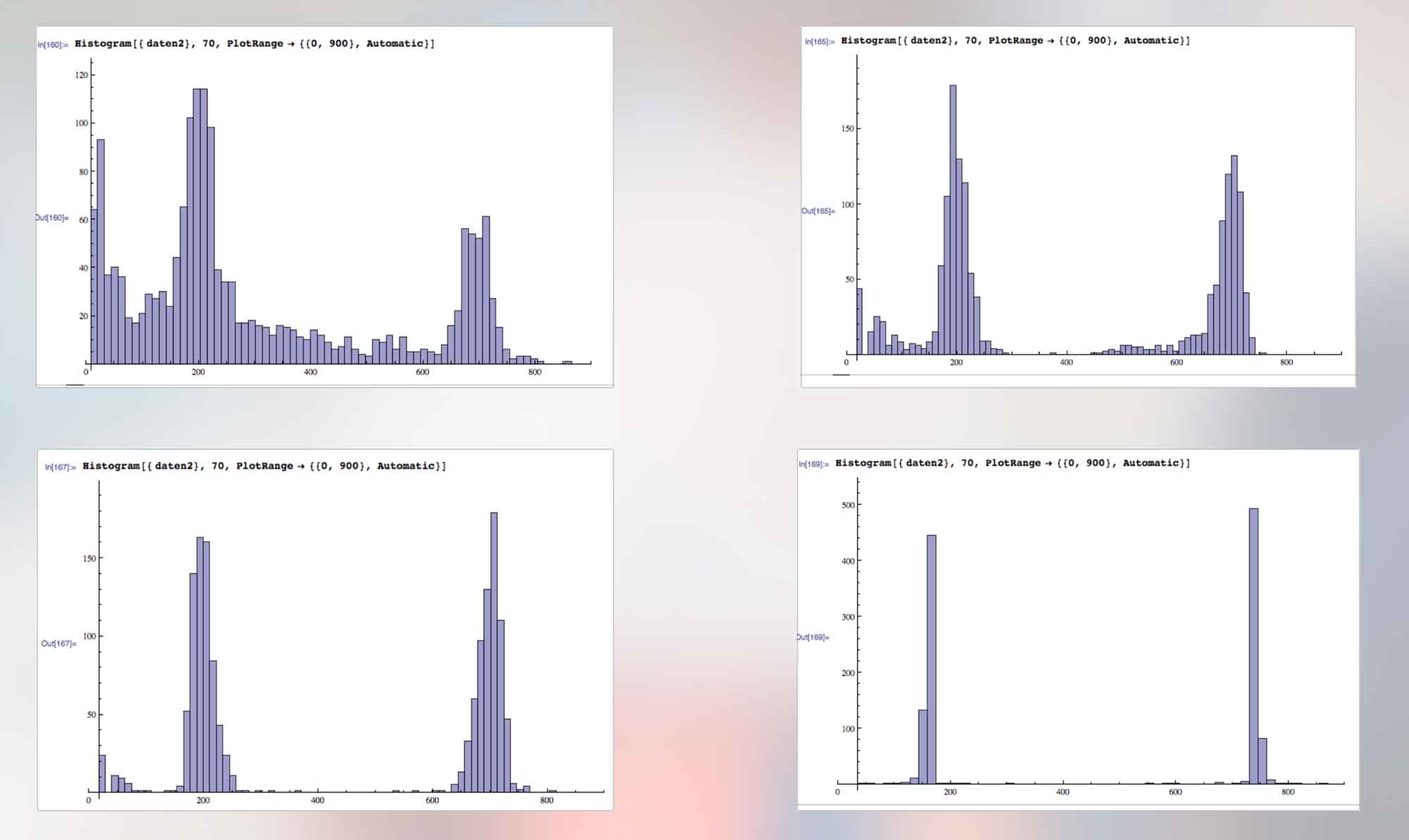 The first and probably most important message of this post is: You cannot rely on any reported number that is above 50. The second message: I do not see how we can easily construct a "low-pass filter" given this observation (see, for example, this wiki entry: https://wiki.pilight.org/doku.php/low-pass_filter). Such a low-pass filter should be able to reengineer from 200-800 that I have been sending 500-500?! And the third message: At least there seems to be some regularity in the receiver's bug when reporting some signal?
raspberry B, Noir camera, Mac Book Air, iPhone, Bezzera

I got a new receiver a few days ago, both from the guy who maintains pilight (see https://www.pilight.org/shop/#sender). The difference is stricking. Even if I am simply recording the signal from the garage opener I do not get any noise at all as this "screen shot" from the raw data shows:


So the solution with too much noise is: Get a better receiver. No low-pass filter, no capacitor, no software. Just spend 10$ instead of 1$.
raspberry B, Noir camera, Mac Book Air, iPhone, Bezzera

Re: Noise with 433MHz receiver

Joan: I read that I can decode as well as transmit codes to a 433-device. What I do not understand is the following. If I am decoding a code I get the information of low signal, high signal and intersignal length (three numbers) as well as the actual keycode. But the Readme says that it is enough to transmit with

How is this possible if the three other numbers are missing?

PS Maybe I am in the wrong thread. Can you point me to the correct one?
raspberry B, Noir camera, Mac Book Air, iPhone, Bezzera

Most devices seem to use pulse lengths of 300µs and 900µs, so those values are the defaults used to send the codes.

joan wrote:They can then be used to configure the send side if needed.

How is this done? I did not find any argument for the command line.
raspberry B, Noir camera, Mac Book Air, iPhone, Bezzera

joan wrote:They can then be used to configure the send side if needed.

How is this done? I did not find any argument for the command line.

So how to resolve the noise?

I'm trying a similar experiment and am running into the same issue. Which receiver/transmitter did you purchase?