I'm observing some temperature problem with my camera board lately. I've installed the raspberry with camera board into an outdoor-camera housing to use it as a weathercamera.

As outside temperatures reach about 0°C the image taken by the cam gets blurred (while the image center still remains relatively sharp). I haven't looked up but I guess that the camera board runs out of spec when ambient temperatures below 0°C are applied - so I'm not expecting official support on this issue. But probably someone has already experienced this problem...

One can see that as soon as the sun hits the camera board directly, sharpness gets a boost. On the lower right corner you can see the outside temperature (captured by an external weatherstation) which didn't really change. I also made a script that stores the CPU-temp. each time the raspi takes a picture.

Unsurprisingly the CPU-temperature (which can be taken as a weak indicator for the temperature inside the case) shows a huge difference. @pic1: 26,1°C; pic2: 32,6°C. It stays stable, when no sun hits the camera directly.

What could be the reason for the camera to blur when it's cold? Is it possible that due to mechanical expansion of the lens/sensor/plastic the image gets defocused? Are the lenses for the camera board focused to infinite or hyperfocal when they come out of the factory (just to have a clou - if defocusing is the cause - in which direction I should pull the focus as a compensation).

However... I think installing a heating inside the housing seems to be the best long-term solution. But as a quick fix, I guess shifting the focus also could work. What do you think?

Another (more graceful) workaround could be: installing a heatpipe from the CPU to the camera board and using the dissipated heat to heat the camera. Though I'm afraid this could kill the camera board in summer...

Could it be condensation on the lens?
Principal Software Engineer at Raspberry Pi (Trading) Ltd.
Working in the Applications Team.

Does the camera actually have an adjustable aperture? Sometimes the aperture automatically stopping down can sharpen up an image. Just a thought.

No there is no aperture control. Fixed aperture, fixed focus,
Principal Software Engineer at Raspberry Pi (Trading) Ltd.
Working in the Applications Team.

Hmmm perhaps it is just condensation then.

By the way the data sheet "OmniVision_OV5647.pdf" quotes the stable image temperature range as 0-50 (deg C). (Pretty ironic as the front cover photo is a load of smarmy looking skiers!) Anyone have any idea why there are two temperature ranges listed? I thought thermal expansion couldn't be the cause at first, but maybe it could be...?

I doubt it is moisture/fog, that looks different. My guess is temperature. 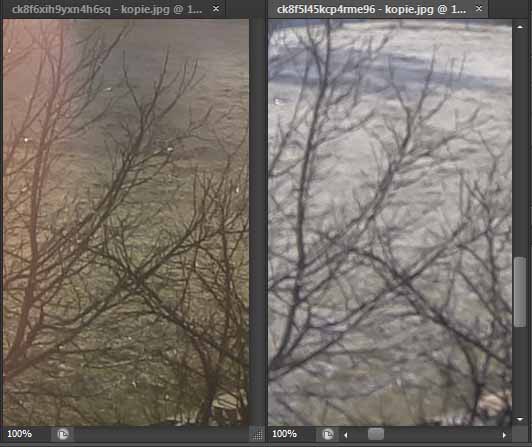 jamesh wrote:Could it be condensation on the lens?

Nope. This was also my first thought too... but there's no visible condensation on the lens. Although it's pretty hard to say considering it's size.

And: I think I can distinguish the effects of condensation from other IQ-problems as I already experienced condensation when shooting pictures with a common camera (for example: look at the trees at the left border of the images. There's double-contour visible which could be a sign of defocus. Condensation usually affects the contrast and produces more even softness.)


Ravenous wrote:Anyone have any idea why there are two temperature ranges listed? I thought thermal expansion couldn't be the cause at first, but maybe it could be...?

Just for the sake of completeness: the problem already occurs around temperatures of about +8°C - not only below 0°C.

But I haven't had the chance (and will) to change the focus yet - so I still can't tell if this would fix that issue.

I don't think it's likely that there is anything electronic that would cause blurry images in cold temperatures. If it isn't water film condensation, I would guess it's thermal tempco of the housing that is moving the lens out of focus. Dew does form at night on exposed surfaces and if you did have a thin continuous film of condensed water sitting over that tiny lens forming a second meniscus lens in front of it, I don't know how you would know; it could be very difficult to see directly.