Hi guys I purchased a JBtek Latest Version 3.5 " inch TFT LCD 480x320 RGB Pixels Touch Screen Display Monitor For Raspberry Pi with Raspberry Pi Transparent Case Kit [May 2014] from Amazon, http://www.amazon.com/gp/product/B00L15FOF4. And I can't figure out how to make it work. Does anyone have a step by step guide on how to set this thing up? The guide from the product page has some info but I can't figure out how to edit the files. I'm fairly new to raspberry pi and any help would be appreciated. Thanks

Nobody can help? or nobody has purchased this product?

Got same device, can not make it work. Does not even light up when connected. I connected it so it would fit in the case. Download .rar file. Unpacked it on PC. folder. Sent it over to the RPi with WinSCP. Followed instructions but several problems. Went to makefile using sudo make and nothing much happened but when i manually put compile command gcc -oo in, it did seem to work but did not take very long. mzl350i program did not work. Got bad command error. Also, LCD script file was invalid to be put into the init.d. All it does however is call for the mzl350i program that does not do go-states invalid. SPI listed EPM3032 to xpt2046. I2C to at24co2 . Display controller ili9481, touch panel xpt2046.. Went to put LCD into the init.d file. sudo update-rc.d lcd defaults gave error, lcd not recognized as valid file.

That looks like a nice display and case! From a quick look at the software (and the marking on the back of the PCB) I would think that this board was produced by the same people who made the Tontec and mztx-pi displays. The issue with all these displays is that they are nice displays, but the software appears to be an issue.

The best way to get any of these displays working is to use Notro's fbtft, however at the moment the ili9481 display controller does not appear to be supported.

AndyD wrote:...however at the moment the ili9481 display controller does not appear to be supported.

The PiScreen on kickstarter appears to use the ili9481 display controller.

Tried to boot with notro tbtft boot image with modules included-no go as expected. I have found the ILI9481.c driver file but do not know what to do further. The MZL350i file software that you download does not make an executable file. Ran make using command in makefile but I believe were errors. http://www.displayfuture.com/Display/da ... er/ILI9481. pdf
https://github.com/wiko-sources/cink-sl ... cm/ili9481

The following link is supplied on the Amazon product page, for drivers.

I tried these steps, along with the generic LCD driver steps, several times to no avail. I'm really hoping somebody figures this out.

Got it working, sort of. Screen came up. copied the mzl350i file to /usr/bin after doing the compiling.
I was also playing around at this website http://michlstechblog.info/blog/raspber ... h-i2c-bus/
Have not gotten the lcd script for the init-d to work so far
Last edited by markwwo4mw on Thu Jul 10, 2014 2:07 pm, edited 1 time in total.

Working better. Need to have a seperate terminal running in which sudo mzl350i is entered. Close shell and LCD freeze. I think is because don't have it in init.d.

Bought one as well and haven't had any luck setting it up. Im thinking it may be time to return it to amazon and look at other options, it was a sweet deal while it lasted though.

I think this will work if u can get it to come up on its own or without having opening up a shell running the program. Have not got the touch screen going but have not tried. 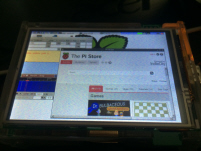 Got xterminal to come up on monitor, not LCD yet using instructions below. Looking for touchscreen driver install. Have not tried image referred to in the kickstarter project PiScreen. Need help to have the mzl350i program launch initially.
http://ozzmaker.com/enable-x-windows-on-piscreen/

I have one of these from Amazon too, and doesn't work as shown in the instructions. I don't know what I'm doing, but I do have the screen working. I followed the provided directions with these changes: First remove the hash tags from the Framebuffer lines. Then from within the mzl350-i-ext/src folder I typed sudo ./mzl350i then to make it turn on at reboot I added that to the crontab.

After at least a dozen reboots in last 36hrs it comes right on every time. I haven't had any luck with making the touch work......

I'm new to Linux and Raspberry, but maybe orthers can build on that???

Well that is sad, they are sold out.

I've got the video on this working, but no clue what to do for the touchscreen portion. Anyone have any ideas?

No luck in getting touch screen to work. Tried with Notro/TBFT examples since tinyLCD35 is supposed to be close and with PiScreen which seems to nearly the same controllers. Also screen wont turn off on reboot and system locks.
Should of thought of buying PiScreen ( https://www.tindie.com/products/ozzmake ... pberry-pi/ but is in Australia.
Anybody have ideas.

Yes,it is not easy to get it light, after 3 days,I made it.

If you don't want do this ,you can try this screen. http://www.amazon.com/JBtek-320x240-Dis ... B00LGOS00G This screen has a more detailed description of how to make it work ,you don't need to take so much time,and it has a built-in virtual keyboard ,but it is 3.2inch. Hope it helpful.

I have recently purchased this display (JBtek 3.5") and am having difficulties getting an image. If I do not uncomment the framebuffer lines in boot/config.txt I can see a very blurry and torn image on the screen. However, if I try to uncomment the config.txt lines and set the frame buffer for 480x320 I get an error message stating "Read < 0 chars when loading file ss..." pertaining to config.txt.
I am sure somebody else has run into this. Would anybody who has this display working be kind enough to shed some light? I am on day 4 and not making headway. I am familiar with where the error is coming from (in the mzl350i.c file), I just don't understand how to resolve the problem.
TIA.

Just received mine today as well. Looks nice when it works.

Having trouble with it blanking on me after awhile though. Any one else having these problems?

Also does anyone know how to lower the 100% cpu usage or rotate the screen to portrait?

This seems to me like it is going to sleep (Mine does it too) try disabling sleep.

nano /etc/lightdm/lightdm.conf
change
#xserver-command=X
to
xserver-command=X -s 0 -dpms
then save and reboot (Mine did not recover from reboot very well. if you get random blocks of screen just unplug pi and plug it back in. Should boot fine. I suspect since it is writing to the screen with SPI it might have an incomplete packet which is messing everything up. Power cycling it will clear it back to defaults)

Side Note: If your screen looks fuzzy you may have not taken off the thin plastic protector on top of the screen yet.

HI
I bought at the auction Disp LCD:
http://www.ebay.pl/itm/301239157191?ssP ... 1497.l2649
Unfortunately does not work, the seller has no idea why ...
The manual is wrong?
Has anyone met with this display?
Can someone did run the display?
I tested at RPI 512 MB ​​model B (no B +)
The latest version of Debian Wheezy Raspbian.
Definitely need to turn ON in this distribution, the SPI interface (in the original instructions do not write about it) because this connector, (the default is off)

I also have this item. have been trying for days to get it to work, the seller is no help, have turned on spi and i2c. alll i can get it to do is turn on the back light. have tried all of the items in this thread. to no avail. noob with linux and the pi. have 3 model b rev2 1 model b rev1 and one new b+

Oh, that salesperson deceives us?
I do not know if it really works?
Does anyone have any experience yet?
It get in the general display processor is not loaded software?
Several people here have experimented, but whether with the same LCD?
Locked
83 posts